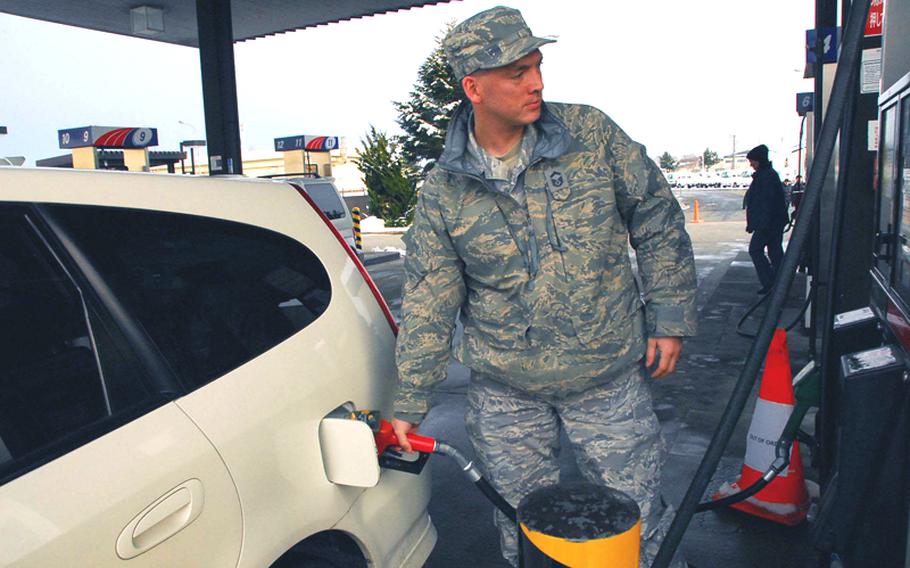 MISAWA AIR BASE &mdash; Shortages of fuel oil caused by the widespread destruction from the earthquake and tsunami might force some military community members who live off base to seek shelter on the base, an official said.

Col. Michael Rothstein, commander of the 35th Fighter Wing, has asked his staff to find accommodations for those who run out of heating oil in their off-base homes. Options could include housing them in vacant units on the base.

The deadly quake and tsunamis that ravaged hundreds of miles of coastline in northeastern Japan disrupted resupply lines for the region. Officials from the Aomori Oil Commercial Society, an organization for gasoline retail outlets in the prefecture, said supplies of gasoline and heating oil have been scarce since the earthquake.

&ldquo;The situation is very severe,&rdquo; said spokesman Satoshi Miura, saying that only 30 percent of gas stations in the prefecture were open Wednesday. But their tanks will soon be empty &ldquo;with no supply ... coming,&rdquo; he said.

During an interview Wednesday in his emergency operations center, Rothstein said he wanted &ldquo;prudent planning,&rdquo; so the base could be ready for the possibility &ldquo;in an elegant manner,&rdquo; instead of simply reacting to a problem.

In the five days since the quake, power and heat have been restored to all housing units. Residents can shop at the base exchange, and the food court is open. The commissary, which started selling goods in front of the store just hours after the quake, has been resupplied with the items that were in demand, including batteries, candles, charcoal and flashlights. Defense Commissary Agency officials said Wednesday that rationing of food and other necessities was not expected at any commissaries in Japan because regular deliveries are being made.

On Wednesday, Misawa&rsquo;s AAFES gas station received more fuel, which will continue to be rationed. Customers who have less than a quarter of a tank are authorized to purchase 10 gallons of gas. The military has its own contracted gas supply. The only other bases enforcing rationing in Japan were Yokosuka Naval Base and Naval Air Facility Atsugi &ndash; both in the greater Tokyo area. Customers there were limited to 5 gallons of gas.

Col. Guillermo Tellez, commander of the 35th Medical Group, told community members during a briefing Wednesday in the Mokuteki Community Center that the base and surrounding communities would be spared the rolling blackouts planned across other areas of Japan to ease power demands. He also stressed a message coming down strong from the command: conserve. Conserve gas, conserve electricity, conserve heating oil. Commute in groups, take the shuttle bus that has started running, and turn off unnecessary lights.

Rothstein said that since the base is on pretty steady footing, the priority now turns to what the U.S. military is calling &ldquo;Operation Tomodachi,&rdquo; helping the Japanese communities hardest hit by the quake, tsunami and hundreds of aftershocks.

&ldquo;Five, 10, 50 years from now, you&rsquo;ll remember being boots on the ground,&rdquo; helping the Japanese with their relief efforts, he said during a command briefing.

And as relief efforts continue, he wants Misawa airmen to be ready for any tasking they&rsquo;re given.

&ldquo;I have no major limitations now,&rdquo; he said.

Chiyomi Sumida and Dave Ornauer contributed to this report.