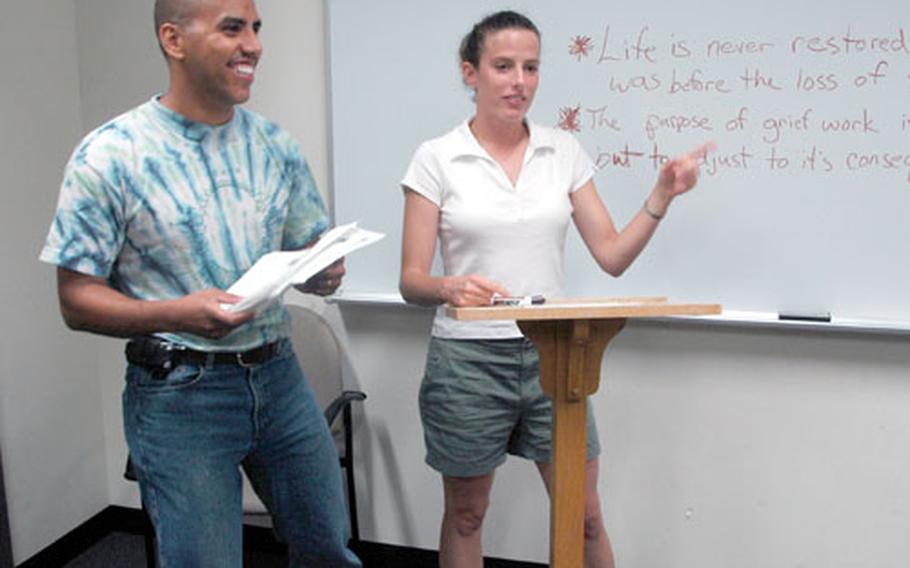 SASEBO NAVAL BASE, Japan &#8212; People here suffering from grief caused by losses such as the death of an immediate family member now have a place to turn for support.

The Grief Support Group meets at 7 p.m. on the fourth Thursday of each month at the base&#8217;s Community and Education Center. At the group&#8217;s first meeting Thursday night, those attending learned grief is not only caused by someone dying.

There also is a great deal an individual can do, she said, adding the first key realization for a grieving person is reality acceptance.

&#8220;Life is never restored to the way it was before the loss of someone close,&#8221; Miller wrote across a message board in the meeting room.

Miller, family practice manager at Sasebo&#8217;s Navy Branch Medical Clinic, and base command chaplain Cmdr. Harvey Ranard discussed the idea of the group a couple of months ago.

&#8220;What&#8217;s important is not that we attract classrooms full of people, but that people who find themselves suffering in this way have an outlet &#8230; and a group of willing supporters who understand what they&#8217;re going through,&#8221; Ranard said.

&#8220;Plus my background is working ontological nursing [cancer patients], so I learned about people facing loss. I enjoy being there for them, so it has become my professional passion.&#8221;

Also helping get the organization off the ground is Petty Officer 1st Class Aaron Thomas, an addiction counselor at the Navy Branch Medical Clinic. He said many of his clients &#8220;have a powerful, unresolved grief in their past.&#8221;

Several years ago, Thomas worked in an intensive care unit, where some patients are not expected to leave alive. Thomas took care of those patients, got to know them as people and got to know their families. The experience taught him tremendous lessons about grief and the impact it has in the lives of survivors, he said.

One person attending Thursday has had a spouse deployed for at least seven months. Some of the symptoms the individual described are the same as those endured by people who&#8217;ve lost a loved one.

There are hundreds of family members in Sasebo with spouses deployed for at least the next six or seven months. Miller hopes these people come to the Grief Support Group meetings.