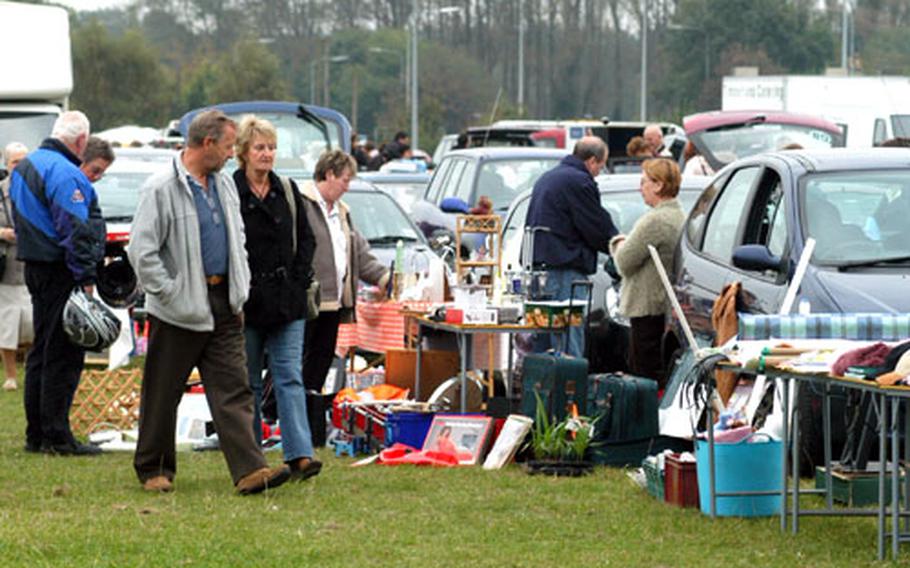 Bargain hunters search for deals at Saturday&#39;s car boot sale in Barton Mills, near RAF Mildenhall. The next sale is slated for Oct. 20 from 8 a.m. to 2 p.m. (Sean Kimmons / S&S)

Bargain hunters search for deals at Saturday&#39;s car boot sale in Barton Mills, near RAF Mildenhall. The next sale is slated for Oct. 20 from 8 a.m. to 2 p.m. (Sean Kimmons / S&S) 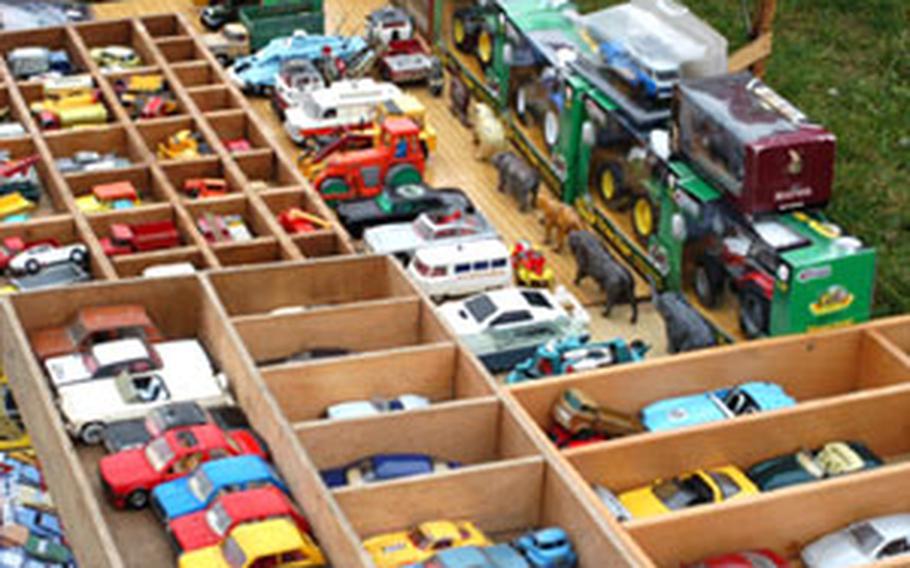 An arrangement of old and new toys for sale at a recent car boot sale in Barton Mills. (Sean Kimmons / S&S) 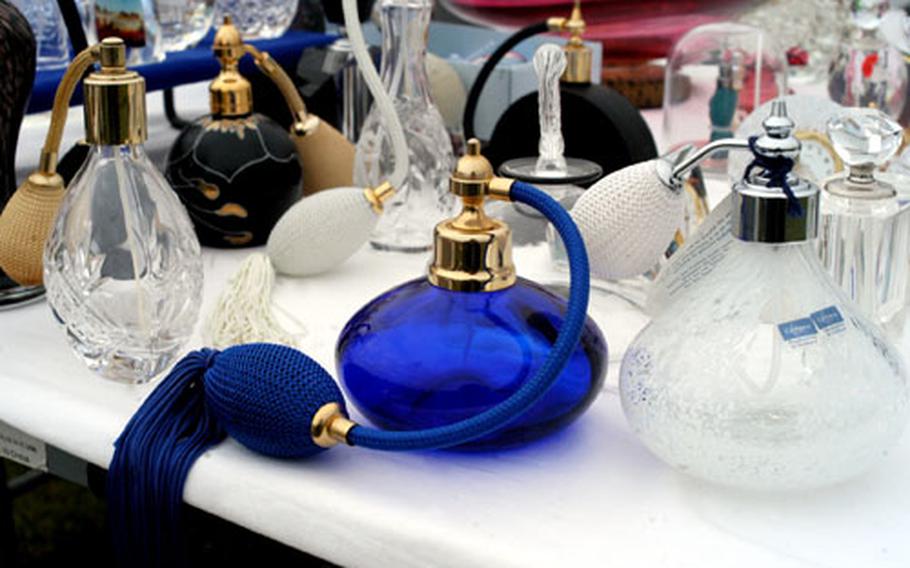 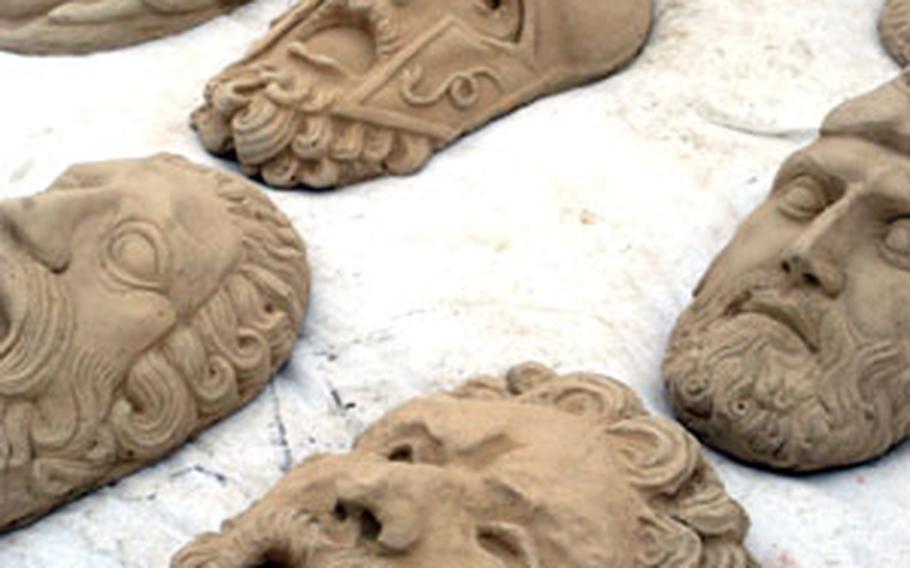 Greek-style masks, made out of concrete, were for sale at 3 pounds each. (Sean Kimmons / S&S) 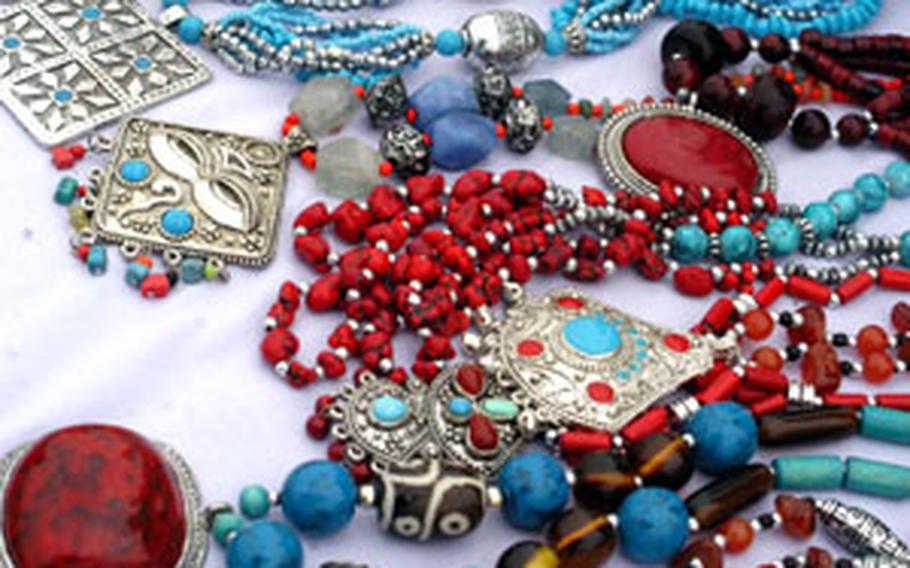 BARTON MILLS &mdash; No velvet Elvis paintings for sale, but there were plenty of other off-the-wall to essential items to be found at a car boot sale Saturday in this sleepy English village.

Bargain hunters usually converge on a grass field in the village along the A11 highway, near RAF Mildenhall, every other Saturday in search of treasures being sold by vendors working out of their vehicles.

A handful of British coins go a long way at a car boot sale, also called a yard sale, and Saturday was no exception. And with the exchange rate heavily favoring the British pound over the dollar, outgoing airmen can get rid of unnecessary items for a decent price.

&ldquo;If they&rsquo;re going back to the States, they should bring their stuff here. They&rsquo;ll be able to get a fair price,&rdquo; said Barton Mills&rsquo; car boot sale promoter Nigel Warin.

Warin estimates that his huge yard sale brings in an average of 100 vendors and as much as 1,000 bargain hunters every event. There&rsquo;s no cost to rummage through the vendor stands and parking is free. As for those who are selling, one pitch costs 5 pounds, he said.

&ldquo;You don&rsquo;t even need a table. All you need is your vehicle and a sheet on the grass. You could be surprised what all your bits and pieces could sell for,&rdquo; he said.

Looking to lighten her load before she departs the country was Senior Airman Elizabeth Garmendia from RAF Lakenheath&rsquo;s 48th Communications Squadron.

&ldquo;I&rsquo;m PCSing [permanent change of station] in two weeks. Just trying to sell off some stuff or I&rsquo;ll just donate them to the Airmen&rsquo;s Attic,&rdquo; the ground radio maintenance journeyman said.

Garmendia said she was impressed by the response she had received from shoppers roaming in and out of the sale.

&ldquo;They must like Americans here. I had people opening my car door to see what I had when I arrived here at 7 a.m.,&rdquo; said Garmendia, who was selling clothes from her car.

Les Thompson, a British national, traveled all the way from the Midlands to sell his concrete garden sculptures. Local garden centers tend to purchase a majority of his work, he said, but he finds car boot sales the perfect venue to get rid of the small items.

&ldquo;These prices are rock bottom compared to those sold in garden centers,&rdquo; he said about his Greek and Romanesque masks, plaques and busts.

Warin said he would like to hold more car boot sales in Barton Mills every other Saturday until shutting down for the winter in December. However, he is currently facing opposition from the local community regarding the amount of traffic that come with the events, he said.

The next event is already set in stone for Oct. 20. As for other events, they are still up in the air, Warin said.

Getting thereThe next car boot sale in Barton Mills is slated for Oct. 20 from 8 a.m. to 2 p.m. A pitch costs 5 pounds; admission is free for those searching for bargains. For more information, call Nigel Warin at 07860 716075.

To search for a car boot sale in your area, check out these Web sites: www.carbootjunction.com or www.britevents.com/events_car_boot_sales.asp.