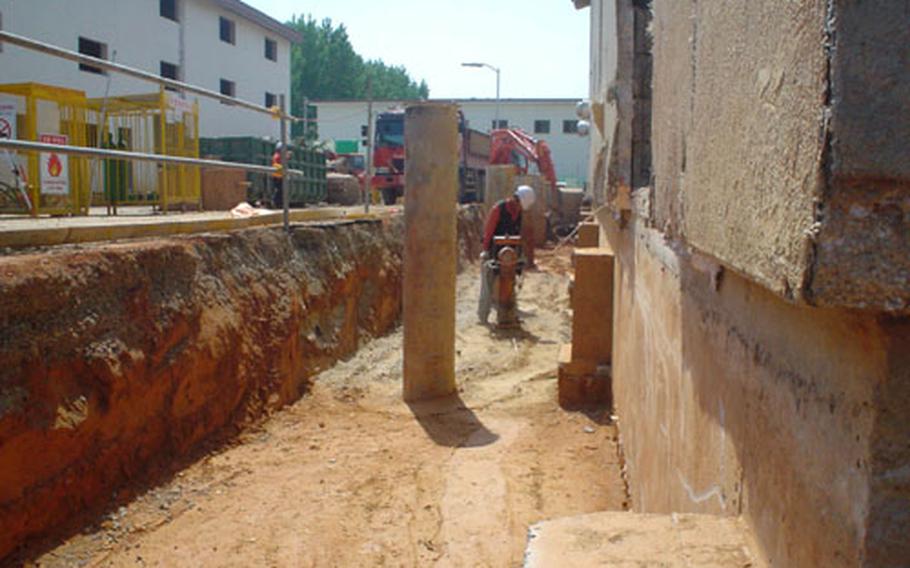 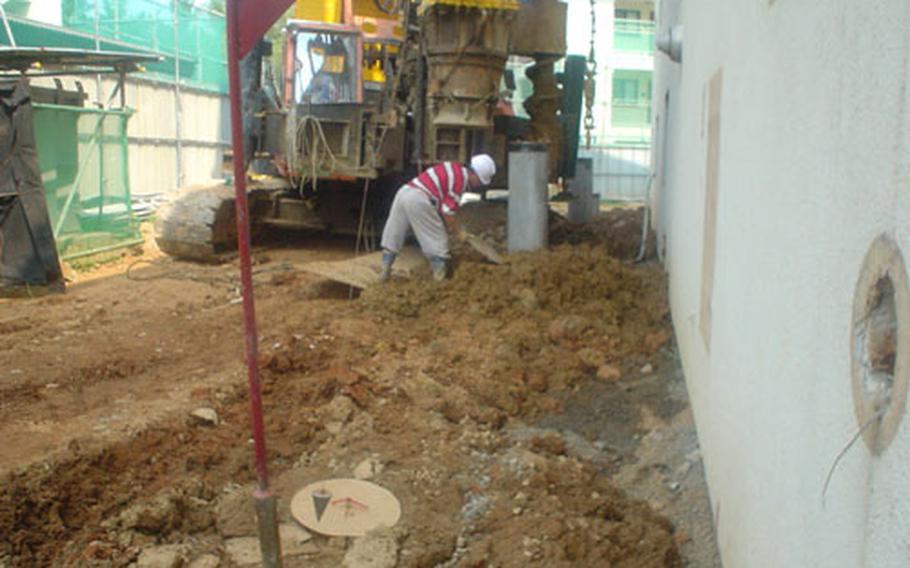 A worker compacts soil around piles going in at the site of barracks upgrade on Army&#39;s Camp Humphreys in central South Korea. (File photo courtesy of U.S. Army)

Senior sergeants at the Army&#8217;s Camp Humphreys in central South Korea soon will be assigned to living quarters raised to a size and level of quality unlike anything known to previous generations of noncommissioned officers, officials said.

Several barracks already are being upgraded so that senior noncoms in pay grades E-7, E-8 and E-9 will have what amounts to one-bedroom apartments, each about 703 square feet. A total of 204 apartments, known as senior enlisted bachelor&#8217;s quarters, or SEBQs, are planned, said Bart Mirabal, Camp Humphreys public works chief.

The post is a 1,230-acre helicopter base in the Anjung-ni section of Pyongtaek, about 45 miles south of Seoul, South Korea&#8217;s capital. Under a plan to consolidate and close U.S. bases north of Seoul, Humphreys will expand to house more units.

Each apartment will include a bedroom, bathroom, closet and a combined kitchenette-dining room-living area, as well as amenities including jacks for phones, cable TV and Internet hook-ups, said Mirabal.

&#8220;The design is the latest the Army came up with, where the senior NCO is going to get a one-bedroom apartment. &#8230; This is the first time in history that an NCO gets that much,&#8221; Mirabal said.

In the past, NCOs&#8217; rooms at Camp Humphreys would average about 270 square feet, Mirabal said.

Work started in September on five SEBQs, part of the base&#8217;s Barracks Upgrade Program. All are in the southern part of the base, in what officials call the &#8220;downtown&#8221; area &#8212; where the post exchange, commissary, chapel and other key buildings are concentrated, Mirabal said.

Of those five, one is to be completed in November, three next year (one each in March, June and November) and a fifth in March 2006, Mirabal said.

Two additional buildings eventually will be upgraded as SEBQs in the southwestern part of the base, he said. No project dates have been assigned for those yet, Mirabal said.

Another building, for junior enlisted troops, will have 76 rooms with one soldier per room, and space ranging from 118 to 140 square feet per room, Mirabal said. The structure, set for completion in November, brings to eight the number of barracks upgrades in progress or planned, at a total project cost of $31.5 million, Mirabal said.

Various construction firms are involved in the project under contracts with the U.S. Army Corps of Engineers, he said.

&#8220;That&#8217;s leaps and bounds from where we started through the NCO corps, and I think they&#8217;re actually getting a well-deserved, justified living space, based off their importance in the Army,&#8221; Whitney said of the Army&#8217;s senior NCOs.