Barracks in South Korea's Area I get 7,000 new mattresses 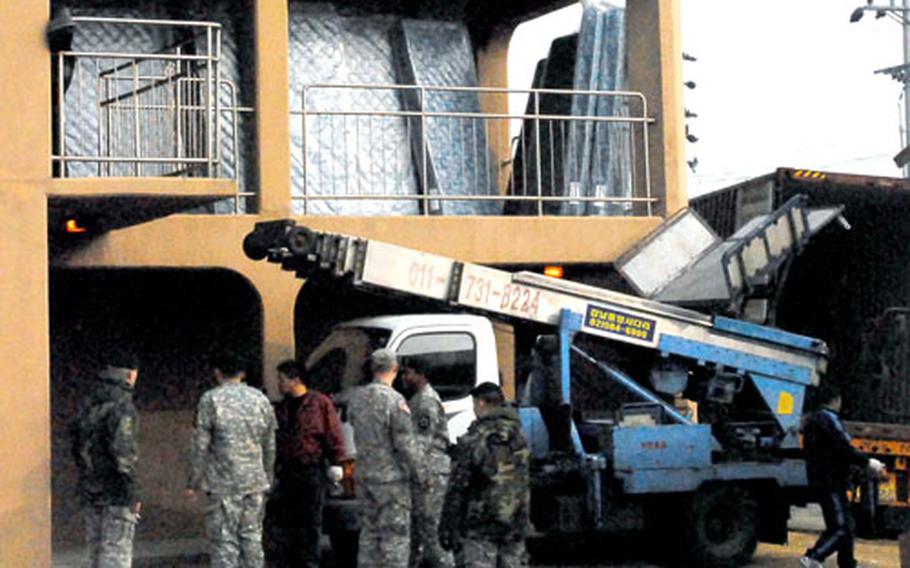 Area I public works trucks deliver new mattresses to a Camp Red Cloud barracks building in late March. Area I has replaced about 7,000 single mattresses and will begin replacing about 1,000 full-size mattresses later this month. (Courtesy of U.S. Army)

The area finished replacing more than 7,000 single mattresses in barracks living quarters in March and will begin replacing about 1,000 full-size mattresses by April 13, Area I director of logistics T.J. Welin said.

Most of the beds were at least five or six years old, Welin said.

Officials discovered that soldiers weren&#8217;t getting a good night&#8217;s sleep when the Army cleared out furniture from 15 bases it returned to the South Korean government between April and November 2005.

Welin said only about 28 percent of 80,000 pieces of furniture were considered serviceable.

While leading a discussion on efficient management with civilian employees last week at Camp Red Cloud, Area I commander Col. Rick Newton acknowledged that Area I had made a &#8220;shameful&#8221; mistake by providing its soldiers with poor bedding.

He worked with the 2nd Infantry Division to correct the mistake, he said.

Newton said he also is asking the Army for $46 million in facility upgrades over two years.

About $33 million would go to building repairs and upgrades, while $13 million would pay for replacement furniture and appliances in soldier barracks, Welin said.

Welin said he traveled to Huntsville, Ala., to meet with Army Corps of Engineers officials in April 2006 and found out why Area I hadn&#8217;t received any new furniture and appliances since the 2002-03 fiscal year. Area I was considered &#8220;closed,&#8221; he said they told him.

Area I&#8217;s closing date has been pushed back several times.

The goal was to move the U.S. forces in Area I to Camp Humphreys by 2008, but the new target date to have all the forces moved by is 2012.