Barnham: At military museum, past, present ... and a little movie magic 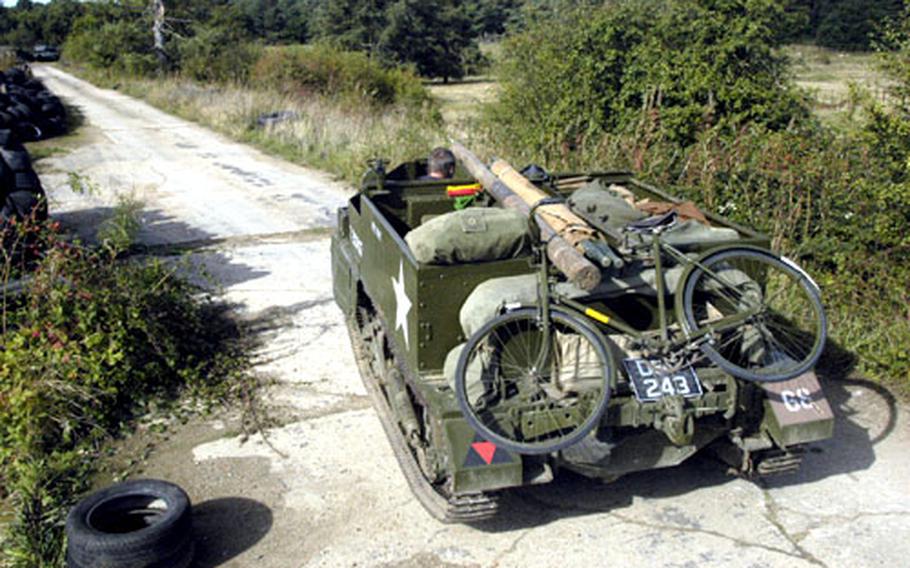 A Bren machine gun carrier moves toward the main entrance of the East of England Military Museum northeast of RAFs Mildenhall and Lakenheath. The carrier was used during military demonstrations during the summer and was recently returned to the museum. (Jason Chudy / S&S)

Bond, James Bond, and tanks, plenty of tanks. The East of England Military Museum, about a 20-minute drive northeast of RAFs Lakenheath and Mildenhall, is home to an eclectic blend of the past, present and even a little bit of movie magic.

The museum is located on the former site of the first World War I tank training grounds in buildings that once were used to create mustard gas for the U.S. and British militaries.

Like the site's early evolution from an armor training area to a chemical warfare base, the museum also is evolving, recently changing from tank-specific displays to broader military exhibits.

The museum is good for a quick visit with the kids or even a few hours of in-depth browsing.

A few of its tanks - and a vehicle that you'd swear is a tank until you learn its secret - were used in the Bond movie "Goldeneye," running through the streets of St. Petersburg, Russia, crashing through Perrier trucks and buildings.

The tank-that-isn't, located just outside the museum entrance, is really a Saladin armored car made up to look like a T-55.

The museum definitely is a work in progress, but that means that as the exhibits grow and evolve there will be more to see on repeat visits.

Walking through an exhibit of equipment from the 1982 Falkland Islands war, museum staff member Shaun Hindle explained how curators are going to add equipment and weapons from both British and Argentinean forces.

Hindle said that as the museum grows, so does its needs.

But despite that need, the museum has enough displays and equipment to keep a military history buff busy for hours.

And better yet, the East of England Military Museum is close enough to Lakenheath and Mildenhall that a visit won't take up a whole day.

The East of England Military Museum is about 20 minutes north of RAFs Lakenheath and Mildenhall on former tank training grounds and an old mustard gas factory.

From Mildenhall or Lakenheath, get on the A11 and head northeast toward Thetford. After about six miles, just past the small town of Elveden, turn right on Elveden Road. There is a small sign at the corner that's unfortunately best seen coming from the other direction. Another few miles, just past a few tight turns in the road, will be another right turn. There is a small sign stuck in the ground saying "tank museum." The museum is at the end of this road.

Costs: Adult tickets are 3.50 pounds. Kids tickets are 2.50 pounds and children younger than 5 are free. A family pass is available for 10 pounds.

Information: The museum Web site, www.tankmuseum.com, is a little outdated since the museum now exhibits more than just tanks, but it still gives visitors a good idea of the larger pieces of equipment on display. Information is also available by phone at 1842 89 0010.