Barhopping in Italy, but with a purpose 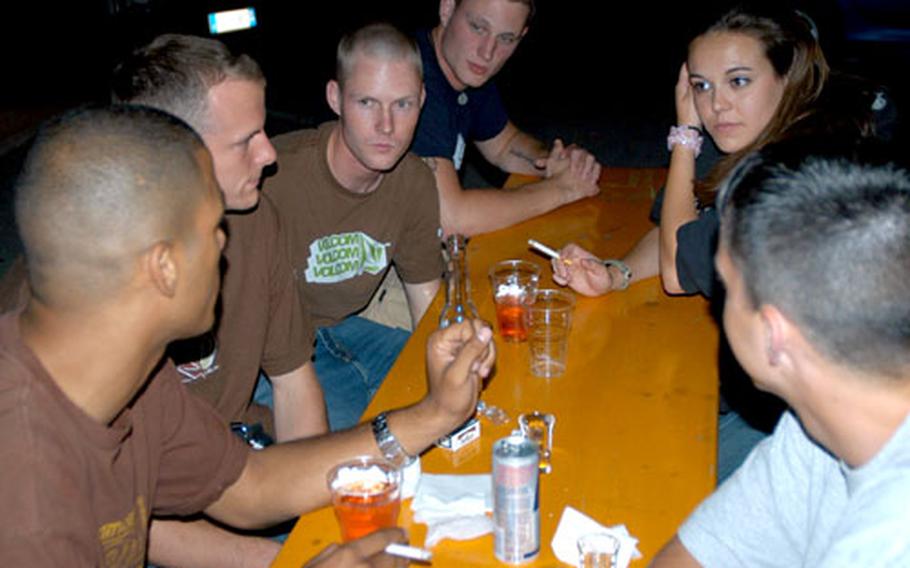 Senior Master Sgt. Arleen Heath, far right, checks in on a few patrons at California Bar on a visit by the Town Patrol during the July 4 weekend. Heath was one of those visiting with the dozens of Americans in the bar, making sure they had a way to get home without driving drunk. (Kent Harris / S&S)

Unlike the dozens of other Americans they encounter, they&#8217;re not necessarily out to have a good time. No drinks. No dancing. And no staying in one place for very long.

Not exactly the best customers for Italian business owners. But the Italians, who now are used to such groups, greet them warmly. Much more warmly than some of the younger Americans.

Not that those participating in the Town Patrol &#8212; a program targeting drunken driving and other late-night weekend problems at Aviano &#8212; don&#8217;t get any respect.

Staff Sgt. Robert Barlow, taking part in another patrol six days after Heath, Morris and three others conducted theirs, steps between two airmen who look ready to exchange blows.

Barlow, who towers over the other two, endures glares before the moment passes. He&#8217;s able to shrug off the incident and smile a few minutes later.

Capt. Eric Elliott, chief of public affairs for the 31st Fighter Wing, says the patrols aren&#8217;t an official part of the base&#8217;s efforts against drinking and driving.

Those participating on the patrols, which begin around 1 a.m., are all volunteers. Often, they&#8217;re from the same squadron. And usually they&#8217;ve been in the military for a while.

They&#8217;re not empowered to make arrests. If problems arise, they&#8217;re told to call back to base, which will coordinate efforts with Italian law enforcement agencies.

Though those on patrol are serious about what they&#8217;re doing, there are often a few lighthearted moments.

Maj. Jerry Partin walks up to a group of young Americans with drinks in their hands standing outside the California Bar and exchanges greetings.

One young lady is obviously not having her first drink.

Partin, serving on his fourth patrol, smiles and moves on to the next group.

And they&#8217;re probably headed back to the same place.

Boobe&#8217;s, a privately owned club several blocks away, is another stop. Master Sgt. VaTema Ivy, who is on patrol with Barlow, says that bars really aren&#8217;t her thing, but still sees a few friends there.

During a visit by Partin and Heath a few days earlier, there is no thought of sitting down. They walk into the tiny club, circle for a few seconds and walk out.

Partin says there aren&#8217;t any Americans there. How can he tell?

So they move on. There are still several spots to hit and daylight&#8217;s not far off.

Military DUIs by the numbers

Army, Air Force and Navy commands in Europe are sending clear and frequent messages about drinking and driving.

Yet servicemembers and Department of Defense civilians continue to pile up DUIs at a rate of close to three a day across Europe.

A package of stories in Stars and Stripes in March 2004 detailed efforts the military was making to combat what senior leaders from all the services said was a problem. According to figures supplied by the services, there were 1,306 DUIs reported in 2003, somewhat lower than the 1,438 in 2002.

USAFE officials said the command&#8217;s rate was 25 percent lower through June of fiscal 2005 compared with the same period a year earlier, but declined to elaborate.

The Navy, with the fewest servicemembers in theater, saw a dramatic fall from 2003 to 2004. Sailors and civilians on Navy bases had 57 DUIs in 2004, compared with 103 the year before. The rate for the first six months of 2005 is the same as last year, with 29 registered through June.

The Army rate of 81.33 per month is lower so far this year than it was for all of last year, but just slightly below the rate for the same six months of 2004. That&#8217;s because there were 88 more DUIs in the second six months of the year than in the first.

The lowest numbers for the Army came in February, March and April 2004, when the number of DUIs was in the 60s each month. During that time, both the 1st Armored Division and 1st Infantry Division, two of the larger groups of troops in Europe, had substantial forces deployed to Iraq.