Bare-bones Bondsteel is no suburban mall 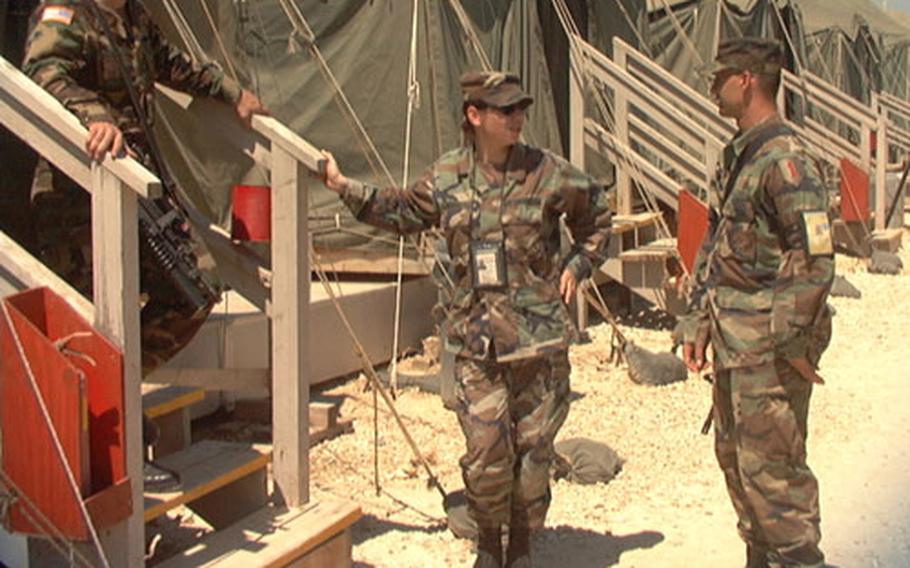 Sgt. Leandro Diaz, translator Eve Niceva and Pvt. Philip Robertin talk outside one of the living areas at Camp Bondsteel in Kosovo. Military commanders are using the utilitarian post as a model for new bases planned for Eastern Europe. (Ward Sanderson / S&S)

Camp Bondsteel may not be just tents, but the peacekeeping post military leaders point to as an example of future bases is certainly no suburban mall. Marine Gen. James Jones, commander of U.S. forces in Europe, recently said troops should expect a dismantling of most of the Little Americas in places like Germany as the military moves east.

Bulgaria, Romania and the Czech Republic have all been mentioned as possible homes to new bases. And these new bases will be leaner and meaner, &#8220;bare bones&#8221; in Jones&#8217; words, than the family-friendly enclaves to which troops have grown accustomed.

But beneath its austere appearance, Camp Bondsteel is a well-orchestrated and surprisingly modern operation. Though hardly comfy, the pragmatic post doesn&#39;t skimp on what commanders believe really matters.

Its three mess halls serve hot meals that wouldn&#8217;t be out of place in some restaurants. It has three gyms and basketball, volleyball and softball facilities. There is the requisite exchange for everything from CDs to toothpaste. There&#8217;s also a place where soldiers can get their uniforms pressed for $2. Troops enjoy air conditioning. And the base is soon to switch from bottled water to the H2O it produces on-site.

&#8220;We have a water plant that&#8217;s probably better than any in the States,&#8221; said Col. McKinley Collins, commanding officer of the Falcon Area Support Group, which runs Bondsteel&#8217;s infrastructure.

Some troops live within canvas roofs and wooden walls. Most, though, live in close, all-plywood barracks, what Collins called &#8220;old Vietnam-era SEA Huts.&#8221;

These South East Asia Huts are built upon wooden stilts &#8212; no concrete foundations to dig up when Uncle Sam says it&#8217;s time to go home. Large buildings, such as the gym, are made from quick-to-disassemble metal panels.

The colonel was not merely being hypothetical. Last month, representatives of Halliburton, the oil giant and parent company of military contractor Kellogg Brown & Root, inspected Bondsteel for ideas on how to maintain posts in Iraq. The military also announced last week that Halliburton would operate oil facilities in Iraq, a move that is controversial because Vice President Dick Cheney once headed the company.

The military&#8217;s move from the leafy avenues of Germany to the grit and canvas of camp life may be a tough sell to soldiers, one Special Forces veteran said.

Nevertheless Kalmus believes that could actually shake the military tree of its dead wood troops more interested in benefits and travel than in bullets and spit-shines.

Some 80,000 troops are posted in Germany, making it home to the largest cluster of American forces on the continent.

&#8220;Everybody who knows about U.S. defense policy knew right from the beginning that transformation finally would have an impact on bases,&#8221; said Otfried Nassauer, director of the Berlin Information-center for Transatlantic Security. He said the military has long planned to deploy lighter forces closer to the world&#8217;s hotspots, though the decision to shut bases in Western Europe was made later to save money.

Though he said some in Congress have tried to turn transformation into a means of rewarding and punishing nations based on stands on Iraq, Nassauer did not believe it would affect U.S. and German relations in the long run.