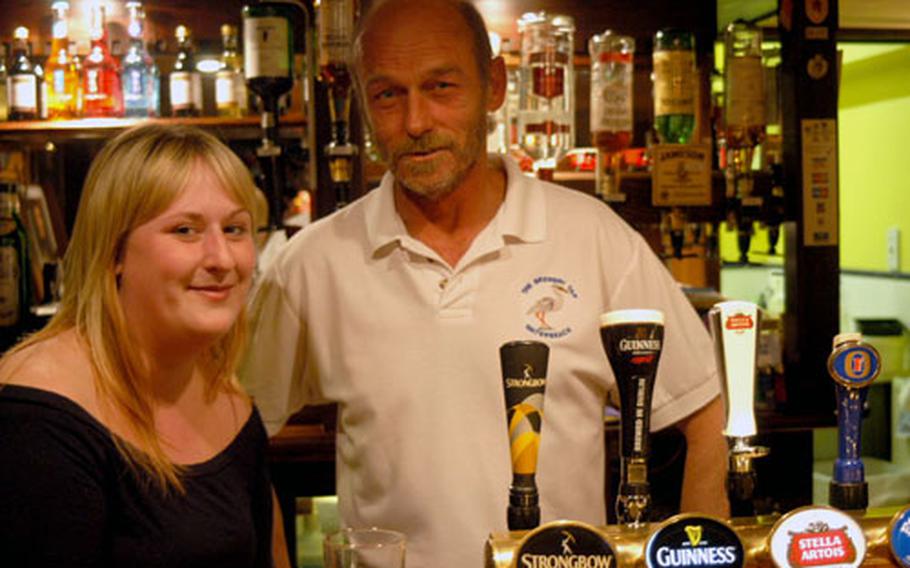 WATERBEACH &#8212; It&#8217;s probably best to just get it out of the way: The Brewery Tap pub near the American housing complex in the little burg of Waterbeach, north of Cambridge, doesn&#8217;t actually brew beer or ale.

It used to, eons ago, but now it just serves the suds, said co-owner Ken Napier.

It&#8217;s a pub that befits the diminutive, mellow nature of Waterbeach, a small community a few miles from the city and home to 34 American families. It&#8217;s a one-room pub with sparse decoration or flavor, small bar, small menu, small beer selection.

But the TV is huge. Set in one corner of the vaguely L-shaped Brewery Tap, the screen is one of those massive mini-cinemas that draw in the fellas on game night. During a recent Arsenal game, about two dozen local boys flitted around the TV, drinking lager and watching the home favorites hold an Italian team to a nil-nil tie.

Despite its traditional simplicity, the Brewery Tap does have some sporadic individual attractions.

Take Ziggy, the local reggae singer who performs occasionally in the pub. Sporting nearly thigh-length dreadlocks (they&#8217;ve been growing for nine years), a Bob Marley-esqe moustache and a nickname based on the music legend&#8217;s son, the local musician does a set of well-known reggae cover tunes sprinkled with the occasional original.

His next concert at the Brewery Tap will take place sometime in late June or early July, he said.

In addition to Ziggy and sports, the Brewery Tap also occasionally offers a karaoke or quiz night. There&#8217;s a dart board, a small snooker table, the requisite gaming machine in the corner and a jukebox that places a diverstiy of artists such as Stevie Wonder, Nickleback, Neil Diamond and Guns N&#8217; Roses next to each other.

Once summer arrives in full force, the back beer garden will open, Napier said.

For d&#233;cor, the eye-catchers are minimal in the Brewery Tap, consisting mainly of pieces of pottery, some mounted smoking pipes, a portrait of football legend George Best in his prime and various other odd bits (such as a pith helmet). Quaint, in some ways, but not particularly unique for a small English haunt.

All in all, it&#8217;s a local&#8217;s pub that draws a fair amount of business from the nearby American housing area and employs a couple of bartenders from the U.S. community, Napier said. The menu, limited as it may be from the bar&#8217;s small kitchen, plays to the audience &#8212; burgers and fries are a staple, he said.

The mood is quiet and close, where most patrons seem to know each other and call the bartenders by their first names.

Not quite &#8220;Cheers,&#8221; but homey enough for a brew within spitting distance of home for nearby Americans.

Location: 19 Denny End Road, Waterbeach, north of Cambridge on the A10.

Food: A limited menu of savory basics such as hamburgers and fries but no plated meals, plus the standard assortment of crisps.

Ambience: A locals&#8217; haunt, with people who generally know each other clustered in tight groups over their pints or arrayed in front of the big screen. Smoking is allowed but not at the bar.

Service: Courteous and prompt, and the Guinness is poured with particular care.