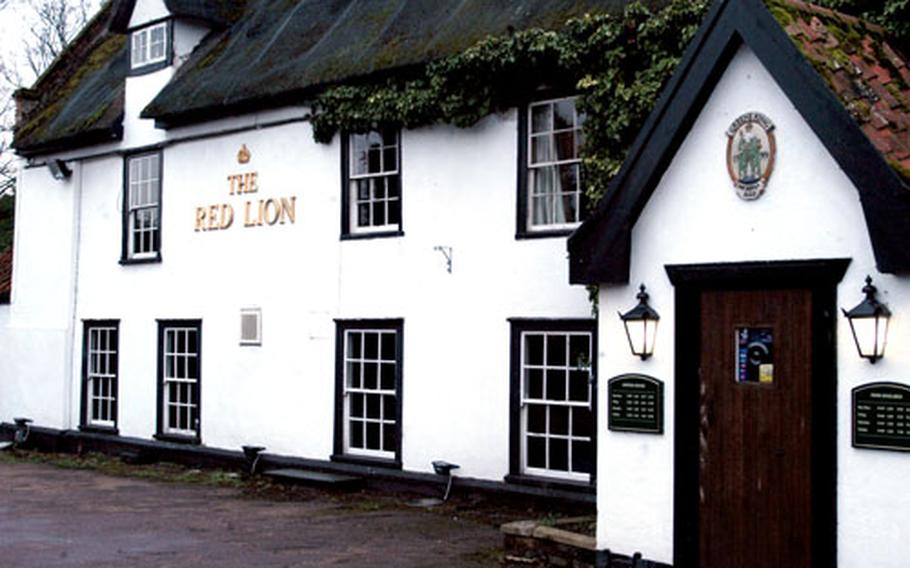 But upon a closer look, there&#8217;s more to this quaint village on the B1112 between Mildenhall and Bury St. Edmunds than a run-of-the-mill cow field/speed camera haven.

The settlement is rare in that it has two churches, both the Church of England. The one with the thatched roof, however, sits empty and is tended to by a historic trust.

There&#8217;s also the legend of a headless horseman. A decapitated bishop, to be exact. Locals swear to hearing the horse&#8217;s footsteps near the Temple Bridge.

Where does one pick up such local flavor? At The Red Lion pub, square in the center of the village.

Situated on a 13th-century site where men would gather to water their horses on the Hark River and housed in a 1570 structure, The Red Lion is considered young at 100 years old, owner Liz Handford said.

In truth, The Red Lion is more pork chops and potatoes than smoky pints.

The oversized parking lot and lack of overbearing loud music give way to an establishment that, yes, serves Greene King and a host of local brews, but overall strives to set a more refined tone with mood lighting and specialty mustard dressing.

The d&#233;cor is early 20th-century hunter: Stuffed foxes feign to prowl on a coffee table and a deer head is hung proudly from the wall between the bar and the fireplace.

But the atmosphere is not charged with safari bravado. Businessmen gather for lunch with wine while friends gather on the couches near the fire at night for a pint or two.

The menu changes daily, following the trend of what&#8217;s freshest. Outside of the shrimp &#8212; prawns to Brits &#8212; nothing is frozen. All the produce and game are local.

The menu reads from regional &#8212; Norfolk chicken breast with a fresh sage and onion stuffing and whole grain mustard sauce &#8212; to saucy &#8212; medallions of pork tenderloin with a cheese-and-cracked-black-peppercorn sauce for the same price &#8212; to just plain outlandish &#8212; wild boar steak with a red onion and tarragon.

Unlike so many pubs across Britain, The Red Lion is kid-friendly.

The Red Lion also has a meeting room for functions.

Location: Heading toward Bury St. Edmunds from the Five Points Roundabout, it&#8217;s on the right side of the road in the first of several villages, Icklingham.

Drink: It&#8217;s more of a restaurant than a pub, but The Red Lion does have a handful of local brews and wine.

Ambience: Low ceiling reflects even lower lighting. A fireplace and stuffed animals. And the crystal shines.