Bar Sleuth: Irish music is the pearl of the Earl 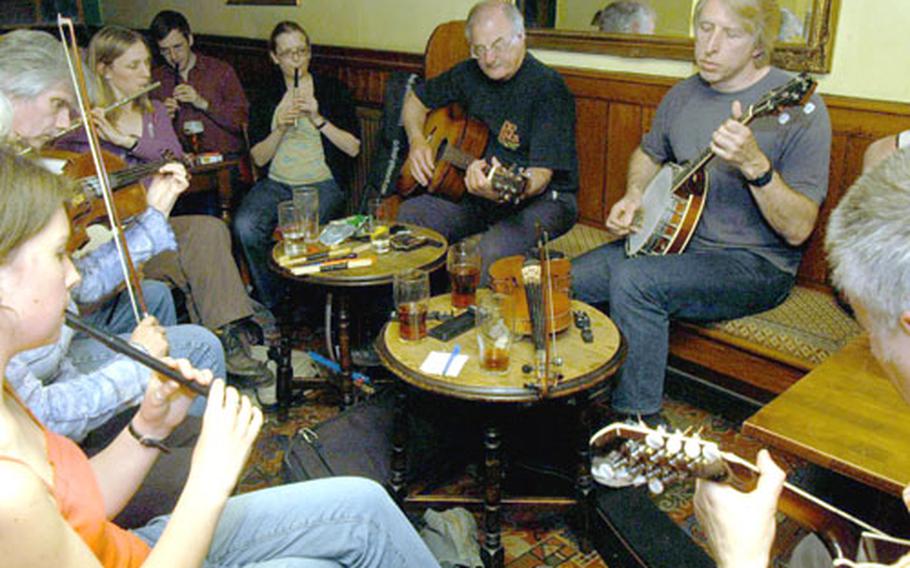 A Monday night fixture at the Earl of Beaconsfield in Cambridge is an ensemble who gathers to play Irish music. The musicians often swap instruments around the circle, including the mandolin, banjo, guitar, flute, whistle, violin, harmonica, drums, accordion and, occasionally, a cornet. (Ben Murray / S&S)

A Monday night fixture at the Earl of Beaconsfield in Cambridge is an ensemble who gathers to play Irish music. The musicians often swap instruments around the circle, including the mandolin, banjo, guitar, flute, whistle, violin, harmonica, drums, accordion and, occasionally, a cornet. (Ben Murray / S&S) 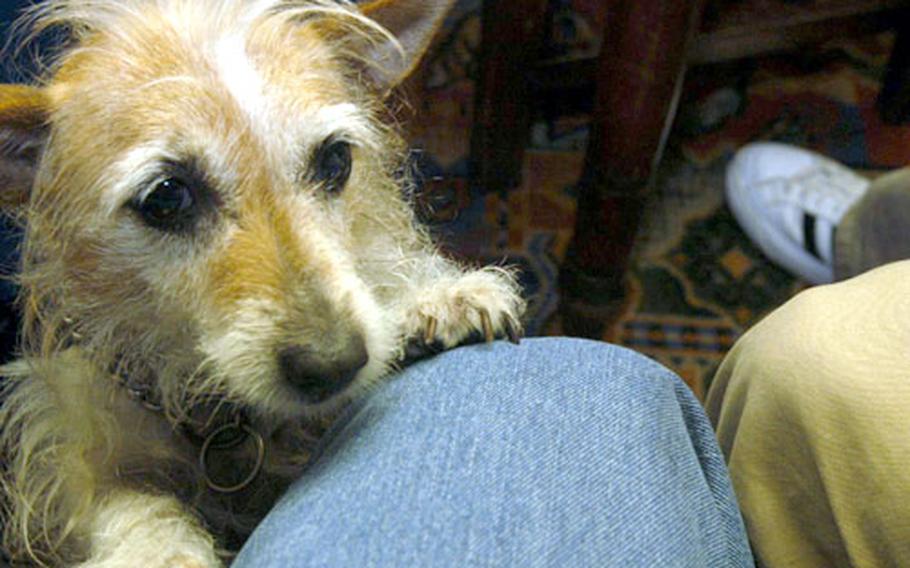 Rosie, the ubiquitous pet of the Irish music sessions at the Earl of Beaconsfield, spends Monday nights criss-crossing between the legs of the players. (Ben Murray / S&S)

CAMBRIDGE &#8212; It can be hard to find a good excuse to go for a drink on a Monday night.

But step into the Earl of Beaconsfield pub in Cambridge after 8:30 p.m. on a Monday and the reward for your efforts hits you right in the ear. Trilling at the back of the pub is the rich and lively sound of well-played Irish music, courtesy of a group of local aficionados who gather every week.

It&#8217;s a loose group, sometimes including only three or four, sometimes burgeoning to 10 or so, but the quality of the players is so consistently high and the musicians so versatile that it&#8217;s usually worth the visit.

Depending on the night, there&#8217;s normally a guitar, a violin, a flute, a banjo, a mandolin and some whistles and drums in the mix, and occasionally an accordion or harmonica.

One person will just start piping or playing a tune, and others will gradually jump in, steadily building the depth of the music, and the players are good enough to often trade instruments between selections.

It&#8217;s a fitting backdrop for the atmosphere of the Earl, named for former Prime Minister Benjamin Disraeli, who held the title of Earl of Beaconsfield. It&#8217;s full of shadows and flickering candles, with stacks of books and framed pictures as decoration. Semi-professional drinkers hover in twos and threes around the corners, while livelier groups of locals often take over the larger tables for pints and conversation in the back.

It&#8217;s meant to have an Irish lilt, according to the manager, and it succeeds in ways others don&#8217;t, mainly by not trying too hard for the effect.

Simplicity, in fact &#8212; from the worn wooden furniture to the beer selection &#8212; is the order of the day at the pub. There&#8217;s little other than a standard selection of lagers, Guinness and a pair of Adnams ales, and the Earl doesn&#8217;t serve food, though a Friday night barbecue in the beer garden started its summer run last week.

Even the video game console is pleasingly classic &#8212; straight out of the 1980s and featuring Pac Man, Donkey Kong and Space Invaders.

For entertainment, sports are frequently on the small TVs hanging in the corners, the manager said, and continuing with the Irish theme, Gaelic football will be a summer staple. On Thursdays they sponsor a quiz night starting around 8:30 p.m., with rotating quiz masters from around Cambridge.

Pubs full of Friday night drinkers can tend to seem similar, and not all can stand up to scrutiny on a weeknight.

But with Irish music and candlelight, and a particularly relaxed atmosphere, the Earl of Beaconsfield can be a reason to head in to work late on Tuesday morning.

Location: 133 Mill Road, Cambridge, adjacent to the bridge over the tracks.

Drinks: Stella, Guinness, Carling (and Carling Cold), Strongbow, among others, plus Adnams ales and wine and spirits.

Food: Eat before you arrive; none is served here.

Ambience: Low-lit and homey, with an Irish bent and quiet atmosphere.

Service: Just the one small bar, but, at least on Mondays, waiting is never a problem.