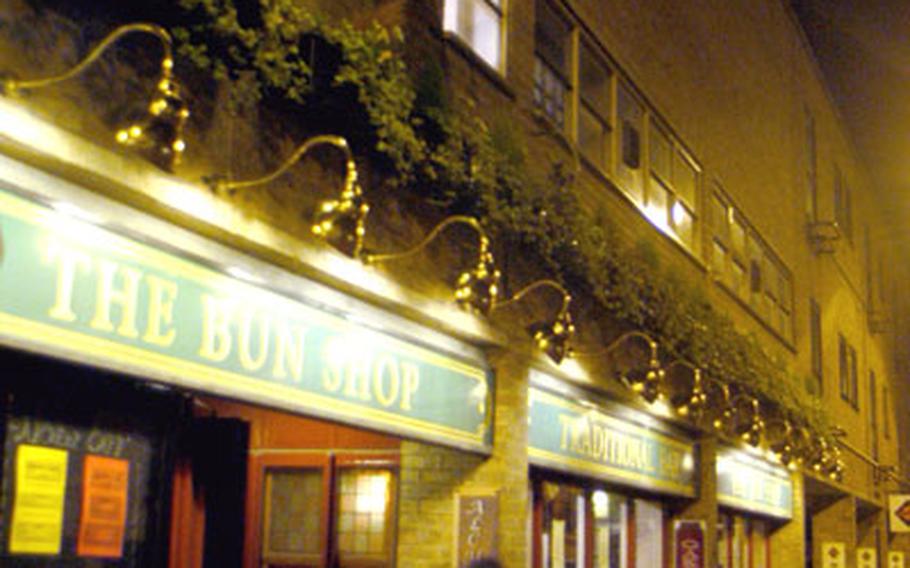 CAMBRIDGE &#8212; With the soft strum of an acoustic guitar and a mellow voice, John Meed performed original songs for a small crowd in the loft of The Bun Shop.

Sipping on their pints of beer, patrons listened attentively to Meed as he sang using a storytelling approach. On this recent night, three performances followed Meed&#8217;s as part of a showcase of local musicians at the loft, appropriately named Acoustic Caf&#233;.

Downstairs from the music in The Bun Shop&#8217;s wine bar, two groups were commenting on the taste of wine and food. Both groups were taking part in a tasting held by a local wine merchant.

Keith Gehlert, manager of The Bun Shop, mingled with the groups and explained each dish that he served and answered any questions.

Originally from Detroit, Gehlert raced back and forth keeping the groups inside the wine bar satisfied. He plans on holding similar tasting events every Wednesday night in the near future, he said.

Across the way in another room, bartenders served thirsty pubgoers at the shop&#8217;s traditional bar. Plenty of tables were available throughout the bar, which even had a punting boat, commonly seen floating along the River Cam, hung upside down from its ceiling.

In a room upstairs, opposite the Acoustic Caf&#233;, there is a projection screen where Gehlert plans to show independent films for a special event to come.

Since Gehlert came to The Bun Shop about eight months ago, he has been creating a one-stop entertainment venue comprised of a restaurant, a community center and a pub.

The Bun Shop has a wide selection of food. Guests can order herbed olives, soup, chips or white bean hummus, among other items, from the starts and snacks section of the menu.

Further down the menu, there are specialty salads, sandwiches, wraps, pastas and a good selection of burgers ranging from a fiery smokehouse to a Mediterranean. Burgers are about 5 pounds each. There are classic items, as well, such as sausages, lasagna and chili.

If they&#8217;re in a sharing mood, groups can order the chef&#8217;s tapas special consisting of snack-sized selections from around the world. This is available to parties of eight or more and costs 12.50 pounds per person.

Besides having a standard selection of beer and spirits, The Bun Shop has a long wine list to help wash down whatever you decide to order.

Location: The Bun Shop is on King Street between Sidney Sussex, Jesus and Christ&#8217;s colleges in Cambridge&#8217;s city center.

Food: The shop has a wide selection of snacks, pub grub and entrees.

Drinks: There is a long wine list and a standard selection of beer and spirits.

Ambience: The Bun Shop hosts live music, wine and food tasting events, and in the near future will be showing independent films on its projection screen.