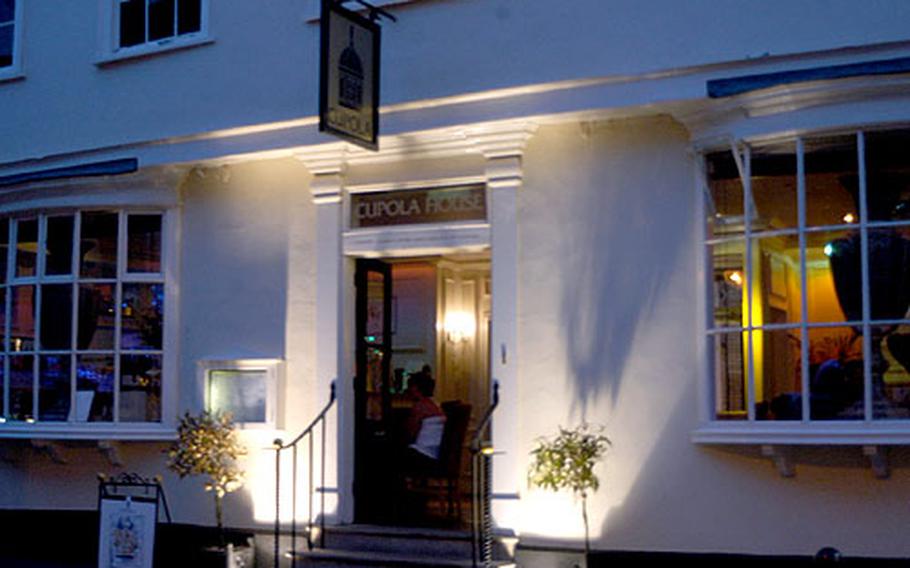 BURY ST. EDMUNDS &#8212; This quaint town in the heart of Suffolk is home to more than one architectural gem. But few buildings can rival the Cupola House when it comes to combining aesthetics and refreshment.

A stone&#8217;s throw from the town square and South African War Memorial and sandwiched between Charles Mansfield China shop and Jesseps camera and electronic shop, the Cupola House offers the refined reveler a place to sip chardonnay or dip into a menu full of delicacies.

The building is considered part of the region&#8217;s late Stuart architectural era but has had a varied, and often sordid, history. Originally constructed in 1693 as a home, the Cupola House survived a series of reincarnations before it became a pub.

According to Andrew Ritzema, an assistant manager at the now-swank establishment, the pub had a less than desirable reputation.

Now, with its eye focused on sophistication, the Cupola House has become a model business.

Just in case the bar has any supernatural troubles, there is a mummified cat in the attic floorboards, similar to one in The Nutshell, Britain&#8217;s smallest pub and Cupola&#8217;s neighbor.

Both establishments claim the petrified feline is a talisman against evil spirits.

It must be working: During a visit to the bar and restaurant there was no paranormal weirdness. There was, however, the air of cool and an outrageous female-to-male ratio, bordering on 4-to-1.

If that is not reason enough for a single airman to stop in for a drink, this might be: Cupola House is the only bar in Bury St. Edmunds that has Budweiser on tap.

With splendid architecture, an abundance of women and cold American brew on tap, the Cupola House has a solid recipe for success.

Location: The Traverse, Bury St. Edmunds. About 100 yards from the town square.

Drinks: Eight beers on tap, including American Budweiser, as well as wine and champagne.

Food: A full menu that stretches from sandwiches to full-course meals.

Service: Never waited more than a few minutes for a refill. Always a good thing.