Bar Sleuth: Be one of Pepys' peeps 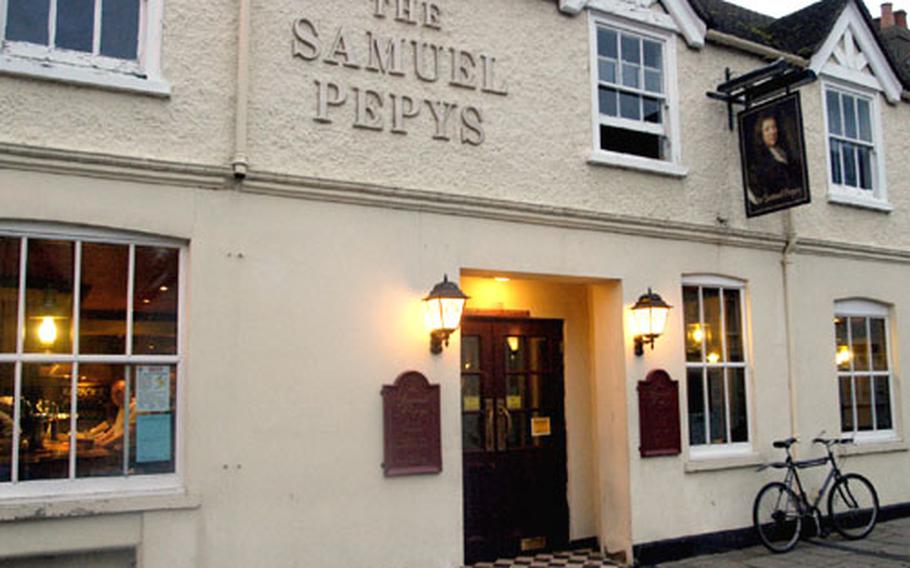 HUNTINGDON &#8212; Oliver Cromwell may have gotten all the glory in his hometown, but Samuel Pepys got one heck of a namesake pub.

The Samuel Pepys (pronounced &#8220;Peeps&#8221;), on the far eastern end of High Street, is the kind of place that makes an afternoon pass with relative ease, whether one is watching rugby on TV, telling stories about why the British army is more worthy of praise than the Royal Air Force, or just sitting back with a couple of pints and reading the day&#8217;s newspapers.

Pepys is most famous for his exhaustive diaries, which are considered one of the most important sources of information on the English Restoration period. He also was an English naval administrator and member of Parliament.

Although Pepys is lesser-known than other figures in English history &#8212; such as Cromwell, who overthrew Charles I &#8212; his namesake pub, which opened nearly 300 years after his death, seemed like a fun and fitting tribute.

Even before entering, just seeing an unlocked bicycle propped against the outside wall seemed to hint &#8220;comfortable neighborhood pub.&#8221;

Inside, that first impression was confirmed with a large, sturdy bar and eye-pleasing d&#233;cor. The volume on the two TVs had been muted and music played just loud enough to be heard, but not enough to cause a distraction to either conversation or the reading of Sunday newspapers.

Pouring pints behind the bar was owner Stephen Hampton.

For a while it was an Irish pub, Hampton said, and before that it was called The Waterloo.

But for the past five years it&#8217;s been The Samuel Pepys.

Pubgoers one recent day included four middle-aged men bellied up at the bar, two men in their late 20s or early 30s reading newspapers at one of the tables and a couple who looked to be in their young 20s.

Other couples and single patrons wandered in and out at regular intervals.

For now, Samuel Pepys serves food only at lunch on weekdays. So, visitors out on an evening of dinner and drinks will have to dine elsewhere.

Hampton said he has applied for an extended license to stay open until midnight on Thursdays.

Karaoke may not draw the best singers, but it does draw servicemembers.

Huntingdon is about 20 minutes south of RAF Alconbury and the same distance east of RAF Molesworth.

Drinks: About a dozen beers on tap, including four traditional ales, and standard international beers.

Food: Traditional pub food, and hamburgers, for weekday lunch only.

Ambiance: Comfortable and relaxing. The room was broken up by large columns that seemed to give the pub a feel of having a handful of little alcoves.