Bar Sleuth: At the Blues Cafe Bar, there's music on tap, too 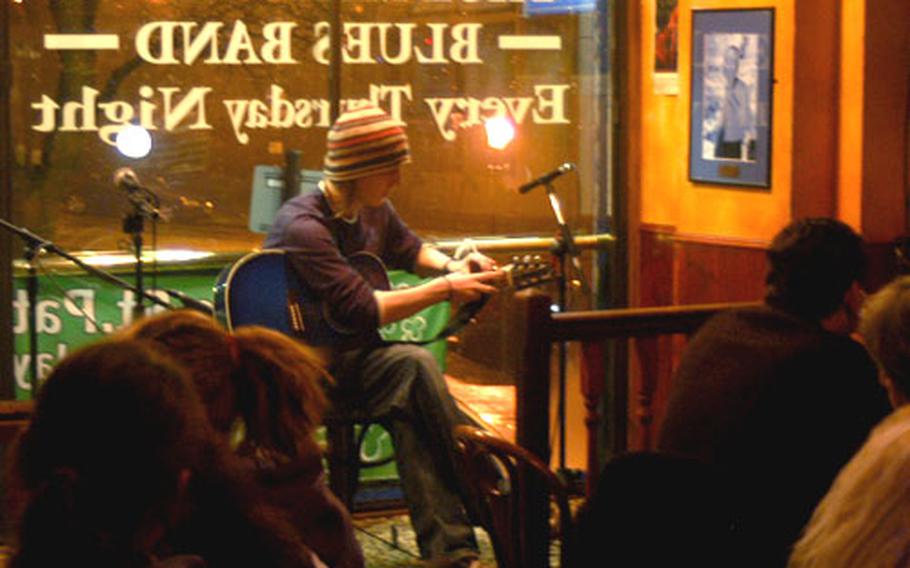 Guitarist Mark Boyle plucks and hammers the strings on the neck of his guitar in a unique picking style that allowed him to also drum on the body of the instrument, creating a strangely melodic sound at the Blues Cafe Bar&#39;s open mic night in Harrogate recently. (Ben Murray / S&S)

Onstage, a pair of teenage boys in baggy pants bumped fists and exchanged smiles after an undeniably impressive four- minute rhythm session in which they covered vast amounts of techno terrain, sometimes at almost bat-like frequencies and beat rates.

&#8220;Those guys are here every week,&#8221; said a girl named Elena, a congenial twentysomething woman rolling her own cigarettes near the bar.

It&#8217;s Tuesday night at the Blues Cafe Bar in downtown Harrogate, a lively locals bar on the edge of the shopping district in the small northern city, and Elena&#8217;s assessment of the beat-box team&#8217;s talent as &#8220;good&#8221; is an understatement.

In fact, with its d&#233;cor of broken drumsticks and imploded guitars, its talk- to-anyone atmosphere and penchant for live music, almost everything in the Blues Cafe Bar is an invigorating change of pace from the traditional smoke-soaked and pie-serving pub.

Featuring live blues bands on Thursdays and Saturdays and an impressive lineup of regulars at the Tuesday night open mic, it&#8217;s the kind of place that can make the entertainment-starved masses want to look skyward and say to the heavens, &#8220;Thank you for the hippies.&#8221;

&#8220;Thank you for the indie songwriters with too many bracelets and the dreadlock-wearing guy on the djembe drum, whose shirt is made of either wool or hemp; it&#8217;s hard to tell.

&#8220;Thank you for the heavy guy in the leather jacket with better vocal and piano-playing talent than Van Morrison, but without the creepy hat.

&#8220;Thank you for ponytails and beaded necklaces and tins of tobacco and excessive facial jewelry.

&#8220;Thank you for three-part harmonies and vocal chords scorched by thousands of cigarettes.&#8221;

They are all on display in the Blues Cafe Bar, and they combine to make for one of the most refreshing watering holes in short reach of a U.S. base.

From first glance, it&#8217;s a place that offers something different from the Kings Arms or Queens Knees on street corners all over England. Pictures of famous blues guitarists hang reverently on the walls, and a painted caricature of Jimi Hendrix wails over a burning guitar. A signpost dangling from the ceiling points in two directions: Betty&#8217;s Bun Shop (a famous Harrogate tea shop) and Perdition (a mythic pit of eternal damnation).

At the bar, the Blues Cafe Bar goes for a short list of ales and lagers, with Guinness and Budweiser on the side. As bonus, it has its own ale named after it, but it&#8217;s a feature that provides one of the only less-than-noteworthy experiences of the place.

If you&#8217;re hungry, there&#8217;s a lunch-style menu during the day, and a bona fide Egyptian restaurant upstairs called The Blue Nile.

But a bar is often just a bar, no matter how many wheelbarrows it has hanging from the roof, unless the two-fisted combo of the music and the crowd make it shine. At the Blues Bar Cafe in Harrogate, if the right one don&#8217;t get you, the left one will.

Food: Lunch menu at the bar during the day, with a short list of standards. But the menu erupts upstairs at The Blue Nile, which offers Egyptian dishes from Bedouin lamb chops to something called Dauoush Basha (Egyptian marinated meatballs).