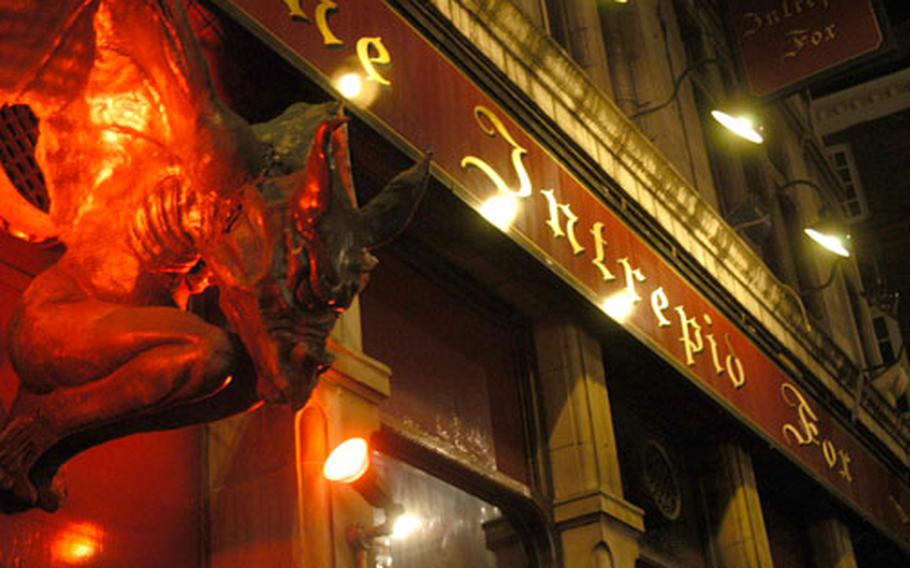 Herald of the goth-rock horrors that await on the inside, the red demon of The Intrepid Fox glowers down over the front door of the London bar. (Ben Murray / S&S)

LONDON &#8212; Standing at the bar in The Intrepid Fox, you get the feeling that, at some point, Satan had just had enough.

Faced with a plague of twee, cozy little hometown pubs overrunning England, Lucifer must have just hauled himself out of an iron manhole and set about trying to balance out the bar scene a little.

If so, he likely began by planting his banner directly in the center of The Intrepid Fox, a bizarrely attractive watering hole in the dark heart of London.

At the crossroads of Chinatown and the sex shops of Soho, the Fox is situated several blocks off the posh West End theater district in an area where freshly killed chickens and half-naked women are on display just yards away from each other.

Walking in under the glare of a garish, winged gargoyle that hovers over the front door, the signs that you are not at Ye Old Wagon and Horses are immediate. Everything &#8212; everything &#8212; that is not covered by a stained and ragged poster for a heavy metal band or popular anarchist is painted in black. The only lighting in the establishment comes in dim reds and greens, with flares of orange at the bar and splashes of neon from outside.

In one corner sits a mock graveyard, bulging with members of the undead in various stages of the effort to wrest themselves from interment.

Across the room, several seats in the fishbowl window in the corner can be accessed only by brushing the legs of a disjointed, life-sized witch, made completely of metal, who has been crucified on a 6-foot wooden cross. It&#8217;s awesome.

Interspersed among the limited tables are patrons wearing the garb you might expect of a regular here &#8212; deep eye shadow, tattoos, a strapless leather bustier. Half of the place is bathed in light from a sign across the street that reads &#8220;Lovely Sexy Girls.&#8221;

Approaching the bar for a drink, it&#8217;s hard to find a place to put your elbows because most of the surface is a mess of dirty glasses, cigarette butts and forgotten pools of beer.

Behind the faux carnage is a tall, heavy man in a sleeveless Suicidal Tendencies concert T-shirt, his livid purple mohawk threatening to tickle his middle lumbars. He&#8217;s got more piercings than facial features and he&#8217;s slow at the taps, but he ingratiates himself to the customers with jokes about how abysmally bad the service tends to be.

Shaped in an &#8220;L&#8221; formation and fitted with a tiny, sinister little smoke-shrouded room at one corner, The Intrepid Fox is a blessed change from the warm-your-cockles atmosphere of many pubs in England.

Dark, dank, cursed with a set of bathrooms so unholy they repel cockroaches, it&#8217;s a wonderful place to get a whiskey and a beer and an earful of metal.

Drinks: Many English standards, plus JB Smiths. As with some London bars, there is also a deal to make your drink a double for just 1 pound extra when ordering a mixed drink.

Food: None. And you wouldn&#8217;t want to eat here anyway. Seriously.

Ambiance: Freaky-meets-friendly. Dark and dirty, grim but campy, it has a d&#233;cor designed to feel creepy &#8212; the place has more skulls and bones than a Yale reunion. And if you&#8217;re put off by an authentic vampire-in-bondage outfit, keep walking.