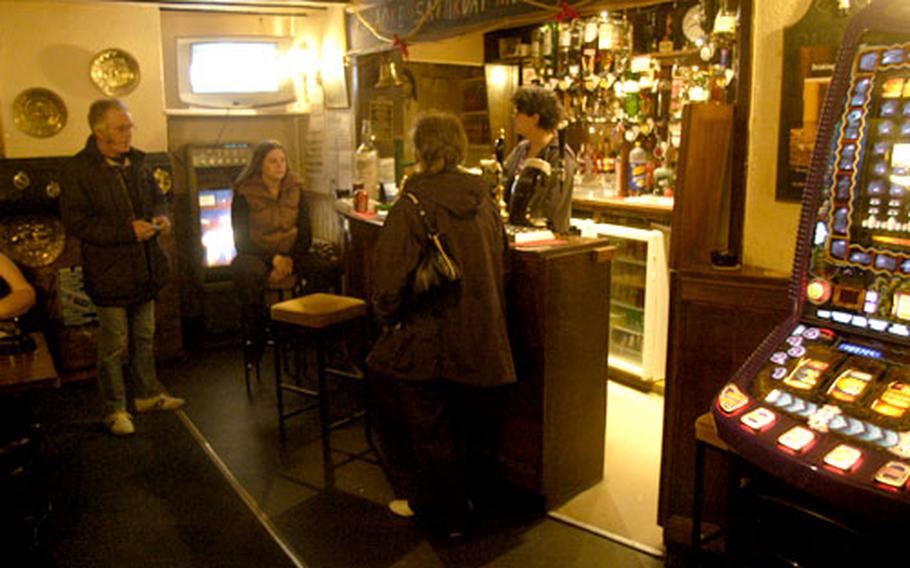 The White Horse is a small-town pub just outside of a large-scale air base.

It&#8217;s the kind of place where under-18s, who are not served alcohol, can shoot pool or throw darts before 9 p.m.

It&#8217;s the kind of place that has become a miniature community center of activity, with a pool league on Tuesdays, cribbage league taking place in the back bar on Wednesdays, karaoke on Fridays and Saturdays, and trivia night on Sundays.

It&#8217;s the kind of place where, if owner Patsy Grady doesn&#8217;t know you, explained American West Row resident Dana Lyga, she soon will.

And, said Lyga, whose Air Force husband works at Mildenhall, Grady will make sure that she&#8217;s got a birthday card handy for those advancing a year.

It&#8217;s also the kind of place where that friendly familiarity means the patrons don&#8217;t cause trouble.

The White Horse&#8217;s building has been around for about 350 years, at times having served as a coach house and mortuary before its current incarnation as a bar. It&#8217;s the oldest of the two pubs in West Row, a village that at one time, according to patrons, had five pubs.

With 3&#189; centuries of history, it&#8217;s not surprising that there are a few ghosts roaming the White Horse. One of them is the bar patron who mainly stands at the back bar. Lyga, who works part time at the White Horse, has seen him on many occasions, standing or walking around the back room.

Three more live upstairs &#8212; two cavaliers, the nicknames for those who supported King Charles I during the 1642-1646 English Civil War, and the ghost of a woman, according to Grady.

Grady, who hails from Liverpool, has owned the pub for two years.

With six beers on tap, including Greene King&#8217;s IPA, and plenty of mixers for cocktails and prebottled alcoholic drinks, there&#8217;s bound to be something to drink for everyone.

And for the mother and daughter who came in after a driving lesson, a couple of canned soft drinks fit the bill.

Drinks are the only thing on the menu, though, as the White Horse doesn&#8217;t serve food. Grady will, however, whip up something for the cribbage players and during special events, such as base going-away parties that have been held at the pub.

Spending time between tending bar and watching TV at a table in front of the fire, Lyga said that when they arrived in England last November, they visited a handful of pubs, but none stood out like the White Horse.

Bar patrons, noticing they hadn&#8217;t been in before, asked who they were and if they were new to the village, Lyga said.

That introduction was really nice, she said, and they&#8217;ve been going to the White Horse ever since.

Food: No food, although owner Patsy Grady will provide food for special events.

Ambiance: Quiet and comfortable on a Wednesday evening. A little smoky as the place filled up with cribbage league members.

Service: Good and friendly. The close-knit relationship between staff and patrons means that if you&#8217;re thinking of ordering your regular drink, the bartender probably already knows what you want.