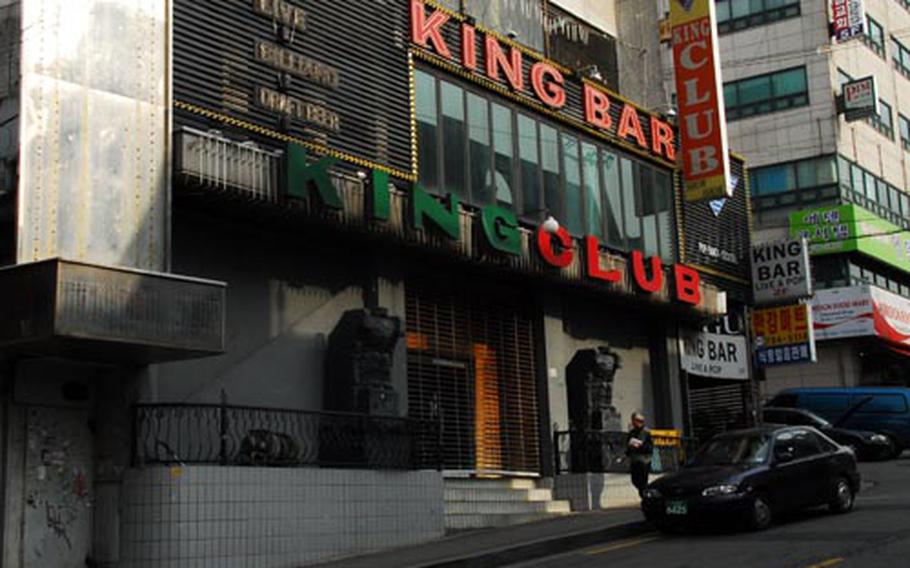 A U.S. soldier was stabbed outside the King Club in Itaewon on Feb. 1. U.S. officials are still investigating the incident, but the owner of the club says gang violence may have been involved. She and other bar owners say a shorter curfew isn’t contributing to more violence in Itaewon, although military officials say the number of discipline problems has increased since the curfew was changed last summer. (Ashley Rowland / S&S)

SEOUL &#8212; When a U.S. soldier was stabbed outside the door of her dance club in early February, Oh Hee-ja blamed it on an overcrowded bar.

What she didn&#8217;t blame was a more relaxed, two-hour curfew that U.S. Forces Korea says has accompanied an increase in off-post violence since it was put into place last summer.

When USFK commander Gen. Walter Sharp set a shorter 3-5 a.m. curfew in August, he said troops were responsible enough to stay out later without getting into trouble. But earlier this month, he said there had been a steady rise in off-post violence since the new curfew began.

But several bar owners said the curfew hadn&#8217;t caused a spike in crimes, or in business. Many, like Oh, who owns the King Club, said they don&#8217;t think there should be any curfew.

"These troubles always happen at any places where lots of people are gathered," she said. "It doesn&#8217;t have anything specifically to do with the curfew."

USFK will not release information about the number of discipline problems reported since the curfew change, or where and when they happened. But USFK officials have said the number of off-post incidents has increased steadily since last August, after dipping slightly in the first month after the curfew was put in place.

Over the same period, the number of on-post discipline problems decreased slightly, they said.

Bar owners said forcing troops to be home by a certain time creates more problems than it solves.

South of Seoul in Pyeongtaek, a city near Osan Air Base and Camp Humphreys, bar owner Yi Hun-hi said U.S. servicemembers are better behaved than in previous years and don&#8217;t need the curfew, which he called "the stupidest thing." The more restrictions, the more likely they are to misbehave. he contended.

"The servicemembers are not stupid," said Yi, president of the Korea Foreigner Tourist Facility Association.

Kim Sang-sook, owner of the Grand Ole Opry club, said crime seemed to decrease after the curfew was shortened. And Jung In-chul, owner of Seoul Pub, blames individuals for drunkenness and misconduct, not the U.S. military as a whole.

Since the Feb. 1 stabbing outside the King Club, on a hill next to Itaewon&#8217;s infamous red-light district, Oh said her business has dropped so much that she&#8217;s having trouble keeping the club open.

She said bouncers took two fighting soldiers outside the club that night. But they continued fighting until one stabbed the other, whom she believes was a member of a military police unit. She said one of the soldiers was in one of several military gangs, whose presence she called a "public secret."

USFK spokesman Dave Palmer said he couldn&#8217;t comment on the King Club incident because of an ongoing criminal investigation. But a flier posted at U.S. Army Garrison-Yongsan said a soldier was stabbed with a knife and assaulted by several people at the club. It offered a $1,500 reward &#8212; which expired March 19 &#8212; for tips leading to the recovery of a knife and clothes worn by the suspect, who had allegedly put them into a black plastic bag near the base.

Palmer said the soldier attacked at the club was treated at the garrison&#8217;s hospital and released.

The garrison commander met with Itaewon bar owners four days after the stabbing. Palmer said the meeting was part of an ongoing effort to "provide a safer environment for servicemembers," and wasn&#8217;t triggered by a single incident.

Kim Hyun-young, 30, said she hasn&#8217;t noticed an increase in violence since last summer.

But Lee Myung-jee, 53, has lived there for a year and said the neighborhood is noisier and more dangerous than her last home. She said Itaewon is full of what she called "unclean" expats, transgender people and toughs seemingly ready to cause trouble.

Even though she doesn&#8217;t think the neighborhood has gotten more dangerous since last summer, she still worries. Her sons, both in their 20s, talk to her about fights and cursing among expats in Itaewon.

"My sons tell me not to go out at night because it is so dangerous," she said. "Whenever I have to go out to run errands at night, I run home very fast because I am scared."