Bar codes will track use of gas coupons in Italy 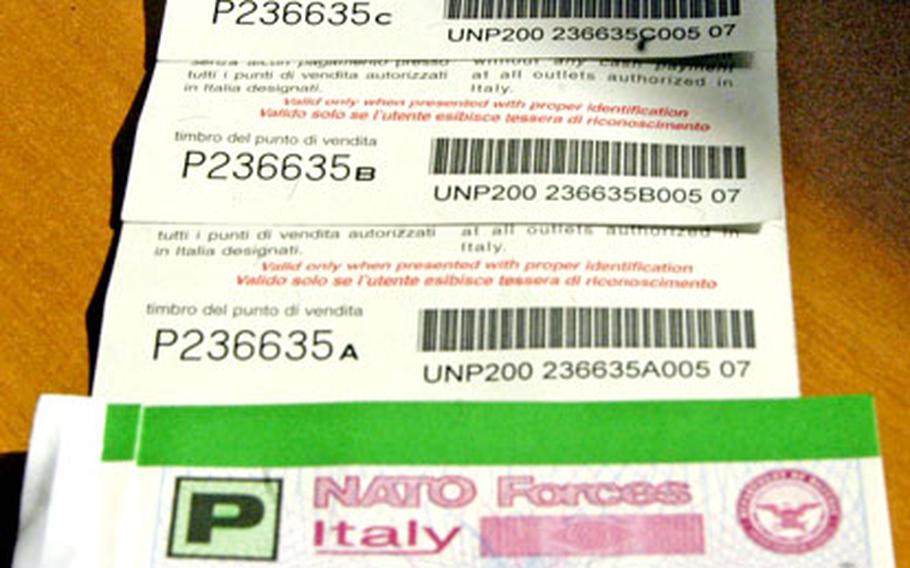 Bar codes are now being printed on the back of fuel coupons so officials can track their use better and try to crack down on fraud. (Sandra Jontz / S&S)

Bar codes are now printed on the back of the fuel coupons drivers in Italy use. The new system will keep better track of who, where and when patrons are cashing in those coupons, said Bart Di Muccio, administrator of the tax-free office, housed at the U.S. Navy Capodichino base in Naples, which runs the coupon program for U.S. and NATO commands in all of Italy.

The bar codes will help mitigate fraud, which isn&#8217;t pervasive in Italy, but happens, he said.

&#8220;We have a great relationship with the Italian government, who trusts us to properly administer the program,&#8221; Di Muccio said.

With no gas pumps on military bases in Italy, NATO military members and civilians fuel up at Agip or Esso stations on the economy. Through an agreement with Italian officials going back four decades, NATO members are exempt from paying the fuel tax, a savings of roughly 50 percent of the pump cost. Drivers use pre-paid gas coupons at the pump instead of paying attendants with cash or credit.

But some use the coupons to pay for more than gas.

Users have admitted to using the gas coupons to pay for rent, settle a bill with the car mechanic or simply sell them to supplement their income. This week, a few sailors in Naples said that while they don&#8217;t misuse the coupons, they know of others who do.

With roughly 5 million coupons exchanged for fuel each year, only a small percentage have been checked each month.

In Italy, random monthly monitoring usually flags a handful of coupon users, said Cmdr. Navy Sutton, the base supply officer and tax-free gas coupon program officer. Drivers can fail to sign, date or write their vehicle license plate number on the coupon. Or the signature doesn&#8217;t match up with the user following a scan of the serial numbers. That doesn&#8217;t necessarily mean fraud, he said.

But those users receive a letter letting them know the tax-free office spotted their possible oversight. Do it again, and suspicions are raised, he said.

With the bar code, the office is hoping to be able to sample at least 50 percent of the coupons each month.

Di Muccio cited a case in the United Kingdom in the fall of 2004, in which agents of Her Majesty&#8217;s Customs and Excise, the government arm that deals with tax and customs issues, found coupons used at a Scotland gas station &#8212; nowhere near a military installation.

Members in England also enjoy tax-free privilege, and coupons are to be used for official travel. The government cut by half the maximum number of liters drivers could buy each month, and imposed stricter monitoring of the coupon use.

In Italy, with the new fiscal year came a new batch of coupons, and officials took that opportunity to print the bar code on the reverse side of the coupons. The additional cost is less than a penny on the dollar, said Di Muccio, adding the cost will not be passed on to customers. The bar code reader, which they will buy in the coming weeks, is estimated to cost $10,000 and will come from the office&#8217;s budget.

Each month, the Naples office sets prices for fuel coupons by calculating changes in the barrel price of fuel, fluctuations in the currency exchange rate and gains or losses the Navy Exchange incurs the month before.