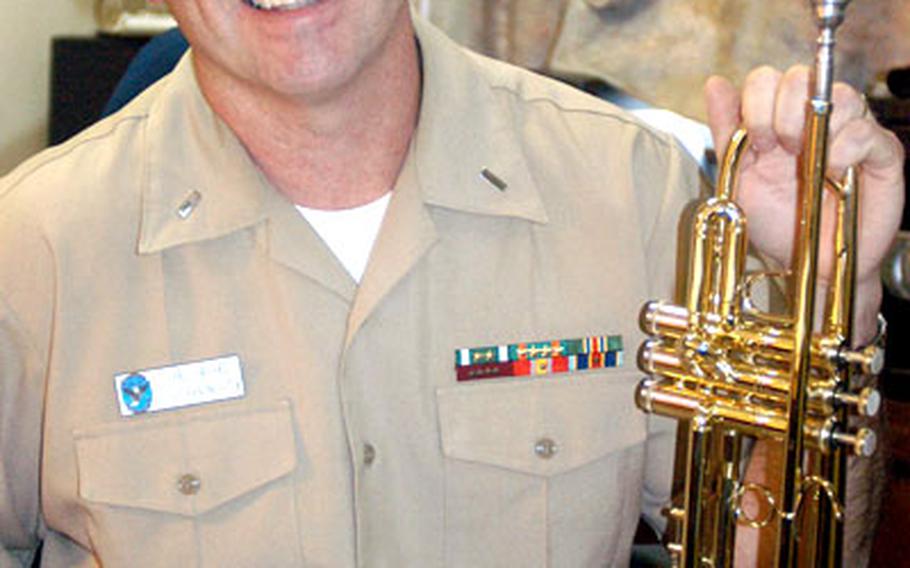 Lt. j.g. Carl Gerhard, band master for the 7th Fleet Band, has jammed on and off for years with the alternative group Phish. A trumpet player, he now conducts the fleet band in about 300 performances a year. (Juliana Gittler / S&S)

Lt. j.g. Carl Gerhard, band master for the 7th Fleet Band, has jammed on and off for years with the alternative group Phish. A trumpet player, he now conducts the fleet band in about 300 performances a year. (Juliana Gittler / S&S) 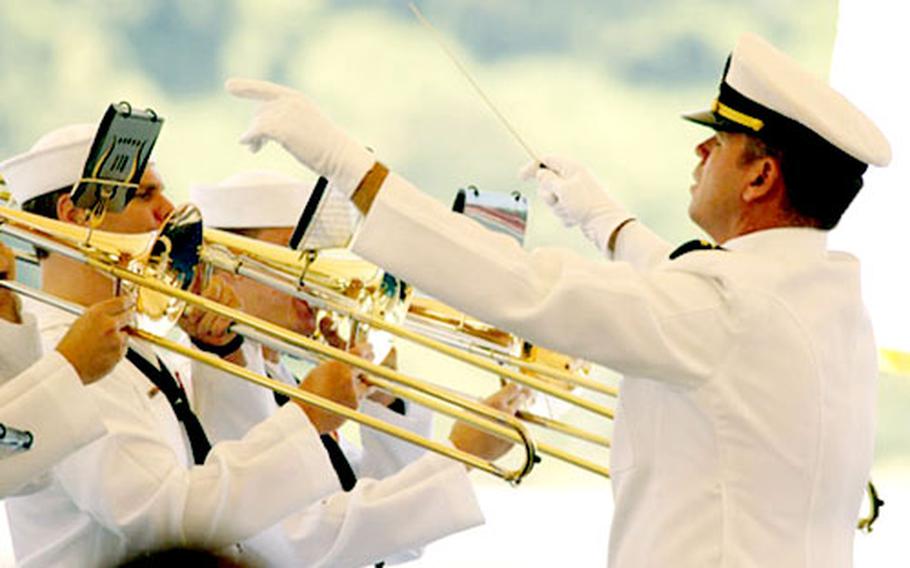 YOKOSUKA NAVAL BASE, Japan &#8212; Not too many sailors have a gold record stashed away and have been mentioned in the pages of Rolling Stone magazine.

Lt. j.g. Carl Gerhard, the leader of the 7th Fleet Band, isn&#8217;t an ordinary sailor. In nearly 20 years as a Navy musician, first enlisted and now as a limited duty officer, he has performed for dignitaries and regular folks alike all over the world.

He has sat beside Imelda Marcos at dinner and stood before thousands during performances in October in the Philippines. Since arriving at Yokosuka in July to serve as bandmaster, he&#8217;s conducted a performance with the Tokyo Symphony Orchestra and performed before throngs of Japanese music lovers.

But it was a series of live performances with a childhood friend, including several that ended up on live concert albums, that brought the trumpeter unexpected recognition.

In the late 1980s, while with the Navy Band in Newport, R.I., Gerhard jammed with an old friend, Page McConnell, and his up-and-coming band called Phish.

In 1991, Gerhard traveled to Vermont and performed with the group under an alias. The performance went so well, guitarist Trey Anastasio invited Gerhard to come back for a tour, which was scheduled around Gerhard&#8217;s summer leave.

With two other horn players, they created the Giant Country Horns &#8212; named for a Vermont Dairy. The horn section joined Phish on 14 shows that summer.

As he moved around to different duty stations, Gerhard continued to join Phish for gigs, including in San Francisco with the Dave Matthews Band and another at the Roman Colosseum while he was serving in Naples, Italy.

During his times with the band, Navy life never was far off. He led band members on physical training exercises, and said putting the uniform back on at a band tour&#8217;s end never was difficult.

The 41-year-old began performing in elementary school. He preferred clarinet but took up the instrument all his friends were playing &#8212; the trumpet.

In 1985, after years of performing with big-band and jazz acts as a teen, he joined the Navy and quickly was accepted into the musician program.

It was a stroke of luck at the time: Gerhard didn&#8217;t know he should have auditioned and been selected before signing on the dotted line. While in boot camp, with orders to Saudi Arabia as an undesignated sailor, he was able to snag and audition and a place in the Navy&#8217;s esteemed music program, possibly saving himself from years of scraping paint.

A few years later, Gerhard made his fateful visit to Vermont.

As a bandleader, he is now one of 25 officers in the Navy&#8217;s band community, all former enlisted. He jokes that he was the only ensign with gray hair.

Reflecting on his time in the Navy, Gerhard believes he has the best job the service has to offer, performing a vital link to the community, rubbing elbows with stars and dignitaries and motivating the forces.