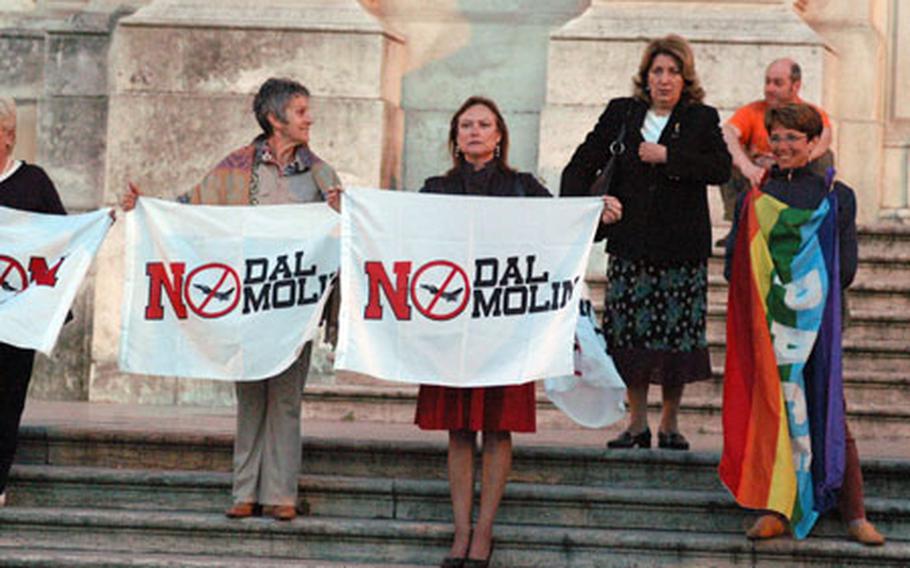 Protesters hold up signs expressing their opposition to the U.S. use of the Dal Molin airfield in Vicenza, Italy, prior to a concert Sunday by the U.S. Air Forces in Europe band. (Kent Harris / S&S)

Protesters hold up signs expressing their opposition to the U.S. use of the Dal Molin airfield in Vicenza, Italy, prior to a concert Sunday by the U.S. Air Forces in Europe band. (Kent Harris / S&S) Capt. Matthew Seifert leads 45 members of the U.S. Air Forces in Europe band during a performance Sunday night in Vicenza, Italy. A few dozen protesters, upset at the proposed American use of the Dal Molin airfield, interrupted the concert briefly, but the show went on. (Kent Harris / S&S)

VICENZA, Italy &#8212; They say music tames the savage beast. But it doesn&#8217;t appear to work as well on the not-so-savage Italian protester.

Composure, patience and the assistance of dozens of Italian police officers did the trick though Sunday night for the U.S. Air Forces in Europe band. The 45-member band shook off a brief interruption by Italians upset over the proposed American use of the Dal Molin airfield to entertain more than 500 people near the city&#8217;s most famous landmark, Monte Berico.

Organizers initially were concerned about the weather, but rain clouds stayed away. The same couldn&#8217;t be said about the protesters, though a heavy police presence did keep many of them a few hundred meters away.

Police turned cars away from the foot of the mountain, limiting access to residents and those with invitations. About two-thirds up the mountain, a long line of police watched about 100 protesters waive signs and banners, beat on drums and whistle. Another 20 meters up the walkway, a second group of police looked into people&#8217;s bags and waived over them with metal detectors. At the entrance to the Piazzale Della Vittoria, where the concert took place, a group of carabinieri officers manned another checkpoint while keeping an eye on a small group of protesters holding up signs on the steps of the famous church.

The concert began a few minutes after 9 p.m. with the band playing the Italian national anthem. The audience, largely composed of Italians, sang along. But a few dozen people sat down during the playing of the American national anthem, enduring some heckling from others in the crowd.

When the band began its first number, those who had sat down for the U.S. national anthem held up signs and moved toward the stage. Words were exchanged with others in the audience. A few carabinieri officers quickly ushered the protesters away and the band played on.

Band member Hughey Hancock, who plays the French horn, said he was a bit surprised by those approaching the stage. But he said he didn&#8217;t think it bothered anyone in the band or affected the band&#8217;s performance.

While the exiting protesters joined those already on the church steps, other people standing along the barriers took advantage of the empty seats. Those seated responded with loud applause after each number, countering the occasional noise made by the protesters on the steps. Vocalists Keisha Gwin-Goodin and Craig Bowman drew a lot of applause, as did a number of classic tunes the band played after finishing its regular set. By that time, the protesters had left the steps, vanishing into the night.