‘Band of Brothers’ unit training for its new role 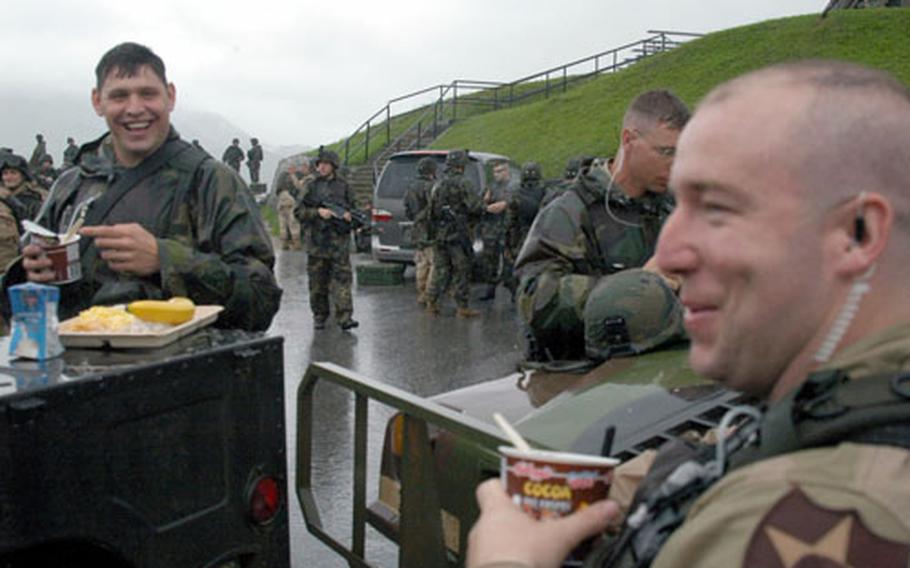 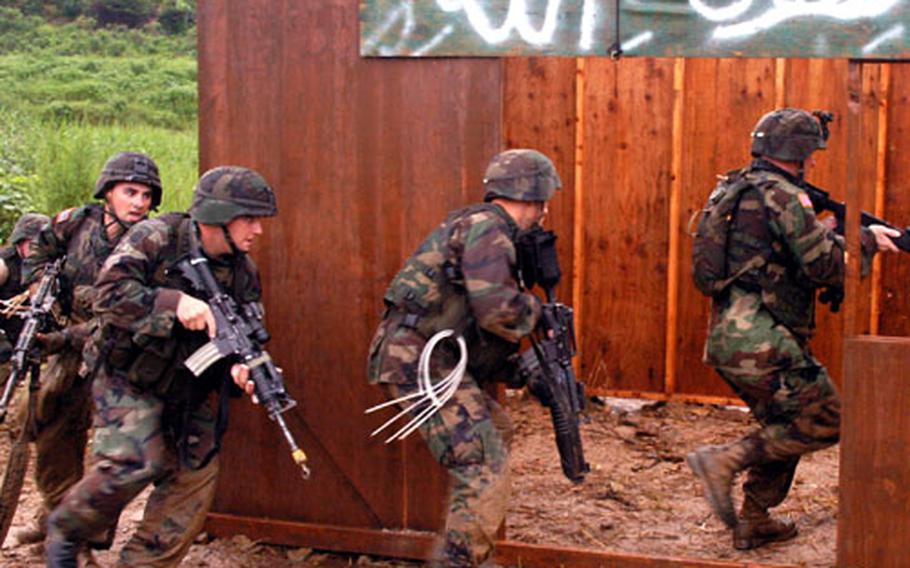 Currahees storm a building during training for their Iraq mission at Rodriguez Range. (Seth Robson / S&S)

RODRIGUEZ RANGE, South Korea &#8212; The unit featured in the book and television series &#8220;Band of Brothers&#8221; is trading parachutes for Humvees for the fight in Iraq.

The 1st Battalion, 506th Parachute Infantry Regiment, will become a motorized infantry battalion when it deploys to Iraq with the 2nd Infantry Division&#8217;s 2nd Brigade Combat Team later this summer.

The Currahees, whose exploits in Europe during World War II were featured in &#8220;Band of Brothers,&#8221; have been stationed at Camp Greaves, near South Korea&#8217;s demilitarized zone, training as light infantry since 1987.

Capt. William Jones, who leads 1-506th&#8217;s C Company, said the Currahees have been training with Humvees since they found out they were going to Iraq in May.

Company C has 22 Humvees so far and will get extra up-armored vehicles when it arrives in Iraq, he said. The Currahees have to adapt their fighting techniques to the vehicles, Jones said.

&#8220;When we first got our vehicles, every time they [Currahees] made contact with the enemy soldiers they wanted to dismount and begin maneuvering on the enemy. That is a waste of the vehicle that can go almost anywhere. We had to train them on maneuvering the vehicles to get closer to the fight,&#8221; he said.

Soldiers from Currahee units have been selected as drivers and sent for intensive training behind the wheel, which will continue once they arrive in the Middle East, he said. Vehicle maintenance also will be important once the unit starts work in the desert, he said.

&#8220;Humvees have not been made to hold armor. When you put armor on them you stress out the vehicles and you cause maintenance problems, but it is the lesser of two evils,&#8221; he said.

For the past few weeks, the Currahees have been living at a forward operating base near Rodriguez Range in Area I. The base is set up to give the soldiers a taste of what life will be like in Iraq.

One thing the Army hasn&#8217;t been able to replicate is the dry Middle East environment. At night the Currahees take shelter in tents while monsoon rains pour, sending water cascading under the tables in the dining facility.

A typical morning for the soldiers starts with a 5 a.m. wake-up and a convoy to the range to practice motorized infantry tactics. By 6 a.m., the soldiers were eating breakfast beside their vehicles in pouring rain.

Sgt. Joseph Staver of Chicago was philosophical as he munched eggs, hash browns, biscuits and gravy washed down with coffee.

Another soldier eating breakfast in the rain, Spc. Mark Hunt of Boston, has already been to the desert with the 3rd ID and is headed back for a second tour.

Another Currahee, Pfc. Wadih Fakhouri from Atlanta, has Lebanese ancestry and plans to use his Arabic language skills in the desert.

For Currahees who have been in South Korea for a while, the Iraq training is business as usual. Unit members spend almost half of their time in the field living in conditions as harsh, if not harsher, than they will face in Iraq.

Spc. Jonathan Bailey, from Syracuse, N.Y., joined Company C in June 2003 and has been in South Korea for the past year.

&#8220;The training for Iraq is not much different to what the Currahees normally do. We can all cope with it. It is not that big a leap for anyone. With all the training we have done here, we are prepared for Iraq,&#8221; he said.

Bailey, a trained sniper who carries an M-4 rifle, found out the Currahees were going to Iraq a month before he was due to go home.

&#8220;I made it clear to my chain of command that I wanted to stay. The reason I want to go to Iraq is to make sure all the people I have worked with here make it back. I am very protective of my friends and family,&#8221; he said.

The soldiers also enjoy laughing at each other after they finish a training session.