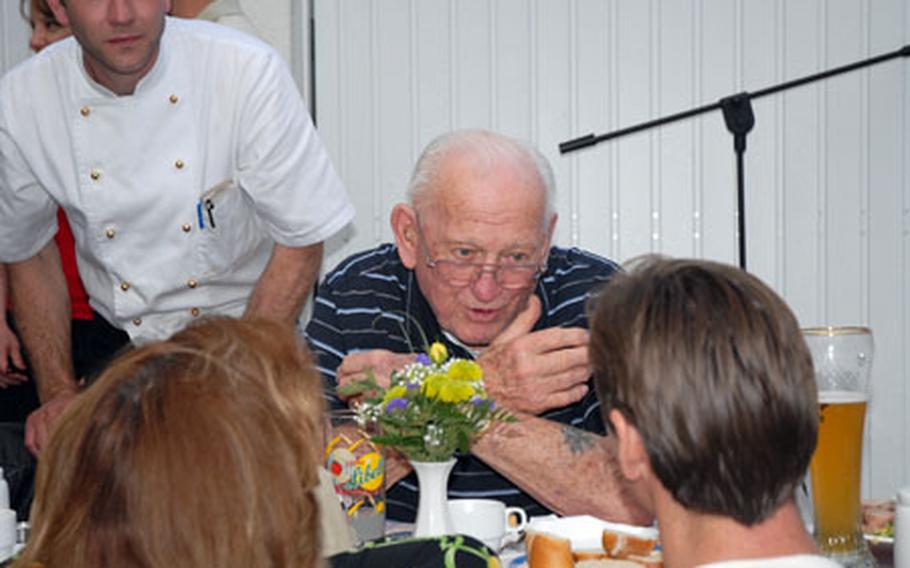 Lynn "Buck" Compton, a former lieutenant with the Easy Company, 506th Parachute Infantry Regiment "Band of Brothers" talks to soldiers and family members over dinner in Illesheim, Germany, on Tuesday. The 85-year-old former California Court of Appeals judge and five of his veteran "Brothers" were in Germany to meet and bid farewell to members of the 12th Combat Aviation Brigade, who are days away from beginning a 15-month tour in Iraq. (Mark St.Clair / S&S)

ILLESHEIM, Germany &#8212; Though many Americans might be against the war in Iraq, Lynn Compton doesn&#8217;t want to hear about it.

The 85-year-old World War II veteran and former California Court of Appeals judge was in Illesheim on Tuesday to talk to deploying soldiers and family members of the 12th Combat Aviation Brigade, who are days away from starting a 15-month rotation in Iraq.

Made famous through his membership in the Easy Company, 506th Parachute Infantry Regiment &#8220;Band of Brothers,&#8221; and the book by Stephen Ambrose and HBO miniseries of the same name, Compton doesn&#8217;t desire popularity. He uses any celebrity he has &#8220;to further the cause of duty to country and patriotism &#8212; I do that every chance I can.&#8221;

Compton was grateful for the chance to talk to soldiers of today, saying that when he was a young man, the choice wasn&#8217;t whether to serve, but which service to do it in.

One soldier who was glad to meet Compton and the five other veteran &#8220;Brothers&#8221; was Pfc. Ryan Christian, who at 22 was just 15 when the miniseries aired and remembers watching it on television.

Although Compton mentioned he thought it flattering that soldiers and families would want to hear from a bunch of &#8220;old geezers,&#8221; to men like Christian and the scores of others waiting in line for pictures or handshakes, a few words from veteran heroes was all they wanted to hear.