Ban is lifted on Top Cat Club, near Camp Humphreys 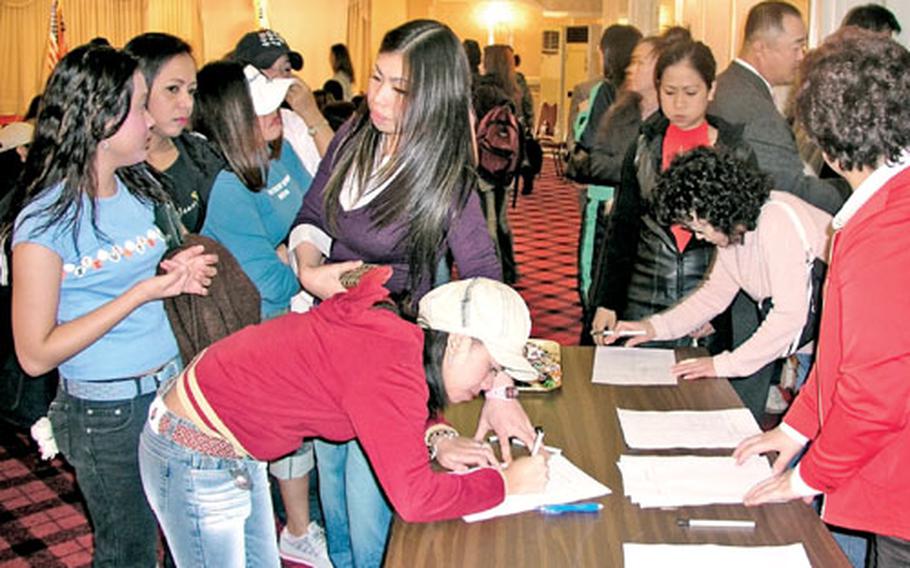 Employees from the club district outside Camp Humphreys in Pyeongtaek, South Korea, sign in at the Enterprise Hotel before a recent training session on curbing prostitution and human trafficking. The session was hosted by the Army’s Area III Support Activity at Camp Humphreys and Pyeongtaek City officials. Club owners and workers were invited. (Franklin Fisher / S&S)

PYEONGTAEK, South Korea &#8212; The commander of Camp Humphreys lifted an off-limits restriction on the Top Hat Club on Thursday after its owner pledged to keep clear of any actions that could support prostitution or human trafficking.

&#8220;Basically, she promises that she will never restrain the liberty of any foreign employees after working hours, nor would she ever force them to engage in any type of prostitution,&#8221; Slawson said.

Slawson said undercover agents of a joint crime suppression team of U.S. military and South Korean police reported that female workers at the club allegedly offered to sell the agents their &#8220;penalties.&#8221;

In the penalties system among club owners and their foreign employees, the owner chargers the foreign worker money if she doesn&#8217;t return to her residence after her work shift, &#8220;basically like a bed check,&#8221; Slawson said. &#8220;This basically is what we construe as human trafficking because the individuals do not have freedom of movement.&#8221;

Selling her penalty entails a female agreeing to go off with a customer on condition he pay her an amount that will cover the penalty she&#8217;d incur by not returning to her room.

Lee attended the Area III Armed Forces Disciplinary Control Board&#8217;s Oct. 7 session, seeking to be put back on limits. The board, Slawson said Thursday, &#8220;highly recommended&#8221; she also attend an Oct. 24 training session held by Area III and Pyeongtaek City officials on prostitution and human trafficking. The board also said she could provide them a letter stating what actions she&#8217;d take to avoid prostitution and human trafficking in her club.

Lee was among about 200 people, including club owners and their mostly Filipina staff, who attended the session at the Enterprise Hotel, just blocks from Camp Humphreys. The post and the nearby club district are in Pyeongtaek&#8217;s Anjung-ri section.

The next day Lee sent Taliento the letter outlining what corrective measures she&#8217;d take at the club, Slawson said.

Reached by phone Thursday, Lee said the lifting of the restriction was &#8220;good news&#8221; and thanked Taliento.

She said she had not been conversant with practices associated with prostitution and human trafficking and that the Oct. 24 training session had been useful.