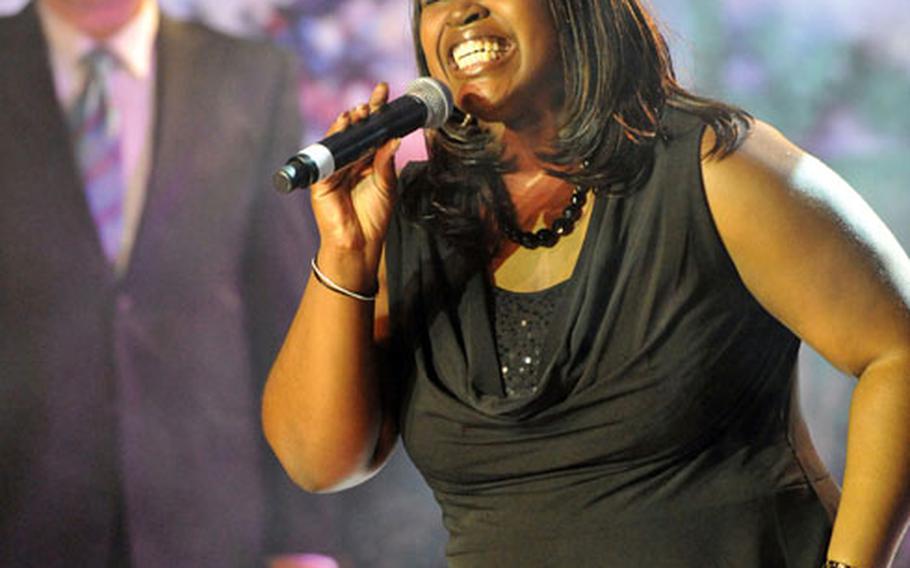 Army family member and veteran Joyce Dodson of Bamberg, Germany, sings Shania Twain’s "You’re Still The One" after winning the 2008 Operation Rising Star military singing contest Nov. 14 at Wallace Theater on Fort Belvoir, Va. Dodson, the wife of Sgt. Marquis Dodson of the 240th Quartermaster Company at Schweinfurt, Germany, served in the Army for four years and now works at the in- and out-processing center in Schweinfurt. (Tim Hipps, FMWRC Public Affairs/U.S. Army)

Joyce Dodson, 24, sang Shania Twain&#8217;s "You&#8217;re Still the One" to win a January trip to Los Angeles to record a three-song demo with DMI Music Studios, she said Wednesday while back at work in Schweinfurt, Germany.

"I&#8217;m excited about moving forward and about anything in the future that comes toward me," Dodson said of opportunities in her singing career, which now consists of volunteering with the International Gospel Church in Kitzingen, Germany.

Ecstatic about the win, Dodson, a former soldier who left active service in 2006, said she&#8217;s looking forward to vocal training that comes with the trip to L.A., as she has never received formal training.

Coming from a mainly gospel-based background, Dodson, a Danville, Va., native, still believed she had a good chance of winning Rising Star, but she said that the 11 other finalists were talented as well.

Accompanying Dodson on her trip to Virginia was her husband, Marquis, 24, who&#8217;s a sergeant with the 240th Quartermaster Supply Company in Bamberg. He flew himself over to show his support.

Dodson qualified for the finals of the competition, formerly called Military Idol, by winning a local Schweinfurt contest in August.