Bamberg students save their pennies to raise money for tsunami victims 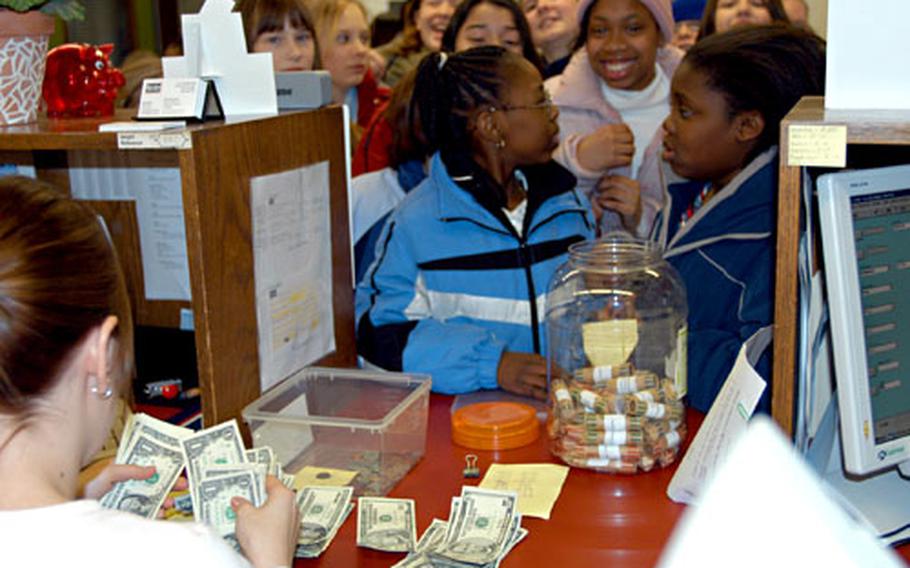 Service Credit Union teller Lisa Bonnes counts money raised by Bamberg Elementary School sixth-grade students as they all squeeze up to the window Thursday. The sixth-grade classes raised more than $300 of the approximately $1,300 collected by the school pupils for tsunami relief. (Rick Emert / S&S)

Pupils from the third and sixth grades collected $863 in pocket change, and a used-book fair raised about $500 more to be donated to tsunami relief efforts.

The sixth-grade pupils &#8212; who are among several groups on U.S. bases in Europe that have helped raise money for the relief effort &#8212; took their collected money to the Service Credit Union on Warner Barracks on Thursday.

Money donated at Service Credit Union branches worldwide by Monday will be matched, up to a total of $50,000, by the credit union and sent to AmeriCares, which has guaranteed that 100 percent of the donations will go to tsunami victims, said Modesto Polintan, Bamberg branch manager.

Roeder said she and the pupils began brainstorming on what they could do to help the day after winter break ended. The official death toll from the tsunami, which hit communities in 11 South Asian and African countries on Dec. 26, has been placed at between 171,000 and 182,000. More than 125,000 are missing, with most presumed dead.