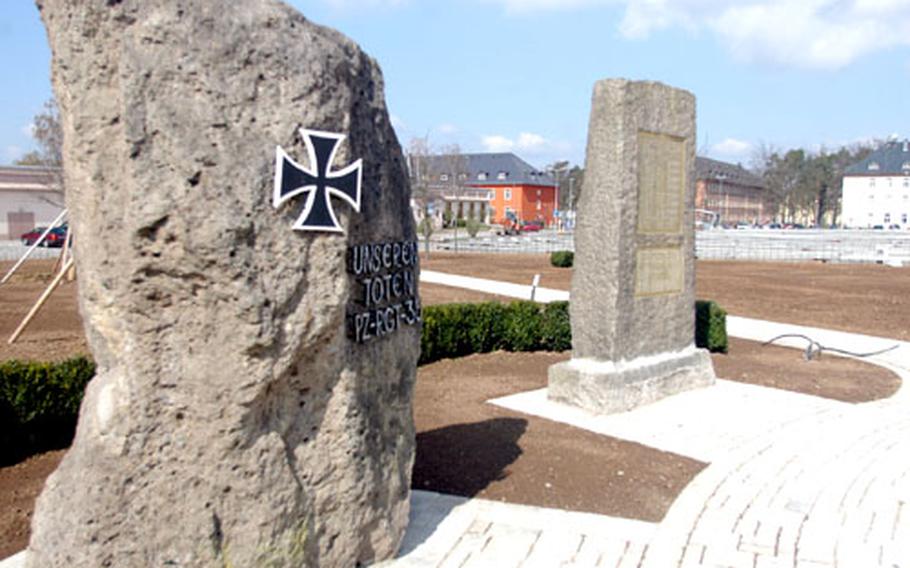 Two German monuments to America’s fallen that were at other locations on Warner Barracks in Bamberg, Germany, have been moved to the site of the new Monument Park, which is set to be complete before an April 28 1st Infantry Division welcome home celebration. (Rick Emert / S&S)

The park, formerly known as Desert Storm Park, will honor soldiers who have served in other wars as well, according to Lt. Col. Daniel Thomas, 279th Base Support Battalion commander.

&#8220;The way the park was designed, it really only honored the soldiers who served in Operation Desert Storm,&#8221; Thomas said. &#8220;I think when the park was originally developed, people expected Desert Storm to be the last conflict of that kind. It dawned on us that we needed something to honor soldiers from all conflicts.&#8221;

With a price tag of about $200,000, the new park includes paved walkways that meet at the monuments in the center, lighting, sod and a new monument that will be completed by June 6, said Dave Thompson, director of public works for the 279th Base Support Battalion.

Other than the monument that is still being carved out of stone, Thompson said, the park is expected to be complete by April 23.

As Desert Storm Park, the area was not easily identified as a tribute to soldiers, with only a Desert Storm monument and other small stones dedicated to specific units that served in the Persian Gulf, Thomas said.

Additionally, two other monument stones that were located elsewhere on the installation were moved to Monument Park.

The park&#8217;s new design puts the various monuments in a circular pattern and has flagpoles to fly some of the various flags associated with Army observances such as Prisoner of War/Missing in Action Recognition Day, he said.

The park will become the site of annual Veterans Day and Memorial Day ceremonies, as well, Thomas said.

&#8220;It is important for a community to have a park like this dedicated to those who have served their nation in arms,&#8221; he said.