Bamberg MPs get a jolt from training on nonlethal Taser 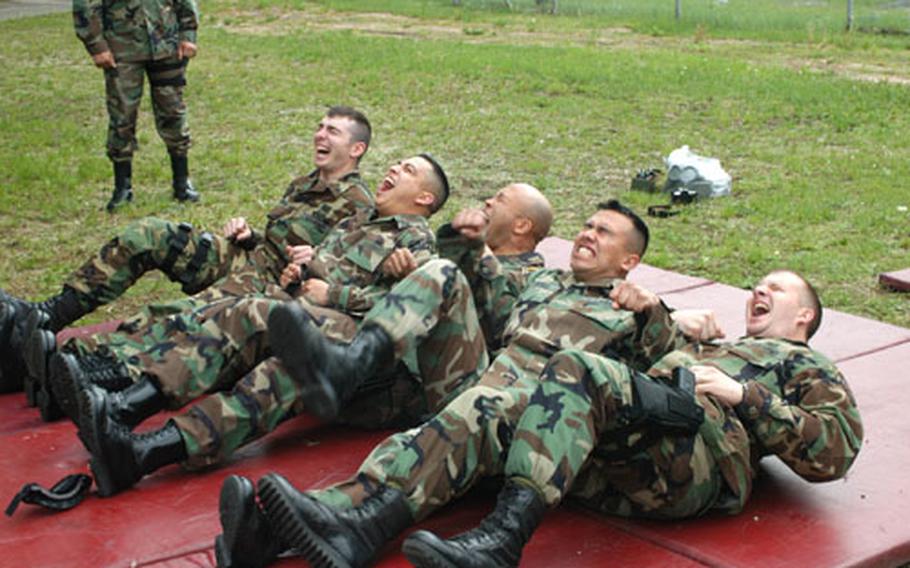 A group of "demonstrators," who seconds before had been chanting, "Hell no, we won’t go," react to the taser on Wednesday. One probe attached to the soldiers at opposite ends was effective on all five. (Rick Emert / S&S)

A group of "demonstrators," who seconds before had been chanting, "Hell no, we won’t go," react to the taser on Wednesday. One probe attached to the soldiers at opposite ends was effective on all five. (Rick Emert / S&S) 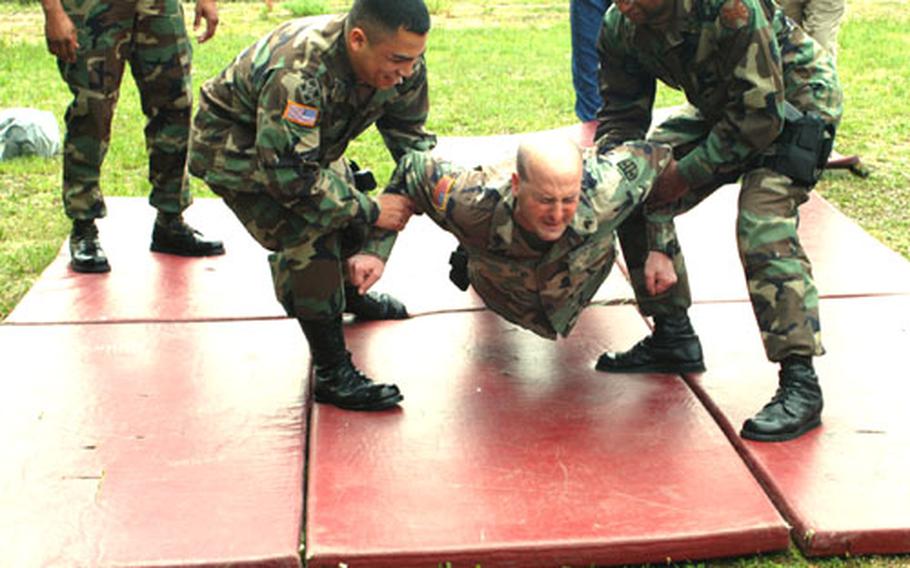 Sgt. Ted Morrison, center, goes down after a burst from the M26 Taser during training Wednesday while being supported by Sgt. Miguel Espinoza, left, and Sgt. Joseph Ward, right. The taser’s five second blast makes it impossible for a "suspect" to stand. (Rick Emert / S&S) 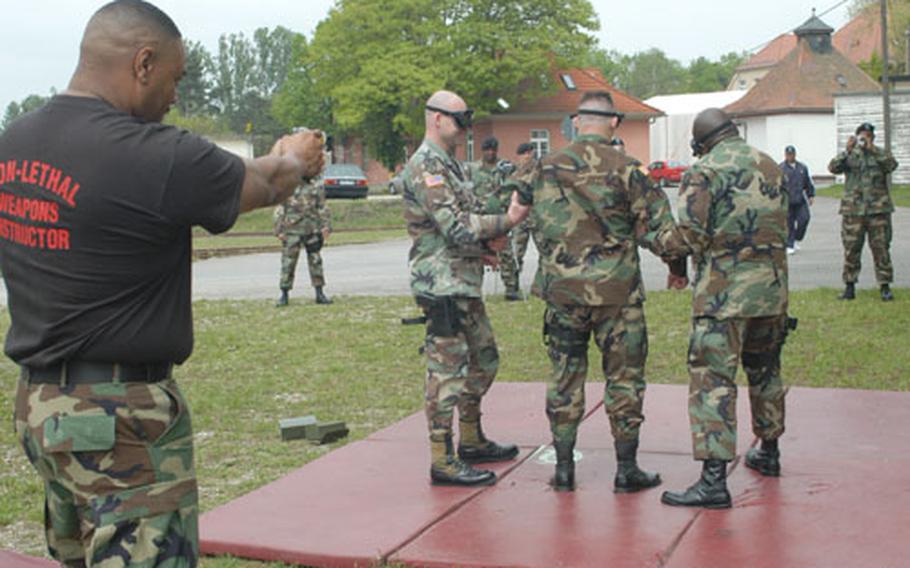 Master Sgt. Jeffrey Palmer, center was the first to take a full hit from the taser on Wednesday, as fired by Sgt. 1st Class Kenny Newborn, a U.S. Army Europe non-lethal weapons team master trainer. Several others had the probes fired at them, but most had the probes hooked to their uniforms to experience the taser. Supporting Palmer are Sgt. 1st Class Stacey Ball, left, and Staff Sgt. Daniel Griffin. (Rick Emert / S&S)

About 25 soldiers from the 793rd Military Police Battalion in Bamberg knew their M26 Taser training would include a written test in the morning.

But the MPs got more than they bargained for in the afternoon session.

Every soldier who attended the training had to experience a burst from the Taser, which operates on 50,000 volts and 26 watts but very low amps, which means there is five seconds of pain but the electrical current is completely safe, according to Eric Niver, U.S. Army Europe Non-Lethal Weapons action officer.

Mandatory exposure to the Taser is an Army policy meant to show trainees how the burst feels and how effective it is in controlling riotous or unruly people, Niver said.

&#8220;The Taser effectively incapacitates a person without causing harm to the suspect or the police officer,&#8221; Niver said.

The burst from the Taser causes electrical muscular disruption &#8212; the suspect loses control of all muscular function for five seconds, Niver said. However, there are no long-term effects, other than the possibility of small pin-sized burns where the probes penetrate the skin.

The Taser is safe even on people with pacemakers, Niver said.

&#8220;At a convention I attended for the X26 Taser, [a smaller but more powerful version], a guy took a hit and mentioned afterward that he had recently had triple bypass surgery,&#8221; Niver said. &#8220;He was fine. It is a perfectly safe, effective tool to control a potentially dangerous situation.&#8221;

The Taser&#8217;s firing cartridge has two probes attached to 21-foot wires. Once fired, the probes need only penetrate a person&#8217;s clothing to be effective.

Several of the soldiers took full hits from the Taser, with the probes being fired at them from about eight feet away. Others had the probes attached to their uniforms and experienced the burst that way.

Immediately after the hit, however, Palmer was able to stand on his own.

Almost everyone at the site, even members of the unit who didn&#8217;t take the course, voluntarily took hits from the Taser as a show of support that would have made the cast of &#8220;Jackass&#8221; proud.