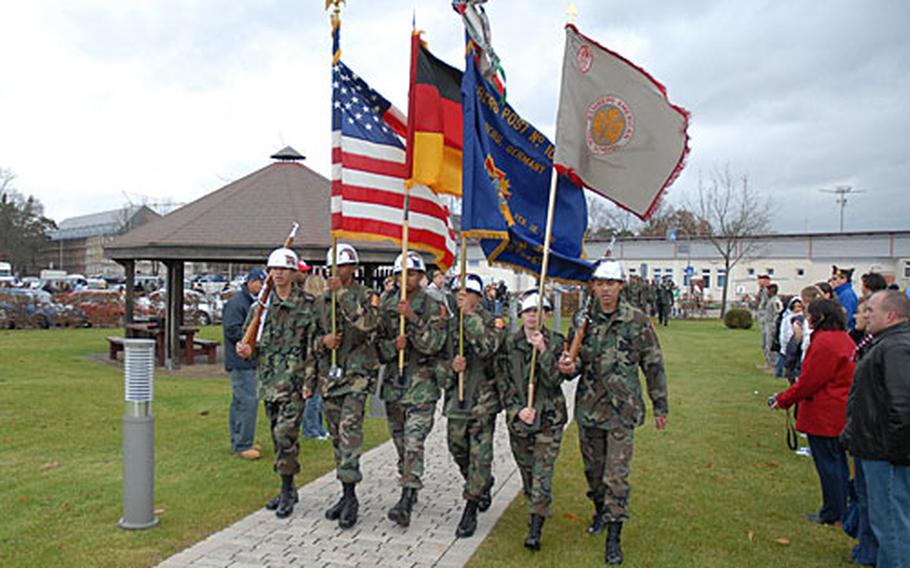 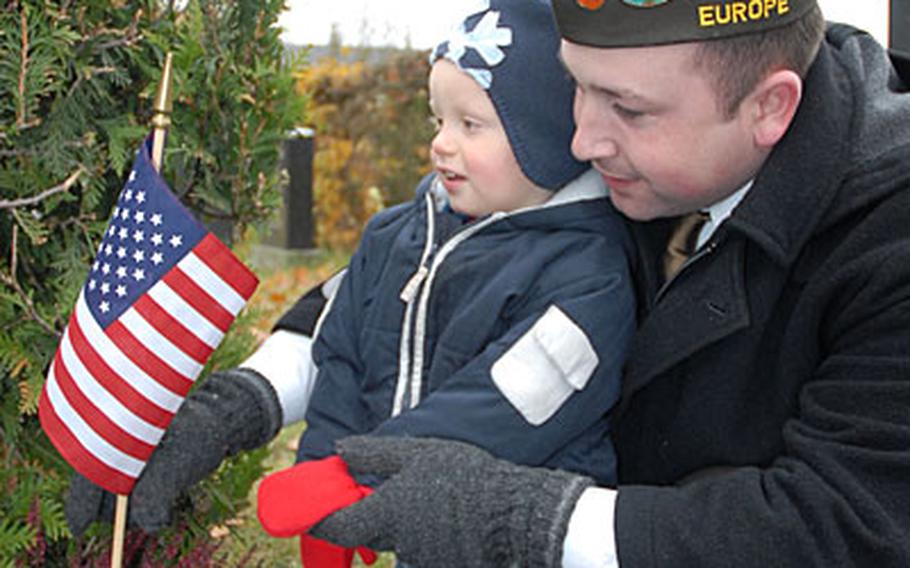 In honor of Veterans Day, Travis Fosmo, a member of Veterans of Foreign Wars of the United States Richard E. Austin Post 10592, and his son Fabian, 2, replace a flag at the grave of an American serviceman at a cemetery in downtown Bamberg, Germany. (Mark St.Clair / S&S)

BAMBERG, Germany &#8212; Hundreds of soldiers, family members and veterans came together Monday to remember the service and sacrifice of American fighting men and women.

As a parade led by Bamberg American High School&#8217;s 15th Junior ROTC Battalion and followed by more than 60 Boy Scouts and Girl Scouts from more than 11 local troops wound through post, the military community gathered at Warner Barracks&#8217; Memorial Park.

In a short ceremony at 11:11 a.m., members of the Veterans of Foreign Wars led the community in the laying of flowers and a wreath.

While Veterans Day observances normally are held on the 11th, the community elected to gather on the 12th due to conflicting religious services.

Honoring the 52 million veterans who have served since colonial times, Pitts said that although the number of Americans is the largest it&#8217;s ever been, the 2.2 million men and women in uniform make up less than one percent of the population, a percentage far lower than previous generations.

Gulf War veteran and VFW member Dave Robinson, who acted as the ceremony&#8217;s chaplain, said he tries to honor veterans &#8220;to never let the American people who have never served forget that there are those who have and are serving to give them the freedoms and benefits of American life as they know it.&#8221;

One of the 50 JROTC members who participated was 17-year-old high school senior Patricia Payton.

Shortly after the activities concluded on Warner, several members of VFW Post 10592 went to a cemetery in downtown Bamberg to place or replace flags at the gravesites of Americans who elected to live and be buried in Germany after their time in service was done.