Bamberg-bound soldiers, spouses get a sneak preview at Vicenza briefing 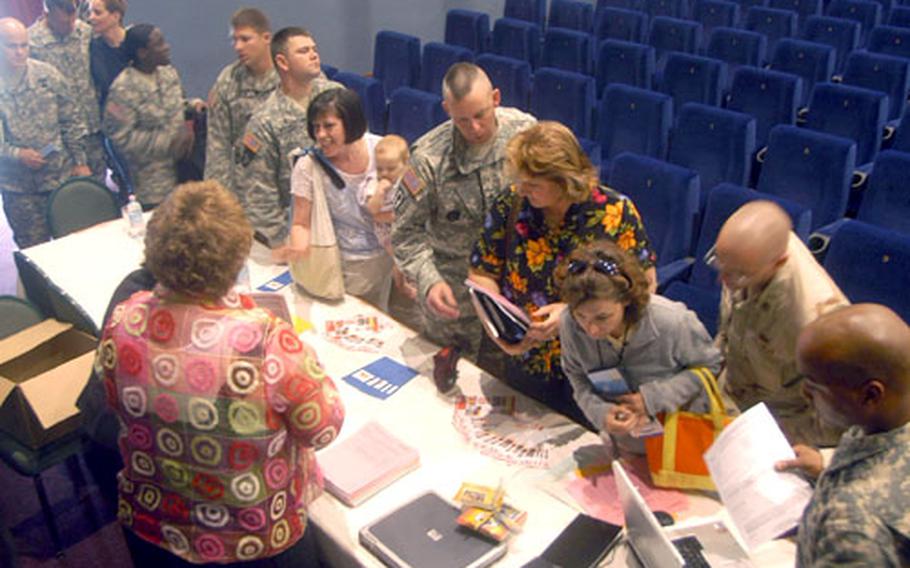 Soldiers and spouses line up for more information Wednesday after a briefing in Vicenza, Italy, for those bound for Bamberg later this year. More than 200 soldiers from Vicenza will likely move north of the Alps, yet stay a part of the Southern European Task Force (Airborne). (Kent Harris / S&S)

Soldiers and spouses line up for more information Wednesday after a briefing in Vicenza, Italy, for those bound for Bamberg later this year. More than 200 soldiers from Vicenza will likely move north of the Alps, yet stay a part of the Southern European Task Force (Airborne). (Kent Harris / S&S) VICENZA, Italy &#8212; A couple of hundred soldiers and their spouses got a glimpse of their future base Wednesday, thanks to a visit to Caserma Ederle by officials from U.S. Army Garrison-Bamberg.

According to all involved, there will be adjustments for the 200 or so soldiers set to move to Bavaria from Vicenza later this year.

The move is supposed to be a temporary one, with soldiers &#8212; or at least their units &#8212; eventually moving back to Vicenza when more space is available.

&#8220;You need to get ready to switch from wine to beer,&#8221; Lt. Col. Mark Gatto, the garrison commander in Bamberg, said with a smile. After all, he said, the city has one of the highest breweries-per-capita in Germany.

Of course, there will likely be bigger adjustments than that. But Gatto, as well as military authorities in Vicenza, promised to help.

&#8220;This command is doing all it can to make this move the least stressful as possible,&#8221; Maj. Gen. Jason Kamiya, commander of the Southern European Task Force (Airborne), told the large group gathered in the base theater.

Still, he said, soldiers and spouses will have get involved in the move as well: &#8220;This command is not in the business of spoon-feeding soldiers and their families.&#8221;

That said, those attending Wednesday&#8217;s briefing got a few helpings of information.

Gatto and several of his staff members had slides and brochures on a variety of topics and then answered dozens of questions from the audience. Housing, job opportunities for spouses, driving requirements and schools were hot issues.

Gatto admitted such a briefing wasn&#8217;t exactly commonplace, but said these are unique circumstances. &#8220;And any time I have an opportunity to talk to people about my community, I&#8217;m going to take it,&#8221; he said.

U.S. Army Europe officials decline to say which specific unit or units are moving to Bamberg, citing a potential for changes in the transformation process. In fact, when Kamiya asked the audience how many actually had new orders in hand, only one hand was raised.

The 173rd Airborne Brigade is supposed to gain more soldiers in its transformation into a so-called Army Unit of Action, but currently, there&#8217;s not enough room at Caserma Ederle. The U.S. has been negotiating with the Italian government to use the Dal Molin airfield in Vicenza; those talks are ongoing.

Kamiya, who visited Bamberg recently with his wife, Carmen, said soldiers who transfer to Bamberg would have a little more elbow room.

Still, there were a few audible groans in the audience when Gatto admitted the commissary and post exchange in Bamberg were probably going to be a step down for those coming north.

Soldiers and spouses who attended the briefing were urged to put their names on housing and school lists as soon as they receive orders. And the commands plan to host a visit by soldiers or their spouses to Bamberg later this month.

Capt. Jon Zimmer was one of those planning to head north.