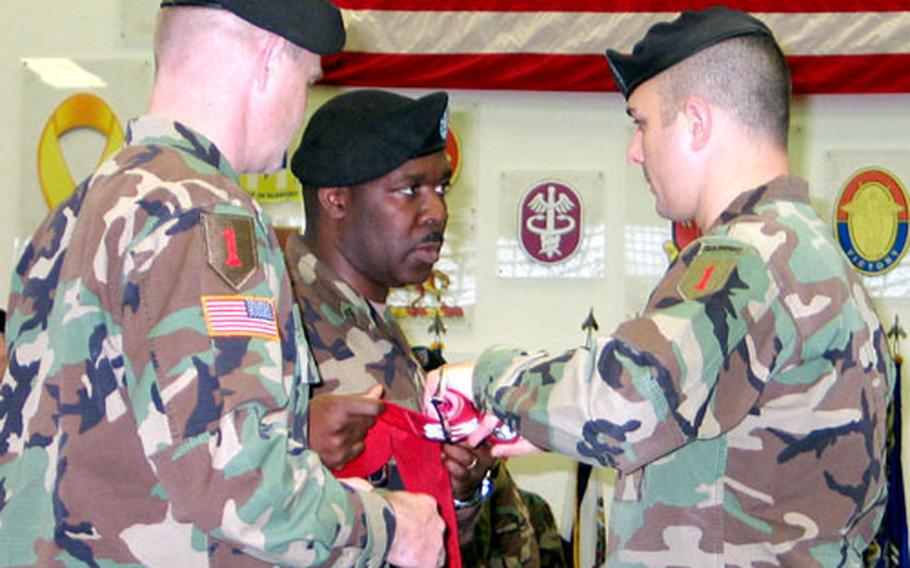 Company A of the 1st Infantry Division&#8217;s 82nd Engineer Battalion &#8212; a unit that saw combat in World War II, Desert Shield/Desert Storm and Operation Iraqi Freedom &#8212; cased its colors Tuesday as part of the Army&#8217;s transformation in Europe.

The Bamberg, Germany-based battalion will inactivate by March, transform into a brigade troops battalion and join the 173rd Airborne Brigade at Vicenza, Italy.

U.S. Army Europe spokesman Bob Purtiman said the move is part of the 1st Infantry Division&#8217;s return to the U.S.

Maj. Storm Reynolds, the 82nd&#8217;s executive officer, said the new battalion will include some engineers as well as signal, military police and military intelligence components.

&#8220;The transformation requires a lot of detailed planning, but ultimately our goal is to reduce the turbulence and impact on soldiers and families,&#8221; Reynolds said.

In February 2004, Company A deployed to Diyala province in Iraq&#8217;s volatile Sunni Triangle.

Information provided by the battalion showed that during the year in Iraq, Company A conducted more than 900 patrols, was under direct fire 14 times and encountered more than 40 roadside bombs. Seven members of the unit were killed in action and 18 were wounded in action.

&#8220;I will always remember your determination and desire to complete the task and finish off the insurgents in an area so distant from the security of our own forward operating base,&#8221; the 82nd battalion commander, Lt. Col. Gerald O&#8217;Connor, said during the ceremony.

Spc. Melvin Christmann, who served with Company A for five years in Bamberg, will transfer to the 82nd&#8217;s Headquarters, Headquarters Company until it also inactivates.

&#8220;To see the doors close on this unit is saddening because for a long time it has been a unit that has completed its missions to the highest standard,&#8221; he said in remarks provided by Bamberg public affairs officials.