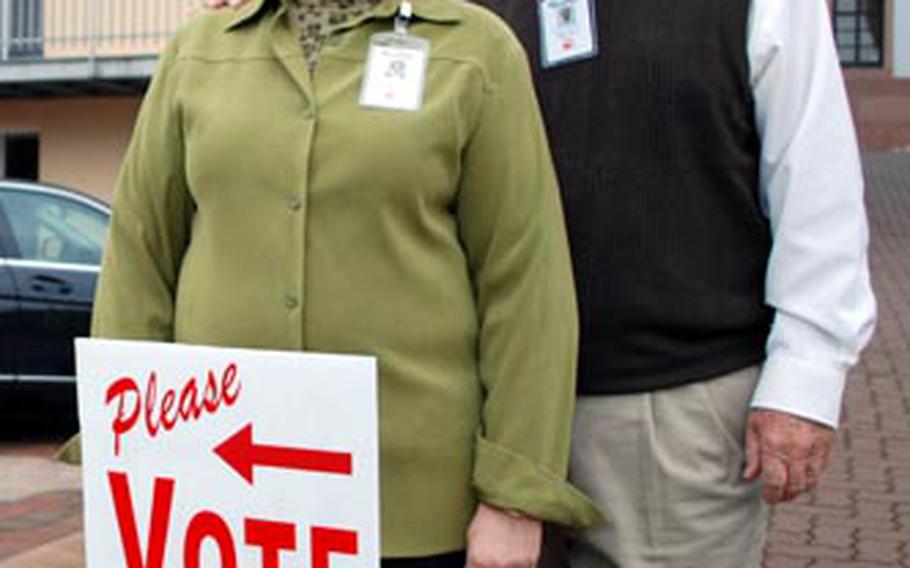 Barbara and Tom Wood, volunteers with the Okaloosa Distance Balloting Project, stand by a sign directing Okaloosa County, Fla., voters to a polling place just miles down the road from Ramstein Air Base. (Matt Millham / S&S)

RAMSTEIN, Germany &#8212; With the U.S. election bearing down, Tom and Barbara Wood are keeping their fingers crossed. Not for McCain. Not for Obama.

Turnout at the remote voting kiosk manned by the husband-and-wife team has so far been anemic, and they&#8217;re looking for votes &#8212; any votes.

They are volunteers with the Okaloosa Distance Balloting Project, an initiative to improve overseas voting for military members.

The electronic voting kiosk such as the one the Woods have manned since Oct. 25 could be a model for the rest of the U.S. in future elections, they said.

But right now, only Okaloosa County, Fla., residents can take part, and lackluster participation isn&#8217;t making it easy to gauge just how safe and successful the kiosks could be.

By Friday afternoon, only a handful of the estimated 300 eligible Okaloosa voters living in the Ramstein area had come in to cast ballots, "which is disappointing," Barbara Wood said.

The Woods hoped at least 100 voters from the county would vote at the "booth," set up in a rented hotel room just miles down the road from Ramstein Air Base.

The Woods were, nonetheless, optimistic that more Okaloosa voters would drop in before Sunday evening, when they&#8217;ll have to pack it in and hop a flight back to the Florida panhandle.

They&#8217;ll be open at least from 10 a.m. to 4 p.m. Saturday and Sunday, but could be available to help voters at other times if they call ahead.

"We feel like this is definitely going to be the future of voting," Wood said.

She&#8217;s keeping her fingers crossed "that if it goes well, it will be the whole state next time," she said.

Voters who already cast absentee ballots by mail can come in to cast a secure electronic ballot, according to the Woods.

If voters choose to do that, the electronic ballots supersede the paper ballots. That means Okaloosa voters overseas could, theoretically, change their vote.