Balikatan life anything but pampered for some 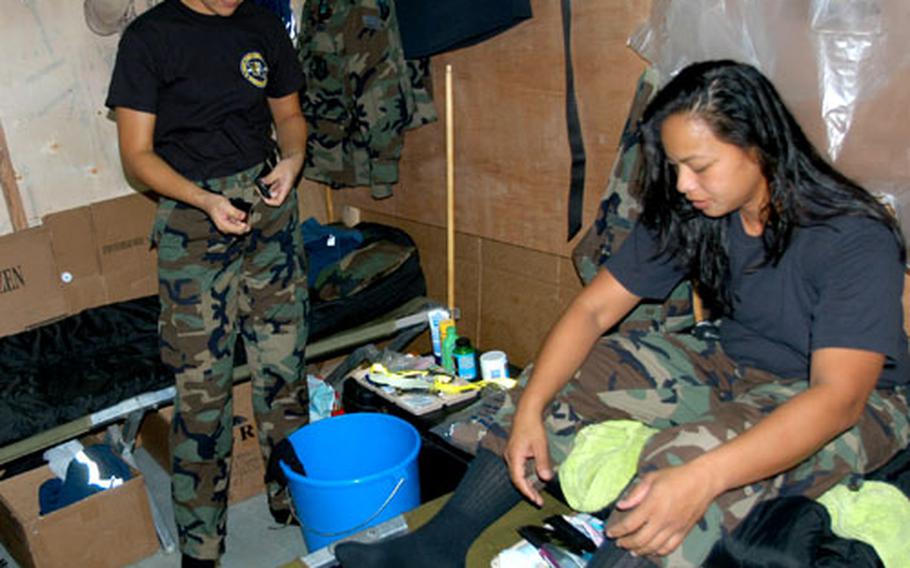 Senior Airman Denise Perez, left, and Staff Sgt. Rose Castro hang out Tuesday in their makeshift barracks at Fort Magsaysay, Philippines. The cooks from Guam International Guard’s 254th Services Flight are among more than 400 soldiers roughing it at the Philippine army camp during the Balikatan exercise. (Jennifer H. Svan / S&S)

Senior Airman Denise Perez, left, and Staff Sgt. Rose Castro hang out Tuesday in their makeshift barracks at Fort Magsaysay, Philippines. The cooks from Guam International Guard’s 254th Services Flight are among more than 400 soldiers roughing it at the Philippine army camp during the Balikatan exercise. (Jennifer H. Svan / S&S) 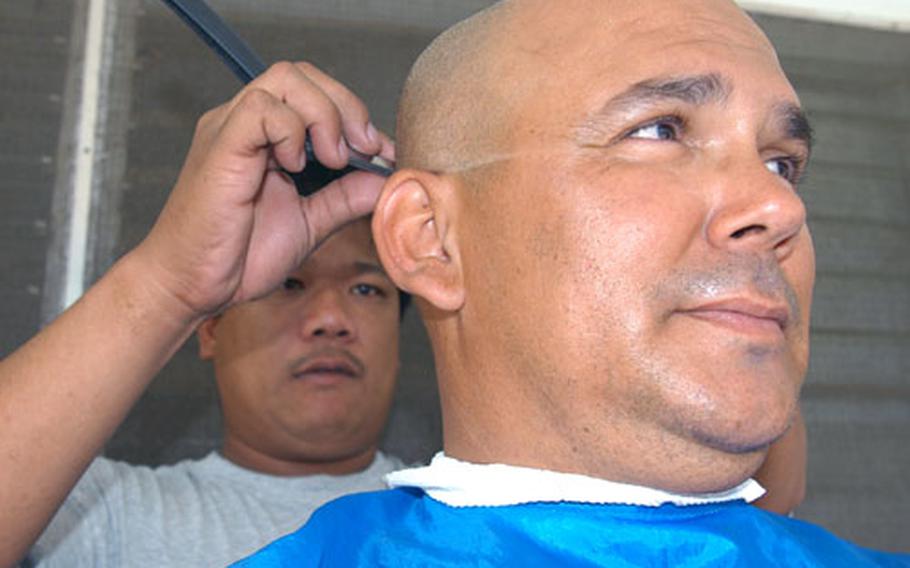 Spc. Elven Escobar, a member of the 1-185 Armor headquarters from San Bernardino, Calif., gets a haircut from a local barber. (Jennifer H. Svan / S&S)

Just ask the hundreds of other U.S. troops spending these weeks in a remote army camp in a tropical climate without without air-conditioning or an Internet connection, coping with outdoor showers and portable toilets.

That&#8217;s life at Fort Magsaysay for more than 400 soldiers training here for the annual Balikatan military exercise between the U.S. military and Armed Forces of the Philippines.

While a host of other U.S. troops involved with the exercise are lodging in a four-star hotel at the former Clark Air Base, soldiers from Hawaii, California and Guam are hunkered down at a Philippine army camp about two hours by car to the east, where they&#8217;re conducting field training with Philippine soldiers.

A big part of the job is coordinating with local contractors to bring in equipment including portable toilets, beds, drinking water and building supplies.

Also a challenge, when you&#8217;ve got that many troops&#8217; comfort to look after is the numbers involved: 5,000 gallons of non-potable water per day, 200 loads of laundry to be counted daily (a local contractor does the wash off camp) and a 30-day supply of Meals, Ready to Eat for each soldier, one per day.

About 70 military vehicles were brought in on containers from a U.S. military ship, Parker said. Those all will have to be scrubbed and cleaned before they&#8217;re reloaded for home after Balikatan ends Sunday.

The soldiers get MREs for lunch and a hot meal for breakfast and dinner, said Master Sgt. Jerry Damian, among a handful of cooks from the Guam International Guard&#8217;s 254th Services Flight.

The cooks live where they work: The 10th ASG soldiers erected makeshift barracks rooms in the cafeteria building, one side for the males and the other for three female cooks, also from Guam.

Since the current liberty restriction for all U.S. military members taking part in Balikatan limits them for the most part to their training and billeting areas, free time is spent, well, at camp.

Exercise &#8212; basketball, volleyball and running &#8212; hanging out and playing music are the most common leisure activities, the cooks said. They don&#8217;t mind too much: &#8220;It makes us appreciate what we have at home,&#8221; said Senior Airman Cindy Fejaran.