Balikatan begins in Philippines as recovery work goes on 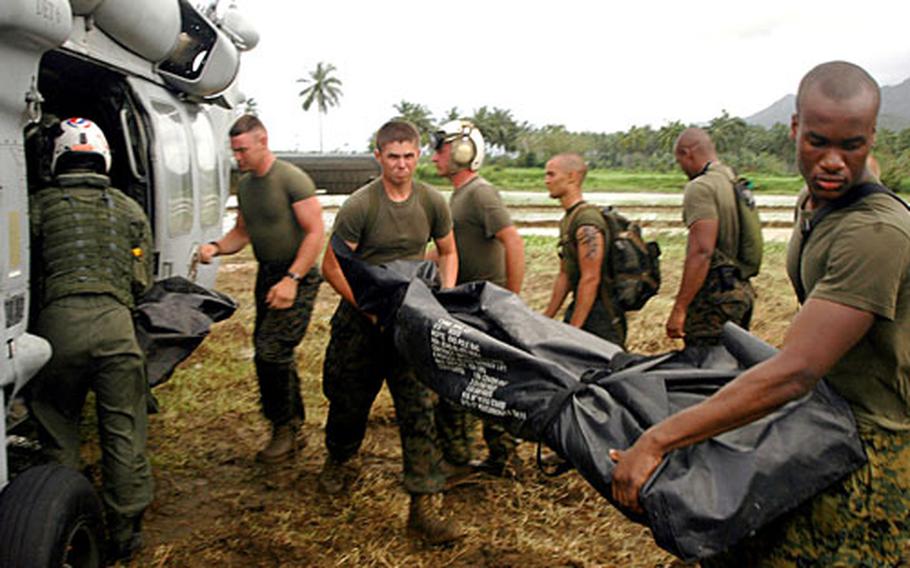 CAMP FOSTER, Okinawa &#8212; As U.S. troops continued to struggle through the mud and driving rain Wednesday to dig out the victims of last Friday&#8217;s landslide on the Philippine island of Leyte, the exercise Balikatan &#8216;06 officially began in the southern Philippines.

Although more than 1,500 U.S. troops and their equipment were diverted last weekend in support of relief efforts to the farming village of Guinsaugon, more than 3,500 others prepared to start training with their Philippine counterparts in Jolo, according to U.S. Marine Brig. Gen. Mastin M. Robeson, commander of Joint Force Balikatan &#8216;06.

One U.S. official, according to a Joint Task Force press release, noted the troops were already geared up for responding to a natural disaster.

He said part of the exercise would have been providing relief for the disaster scenario while simultaneously running other aspects of Balikatan &#8216;06.

The scene on Leyte remained grim Wednesday as hundreds of Philippine, American and international relief workers gave up hope of finding anyone alive under more than 30 feet to 100 feet of mud and boulders that buried the village.

Some 1,000 people, including 240 elementary schoolchildren, still are missing, according to Philippine disaster officials. As of Wednesday afternoon, 107 bodies had been pulled out of the muck.

Besides digging for the dead, relief workers also were caring for 400 villagers who escaped the mudslide and some 1,600 people evacuated from nearby villages.

Some U.S. troops already have left the area.

&#8220;We left Tuesday afternoon,&#8221; said Air Force Lt. Col. Chuck Metrolis, commander of the 31st Rescue Squadron from Kadena Air Base, Okinawa. His 18 pararescuemen specialize in performing rescues in all sorts of situations, including extracting people from confined spaces.

&#8220;But there&#8217;s no one alive to rescue,&#8221; Metrolis said via cell phone from Clark Field, near Manila, where his team was resting and preparing to participate in Balikatan.

Capt. Burrell Parmer, spokesman for the 31st Marine Expeditionary Force, which is still on Leyte, said the U.S. military contracted with a Manila-based company to have a 2-ton drill rig delivered to the disaster site to assist in the search-and-rescue effort.

Parmer, speaking via cell phone from the site, said the drill, which cost about $7,000, would be delivered as a &#8220;sling load&#8221; underneath a CH-53E Super Stallion helicopter. He said the drill is capable of drilling about 200 feet deep and is equipped with a pump that can clear mud, dirt and small rocks.

Troops from the 31st MEU&#8217;s 2nd Battalion, 5th Marines&#8217; Company G replaced the unit&#8217;s Company E after three days on the mudline, Parmer said. As of Wednesday afternoon, they had recovered the bodies of 13 Filipinos.

Parmer said he did not know how long the Marines would remain.