From left: Gunnery Sgt. Blaine Jones, Cpl. Glenn Trahan, Cpl. Jordan Gowland and Lance Cpl. Josh Tebben -– with Okinawa’s 3rd Reconnaissance Battalion -- wait Friday on a drop zone that was once part of the U.S. Air Force’s Clark Air Base in the Philippines. The team was providing parachute training for members of the annual Balikatan training exercise. (T.D. Flack / S&S) 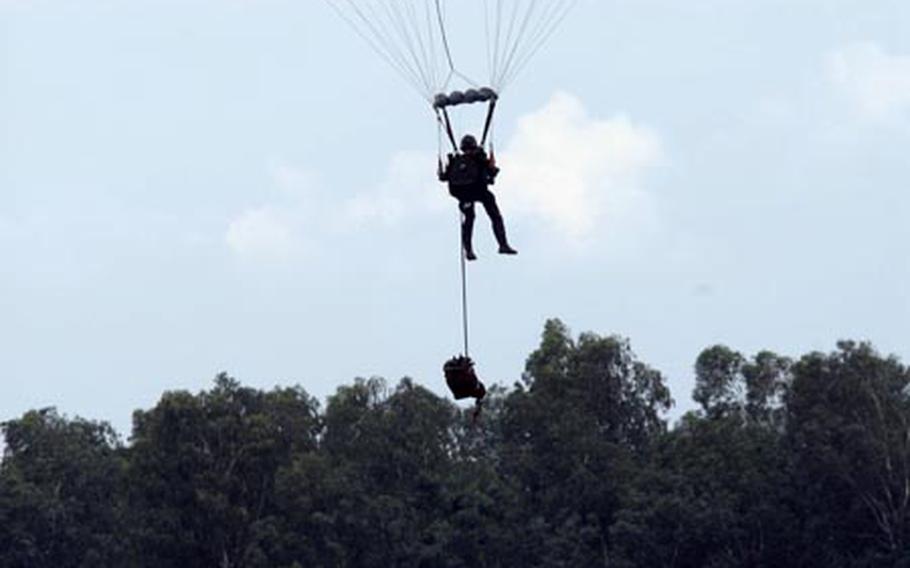 A Marine from the 31st Marine Expeditionary Unit’s Amphibious Reconnaissance and Deep Reconnaissance platoons parachute Friday onto a drop zone on what was once the U.S. Air Force’s Clark Air Base in the Philippines. Members of Okinawa’s 3rd Reconnaissance Battalion provided the training to the 31st MEU Marines and Philippine forces as part of the annual Balikatan training exercise. (T.D. Flack / S&S)

The reconnaissance Marines extended a training trip to the Philippines so they could play a part in Balikatan 2009 &#8212; an annual U.S.-Philippines training exercise.

Weather is a major factor with any parachute training. A low cloud ceiling, limited visibility or heavy winds can cancel a jump, and as the clock ticked Friday, ominous clouds began rolling in over the mountain range on the horizon.

At the drop zone, a small team of recon Marines sweltered in the sun early in the morning, trying to stay hydrated while waiting for the Okinawa-based C-130s to take off with their crews.

As they settled in to wait, Gunnery Sgt. Blaine Jones, jumpmaster and senior enlisted in the detachment, explained that the drop zone team&#8217;s goal was to communicate with those in the plane, letting them know about ground conditions.

The overall training focuses on teaching the Philippine troops and U.S. Marines the finer points of parachute operations, with an emphasis on exiting the aircraft, parachute canopy control and keeping strong traffic control in the air while heading toward the ground.

For the two platoons of recon Marines attached to the headquarters element of the 31st Marine Expeditionary Unit &#8212; the main chunk of U.S. Forces in Balikatan &#8212; the training would help them get qualified to jump with the Corp&#8217;s newest Multi-Mission Parachute Double Bag.

"It&#8217;s a great insertion capability," he said, that allows Marines to jump from higher altitudes and travel further undetected.

Those 31st MEU recon Marines would be the first off the C-130 Friday on a high-altitude, high-opening jump, with full combat loads. The Philippine forces, jumping with the older, "round chutes," would be out next at higher passes.

He said keeping the jumpers in a tight formation, with everyone following the first jumper, is key.

"They have to stay stacked tight," he said, or they&#8217;ll "waste a lot of time" trying to locate each other on the ground.

Both Jones and Hunt stressed that the training keyed on the basics &#8212; with a focus on safety. That&#8217;s especially important when working with new equipment or techniques, Jones said.

During recent training, Jones said three troops have had to cut away their main parachute systems and deploy the reserve chutes because of malfunctions.

"There are procedures in place, and they work," he said.

By mid-afternoon, Jones&#8217; team got the word that they troops were back on the C-130 and ready to jump on the zone, located in a far corner of former Clark Air Base.

The Marines on the ground quickly counted the jumpers, worrying about cut-aways.

"I&#8217;ve got seven, does anyone else count all seven," one Marine shouted.

All eyes scanned the sky, looking for the dots.