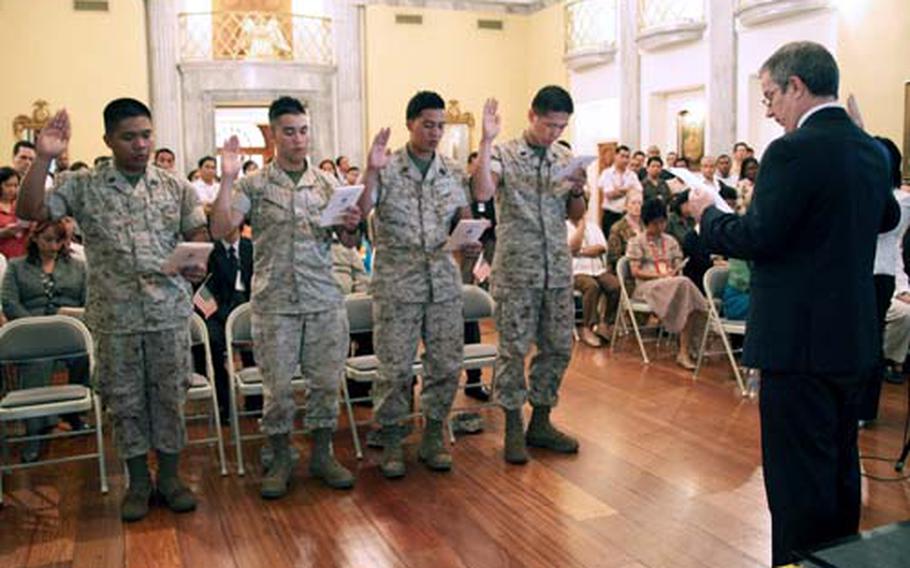 MANILA, Philippines &#8212; Four U.S. troops in the Philippines for an annual training exercise became American citizens during a naturalization ceremony at the U.S. Embassy on Monday, according to a military news release.

Marine Lance Cpl. Jose Rodriguez Peralta and three sailors, Mario Vinoya, Renny Vitug, and Jin Lin &#8212; all hospitalmen &#8212; were the first U.S. troops to be naturalized at the embassy in Manila since former President George W. Bush signed an executive order in 2003 allowing U.S. troops to go through the ceremonies at overseas locations, according to the release.

"Being an American citizen means more than love of country," U.S. Ambassador to the Philippines Kristie Kenney said in the release. "It means being a good citizen, a voter, respectful of laws and rules and being willing to stand up for our country, just as these four gentlemen are now doing."

But she urged them not to abandon their roots.

"As the four of you take the oath of citizenship, I am proud you&#8217;ve chosen the United States to be your home," she said. "I hope you will never forget the culture, heritage and riches of your countries of birth."

Vinoya and Vitug are both natives of the Philippines.

"I feel special that I was part of the first ceremony here. It&#8217;s kind of overwhelming and people we didn&#8217;t even know were here and happy for us. It&#8217;s awesome," Vitug said in the release.

Vinoya, who turns 23 on May 5, called his citizenship the best birthday gift he&#8217;s ever received.

"This is still my homeland and my heart still belongs here. I still have Filipino blood running through me," Vinoya said.

Rodriguez Peralta, a combat engineer, was born in Mexico and moved to Texas as a child.

"I have always wanted to do my part and serve. I felt like I was needed, so I joined," Rodriguez Peralta said in the release. "It feels great to be a citizen."

Lin, who was born in China, said in the release that he felt brand new and accomplished after earning his U.S. citizenship.

Nearly 5,000 U.S. troops have been in the Philippines since mid-April for the Balikatan exercise.