Balancing safety and prosperity in Muhallabiyah 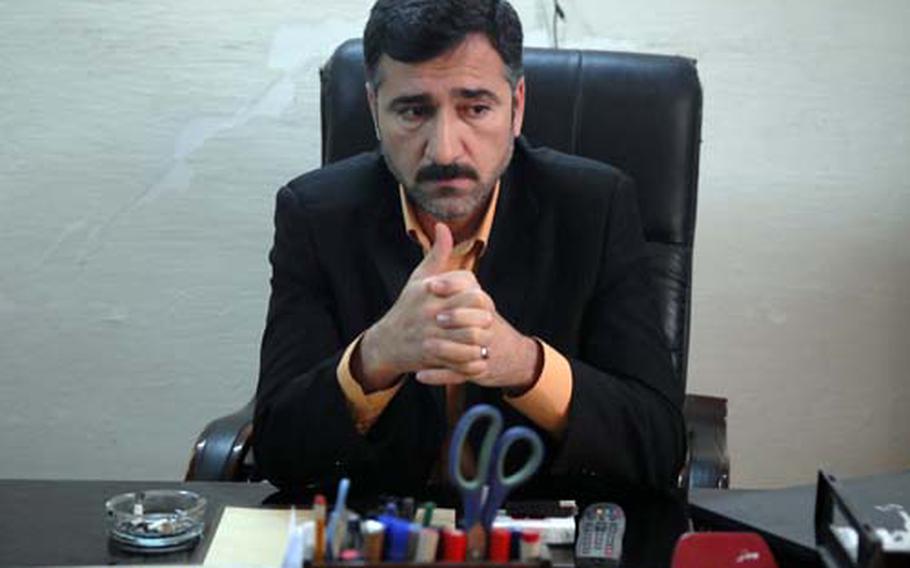 Abdul Rahman, the mayor of former insurgent stronghold Muhallabiyah, talks about his struggle to improve security in his town. Fourteen of his relatives have been killed since he took office. (Heath Druzin/S&S)

Abdul Rahman, the mayor of former insurgent stronghold Muhallabiyah, talks about his struggle to improve security in his town. Fourteen of his relatives have been killed since he took office. (Heath Druzin/S&S) Staff Sgt. Jason Jesperson prepares for a joint patrol with Iraqi soldiers at the Muhallabiyah Iraqi Army compound in northern Ninevah province. The town was run by insurgents for a number of years but severe road restrictions and other security measures has greatly reduced violence in the area. (Heath Druzin/S&S)

MUHALLABIYAH, Iraq &#8212; The cost of safety in this fortress city is evident in the sad determination of Abdul Rahman&#8217;s eyes. A day after the latest attempt on his life, Rahman, Muhallabiyah&#8217;s mayor, grimly vowed to continue leading an effort that has seen his town go from insurgent stronghold to quiet rural outpost.

In streets once laden with bombs and filled with gunfire, Muhallabiyah residents now walk in relative safety. There hasn&#8217;t been an attack since last summer.

Traffic is light on the streets and in the town&#8217;s once-bustling main market. As part of a campaign to try to stop the flow of fighters and weapons, Iraqi soldiers and police have blocked all but one route into town and require drivers to show resident badges to enter. Visitors are virtually banned from coming to town.

Most of Muhallabiyah&#8217;s residents are without jobs. And shop owners say safety measures have hurt business in the town, which, like much of Iraq, is navigating the uneasy intersection of security and freedom.

Some are calling for a rollback of security restrictions to allow shoppers from nearby towns to come to Muhallabiyah, as they did before residential badges were issued.

"The security got better so there&#8217;s no need for people to get a badge to get into [town]," said Ali Abdul Khadar, standing outside his small shop in the town&#8217;s main market.

Located at the barren edge of the Jabal Sheikh Ibrahim Mountains, a geological hiccup gently rolling above the desert of northern Ninevah province, Muhallabiyah and its surrounding villages were controlled by Sunni insurgents for several years after the U.S. invasion in 2003.

The area was so thoroughly infiltrated that when the Iraqi army finally kicked out insurgents in 2007, they disbanded the police station, saying the officers could not be trusted.

Amid fierce fighting for control of the city, Rahman won election as mayor and has paid a horrifying price ever since for his efforts to battle the insurgency: Fourteen relatives, including an uncle and numerous cousins, have been murdered in the past year in retaliation for the mayor&#8217;s stand. Rahman himself was shot in the leg during one of three attempts on his life, and two of his police bodyguards were injured Sunday in the latest assassination attempt, this one in the form of a roadside bomb.

He has run the town by himself after a city councilman was assassinated in 2007 and the rest of the council fled amid death threats.

He smiles when asked why he continues in his job despite the daunting threats.

"If everyone gives up because of the terrorists, who is going to work for Iraq?" he said.

Extreme security measures are commonplace in many Iraqi cities, although Muhallabiyah, which also has a protective earthen berm around the city, is more locked down than most.

In and around nearby Tal Afar, once a chaotic battleground during the more violent days of the Iraq war, attacks have ebbed. Roads are clogged with checkpoints and driving anywhere in the region is a slow, arduous ordeal, assuming you can find a travel partner. It is illegal to drive alone around Tal Afar, a rule aimed at reducing the threat of suicide car bombs.

Security has not brought economic recovery to Muhallabiyah. Local estimates put unemployment as high as 80 percent and the town gets no more than a few hours of electricity every day.

Business owners grumble at the reduction in traffic into town caused by the severe road restrictions, but the mayor has remained wildly popular, recently winning re-election and recently gaining a seat on Ninevah&#8217;s provincial council, roughly equivalent to a state legislature.

Many townspeople seem torn about the road restrictions &#8212; they blame them for economic depression &#8212; but not everyone is ready to get rid of them.

"The most important thing is the security," said Allah Hussein, 30, who said he has seen business drop at his hardware store since security restrictions were put into place.

Muhasin said he has little sympathy for people who complain. "It is their problem because they were laying [the bombs]," he said.

U.S. soldiers in the area say Muhallabiyah&#8217;s security turnaround is encouraging because it was an almost entirely Iraqi effort. But Maj. Kenneth N. Reed says at some point the town will have to find a better balance between safety and prosperity.

"No matter how well you have the security situation, if you&#8217;re not providing for the people, you&#8217;re never going to move forward," said Reed, with the 3rd Heavy Brigade Combat Team, 1st Cavalry Division.