Balad hospital workers cope with the pain of wounded children 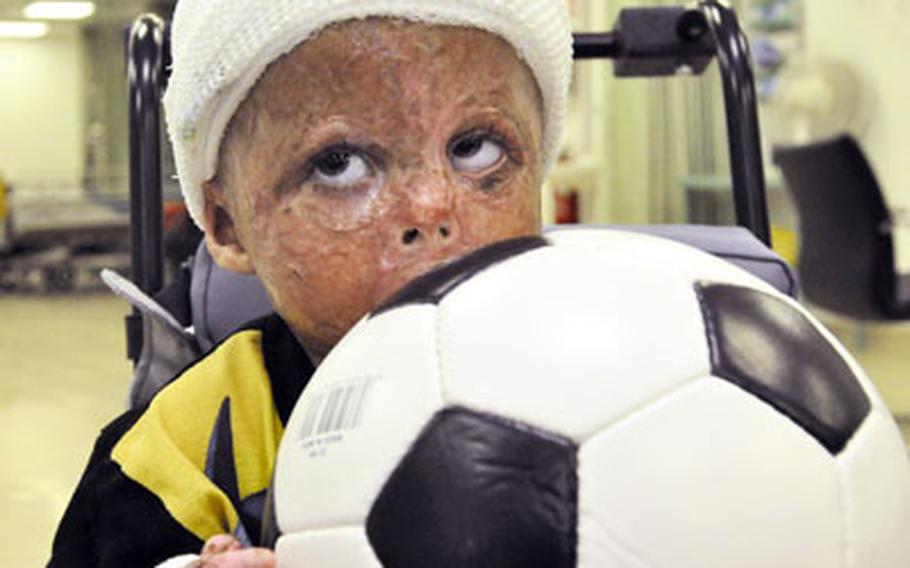 Buy Photo
Tarik, 3, arrived at the Air Force Theater hospital nearly three months ago with severe burns to his legs, arms and face after stumbling into a fire. It’s not just the roadside bombs and stray bullets that make it dangerous to be a child in Iraq. (Seth Robbins/Stars and Stripes)

Buy Photo
Tarik, 3, arrived at the Air Force Theater hospital nearly three months ago with severe burns to his legs, arms and face after stumbling into a fire. It’s not just the roadside bombs and stray bullets that make it dangerous to be a child in Iraq. (Seth Robbins/Stars and Stripes) 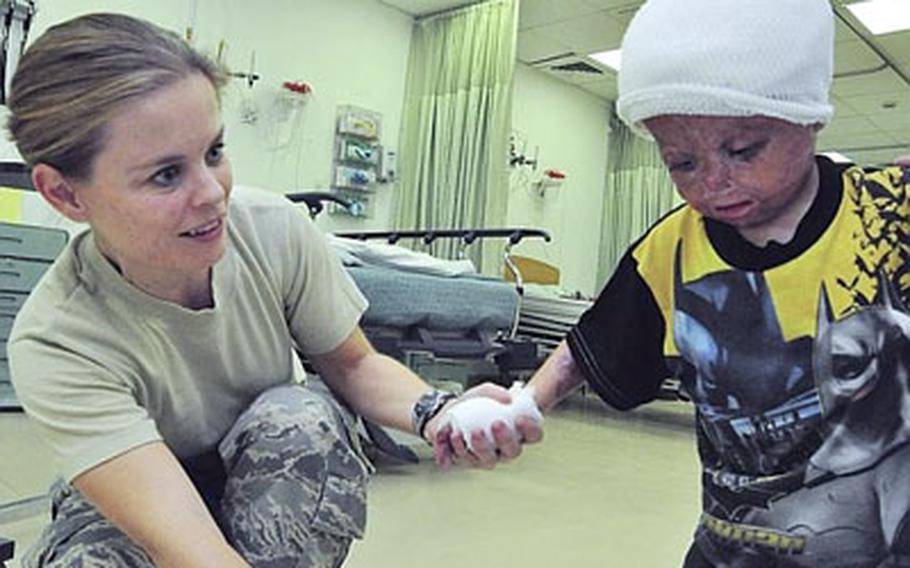 Buy Photo
Capt. Meredith Sarda, a pediatrician at the Air Force Theater hospital, holds Tarik’s hand as he walks down the hallway. Tarik, 3, stumbled into a fire about three months ago, which left second- and third-degree burns on more than half of his body. Below: Tarik puts his bandaged hands in Sarda’s at the ward in the Air Force Hospital in Balad, Iraq. (Photos by Seth Robbins/Stars and Stripes) 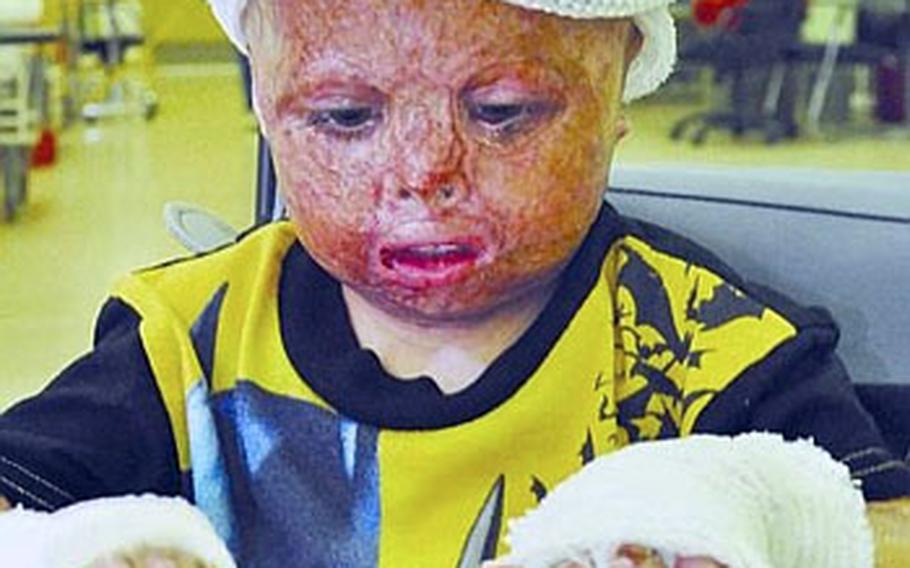 Tarik puts his bandaged hands in Sarda’s at the ward in the Air Force Hospital in Balad, Iraq. ()

JOINT BASE BALAD, Iraq &#8211; Five-year-old Sajad was taking a short ride with his grandfather when a roadside bomb exploded. The boy&#8217;s lower body was burned and his left leg was smashed, chunks of it sheared away in the blast.

"I could see the bone," said his father, Hani Shaker Mahmod, who pulled his son from the burning car with the help of his wife. "There were burns and blood everywhere."

Capt. Michelle Marino, a pediatric anesthesiologist, was part of a team that recently treated Sajad following theJan. 24 blast. The Air Force Theater Hospital, where Marino works, was set up to stabilize injured troops before they could be airlifted elsewhere. It was not designed for children, and though hundreds have arrived in recent years &#8211; many of them mangled in bombings &#8211; supplies to treat them remain limited when compared to a major U.S. hospital.

So the doctors improvise, figuring ways and fashioning devices to save their small patients.

Marino snaked an adult-sized catheter from Sajad&#8217;s inner arm to his heart, making it easier to give him fluids and draw blood. She also retrofitted a large face mask to give him oxygen. The surgeons worked on Sajad for more than 14 hours, performing skin grafts and attempting to repair his left leg, but eventually they had to amputate. His stump is now wrapped in a pink bandage.

"The ones who have been in the blasts, their little bodies come in so broken," Marino said, as she gazed at Sajad through a glass window. "It&#8217;s hard, especially with these blast injuries. You never want to see a child suffer like that."

Sajad, who has short brown hair and a round face, stared expressionless at his uncle, Saddam Shaker Mahmod. Mahmod was trying to get him to play with a rainbow slinky. A toy fire truck rested at the end of his hospital bed.

The day after the surgery, Sajad asked his uncle: "Where is my foot?"

"I told him that the doctors are going to fix it," his uncle said.

With the wars in Iraq and Afghanistan having no front lines, children often become collateral damage. More than 1,000 children were admitted to U.S. military hospitals from December 2001 to December 2004, according to a 2006 study. Even as violence in Iraq has abated, records show that doctors at the Air Force Theater hospital have treated 413 patients under the age of 13 since July 2007.

Still with fewer wounded troops &#8212; about 900 servicemembers were seen at the hospital since July 2009, the majority not injured in combat &#8212; the hospital&#8217;s staff can devote more time and bed space to Iraqi patients, including children. Yet no one knows what will happen to the hospital after the withdrawal, and that has some Iraqis worried.

"People who get to this hospital, they have a chance to live," said Ezalden Sabar Qazam, whose 3-year-old son Tarik was being treated at the hospital. "Some people get here, and some people die."

And just being a kid in Iraq can be dangerous. Since electricity is sporadic, fires for cooking and bathing abound, and children often arrive at the hospital with severe burns, said Capt. Meredith Sarda, the hospital&#8217;s fifth pediatrician since 2006. Before volunteering to come to Balad, she said, she treated mostly rashes and ear infections.

"They&#8217;re out and about playing, doing normal kid activities," Sarda said. "They&#8217;re just in the wrong place at the wrong time. It seems very random. But kids will bounce back from the most devastating injuries."

Nearly three months ago, Tarik stumbled into a fire that was warming a pot of laundry. His legs, arms and face were burned.

For two days, his father raced to Iraqi hospitals, searching for someone who could treat his son. But nobody could help him, said Qazam: The fire had melted away much of Tarik&#8217;s skin and what was left was a mass of red and black damaged flesh.

"He could not move. He couldn&#8217;t even cry," Qazam said. "The only way I was able to know that he was still alive was his tongue."

Eventually Qazam took his son to a nearby American base, and he was then flown by helicopter to the hospital. About 55 percent of Tarik&#8217;s body had second- or third-degree burns, Sarda said.

"His face looked like a baseball mitt," she said.

In a half-dozen surgeries, doctors shaved skin from Tarik&#8217;s stomach, back, upper arms and even his head, then stitched it onto his burned limbs and face. During his second session in the operating room, four surgeons attended to Tarik for 10 hours.

An infection complicated the surgeries, and the surgeons did not have the resources of a specialized burn center, which can use cadaver skin, grow cells, or place burn victims in compression garments to create temporary tissue barriers. The boy&#8217;s burns could only be treated with his own skin.

"We used whatever donor sites we could find on him," said Col. David P. Blake, the director of trauma at the hospital. "And then we reharvested areas again."

For about a month, Qazam was not sure his son would survive.

Last week, Tarik walked for the first time, wheezing with each step as he kicked a soccer ball.

His head and hands were bandaged in gauze. His face looked raw and leathery. But his large brown eyes, flecked with green, grew wide as the nurses made funny faces at him.

"When he starts giggling and laughing, that will be a good day," Sarda said. "You know they are doing well when they start doing normal kid things again."

A little later, a nurse cradled Tarik on her lap, patting him on the back as he watched Tom and Jerry cartoons. The children are the few patients who reside on the ward, and they are showered with attention and toys. But Sarda said she often must try to forget that she&#8217;s treating children, to keep her emotions in check.

"Then when the kid walks around, or does small things like throwing a ball," she said, "I can see them as a kid again."

Sarda said she is impressed by the devotion of some Iraqi parents, especially Qazam, who has kept vigil by his son&#8217;s bedside for 79 straight days, sometimes sleeping in the same cot.

"I don&#8217;t think Tarik would do half these things without his father being here," she said.

Qazam gently sponged his son&#8217;s raw skin and helped change his bandages. He fed Tarik and rotated his legs and arms to keep the skin and tendons from becoming irreversibly stiff, a painful therapy that caused his son to scream and cry.

"Every day is a special day," he said, wearily. "But I was real happy when he walked."

He plans to take Tarik home soon. He hopes to one day see him run.