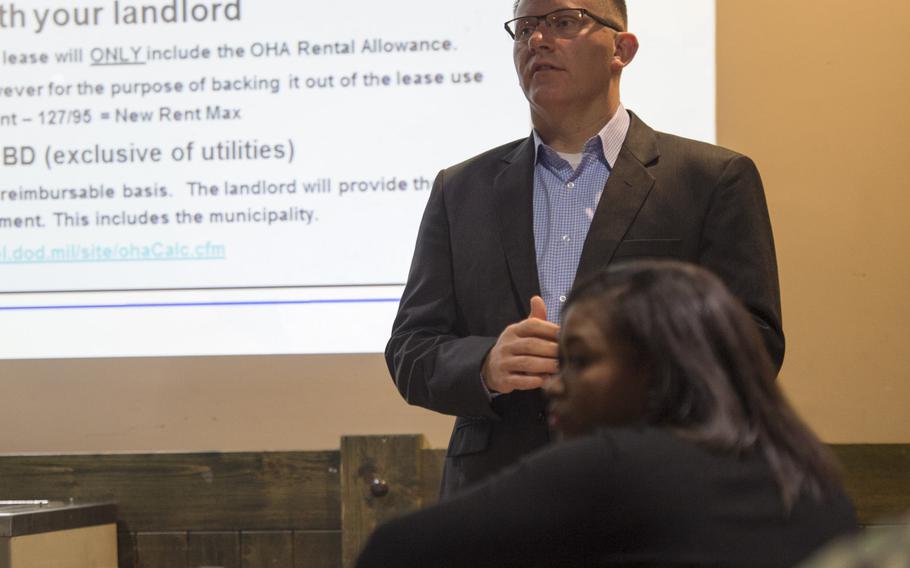 Leslie Jett, the Bahrain Country Allowance Coordinator, takes questions during a town hall meeting at Naval Support Activity Bahrain Tuesday, March 1, 2016. The meeting was to brief U.S. personnel living in Bahrain about allowance changes to meet the rise in utility costs in the country. (Chris Church/Stars and Stripes)

Leslie Jett, the Bahrain Country Allowance Coordinator, takes questions during a town hall meeting at Naval Support Activity Bahrain Tuesday, March 1, 2016. The meeting was to brief U.S. personnel living in Bahrain about allowance changes to meet the rise in utility costs in the country. (Chris Church/Stars and Stripes) Luis Rosario-Febus, Naval Support Activity Bahrain's housing director, takes questions during a town hall meeting on the base Tuesday, March 1, 2016. The town hall meeting was to brief U.S. personnel living in Bahrain about allowance changes to meet the rise in utility costs in the country. (Chris Church/Stars and Stripes) 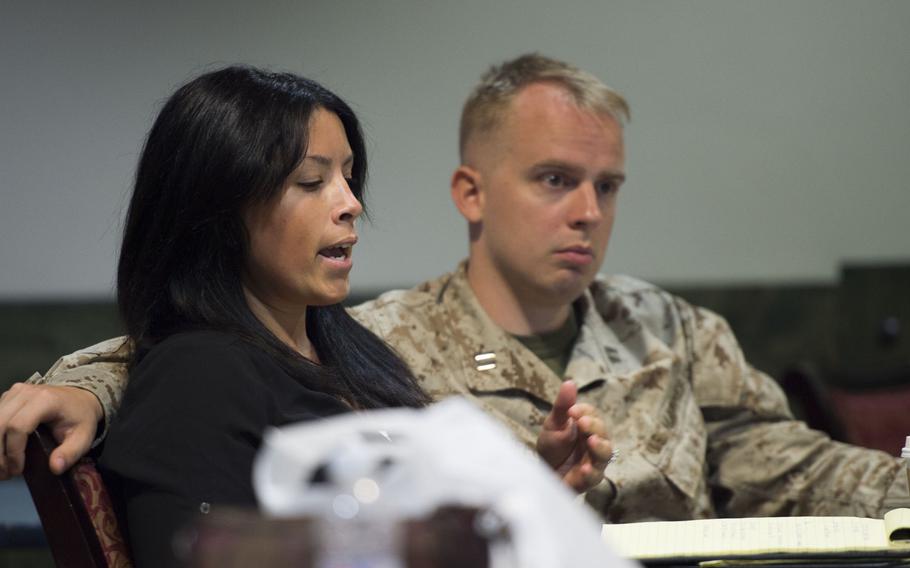 Adriana Clifford, left, asks a question during a town hall meeting with her husband, U.S. Marine Capt. Robert Clifford, at Naval Support Activity Bahrain Tuesday. The meeting was to brief U.S. personnel living in Bahrain about allowance changes to meet the rise in utility costs in the country. (Chris Church/Stars and Stripes)

Bahrain, which like other countries in the Persian Gulf, is suffering from a drop in oil prices that has put pressure on revenue, is cutting subsidies on utilities over the next four years. Utilities costs are expected to about double starting with the March bills, officials said.

“The bottom line is, this utility increase will affect every single person in this room because we all have leases and we all live out in town,” Capt. Cory R. Howes, commander of Naval Support Activity Bahrain, said at a town hall meeting Monday.

“So what that means is, nobody here should ever pay out of pocket, because there will be a mechanism to make sure that the utilities portion of your OHA [overseas housing allowance] goes up should you need it,” Howes said.

That increase will apply to new rental contracts with an effective date of March 1 or existing contracts that are amended, Leslie Jett, Bahrain’s country allowance coordinator, said at a town hall meeting Tuesday.

Until now, rental agreements have included utilities, with a single payment going to the landlord to cover both expenses. If utility costs are lower than estimated, the landlord pockets the difference. If they are higher, the renter pays the difference, but the landlord must provide monthly copies of the utility bills to show the annual allowance was exceeded, Howes said.

Under new and amended rental agreements, military personnel will reimburse landlords for the actual cost of utilities, meaning if the bills are lower than the allowance, servicemembers can pocket the difference, Jett said. The arrangement is similar to how servicemembers pay rent and utilities elsewhere overseas.

Howes said this new arrangement would be incentive for personnel to conserve energy, as it could increase the amount of money they are able to keep.

Under the new rental agreements, personnel would also be responsible for paying the 10 percent municipality or rental tax, Jett said.

Those who already have rental contracts must negotiate an addendum to the existing lease signed by the landlord before they can receive the new allowance. If the landlord refuses to agree to the addendum, personnel must stick with the current arrangement until the lease is up, Jett said. But that may not be such a bad thing.

These personnel will not have to assume responsibility for the municipality tax, and the allowance they receive will likely cover most personnels’ utilities even after the cost doubles, Jett said.

The situation is slightly different for civilians, who receive a Living Quarters Allowance under a State Department program. The base is working with the State Department to conduct a survey in April to assess the impact of the utility prices on LQA and potential rate changes, according to a statement from the Naval Support Activity public affairs office.

Jett said personnel can consult the housing office to get help determining if they are good candidates for changing their current leases.

In the future, to keep up with Bahrain’s changes in utility costs, the Defense Travel Management Office will conduct surveys to help accurately adjust utility allowances, Howes said.

“We don’t have all the answers yet; it’s still a work in progress,” he said. “We’re going to get there, but there will be a transition process with leases, and some fits and spurts that go along with this.”