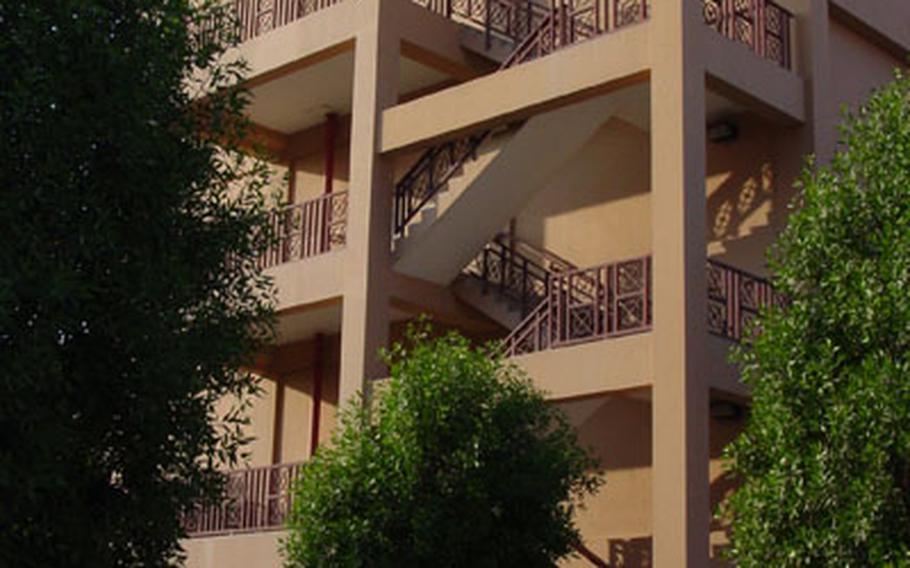 Two women walk from the barracks at U.S. Naval Support Activity Bahrain in Manama that were the site of Monday&#39;s shooting. (Scott Schonauer / S&S)

Two women walk from the barracks at U.S. Naval Support Activity Bahrain in Manama that were the site of Monday&#39;s shooting. (Scott Schonauer / S&S) 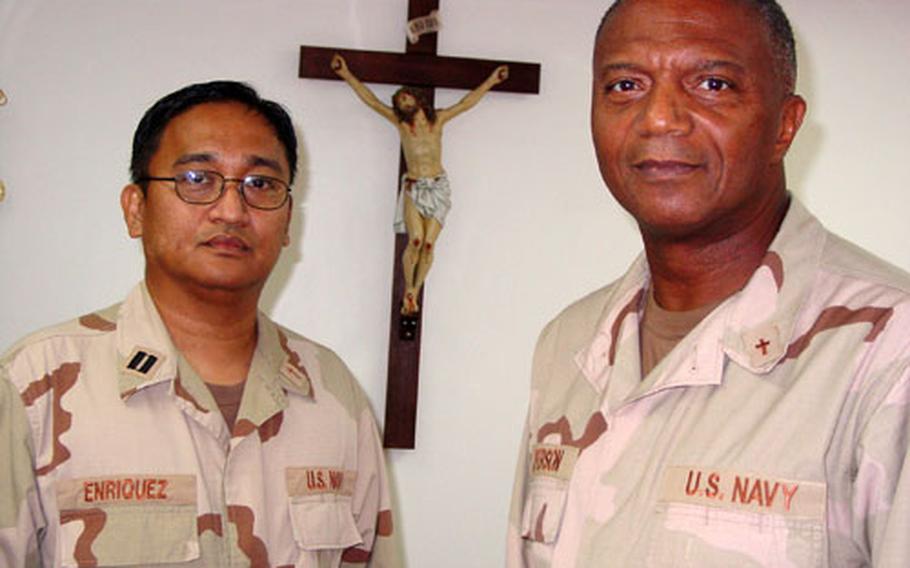 MANAMA, Bahrain &#8212; Two female sailors who were fatally shot by a colleague in their barracks in Bahrain were identified Tuesday by the Pentagon.

The military has not released the name of the third sailor, who allegedly shot both women early Monday morning before turning the gun on himself. He remains in critical condition at a local hospital, the Navy said Tuesday.

Lt. John Gay, a spokesman for the 5th Fleet and U.S. Naval Forces Central Command in Bahrain, said the incident remains under investigation and he was not aware of any charges being filed.

The three served as master-at-arms sailors assigned to the Naval Support Activity Bahrain security forces department. A memorial has been tentatively scheduled for Sunday.

Sources who would only speak on the condition of anonymity have said the male shooter shot his former girlfriend around 5 a.m. and her roommate before shooting himself. It is not yet known which of the two women was the shooter&#8217;s girlfriend.

He had threatened her in the past and was ordered to stay away from her, they said. What exactly led him to go to the barracks is not known.

The Navy has released few details about what happened but acknowledged the three &#8220;were acquainted.&#8221;

As investigators tried to learn what happened, a team of chaplains, crisis counselors and mental health specialists cared for those affected by the tragedy.

Anger and grief has rippled across the heavily protected installation, affecting those who were first on the scene, who knew the sailors involved or who lived just down the hall from the crime scene.

Not surprisingly, the shootings have hit members of the base&#8217;s security forces department, where the three worked, the hardest. As masters-at-arms, the three served as military police.

Counselors have taken considerable care in monitoring how they and those first on the scene are handling their range of emotions. Many are finding it difficult to cope with what happened.

One sailor was so traumatized by what he saw in the barracks that counselors recommended that he not go back there.

Dorothy Benford, director of the Fleet and Family Support Center, said her staff members have met with members of the security unit and the small medical command on base. She said counselors are trying to do anything they can to help, including counseling those who are infuriated by the loss of their friends.

&#8220;And they have a right to be angry because suppose you are a friend of the shooter and someone else is a friend of the victim. They may say things and that&#8217;s going to spark things.&#8221;

Cmdr. Aaron Jefferson, also a chaplain, rushed to the command center to help soon after he heard that something had happened.

He said some people have expressed guilt over what happened and wonder whether they could have done anything to have prevented the shootings.