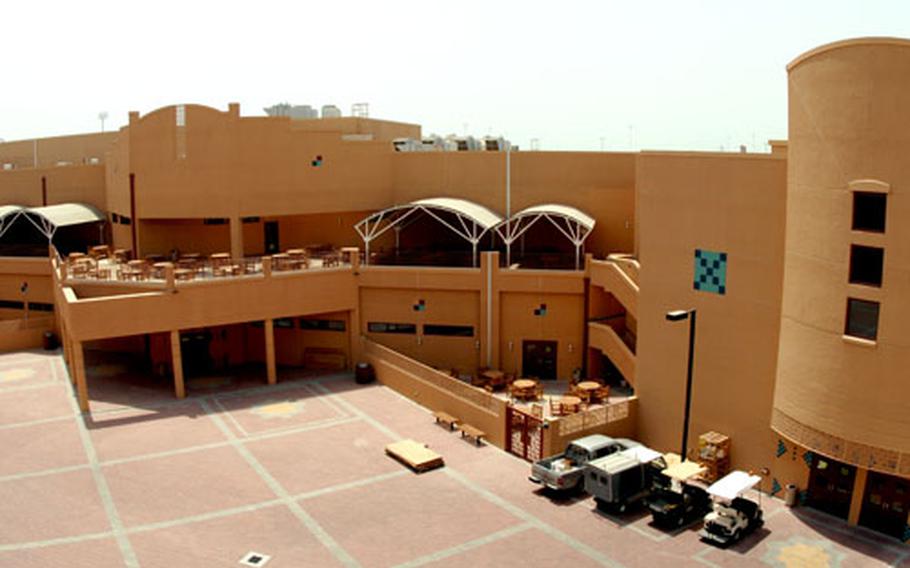 The gym, run by morale, welfare and recreation and featuring a racquetball court, sauna and aerobics and weight rooms, was to open Sunday. The NEX and food court grand opening is slated for Wednesday.

The event will mark both the grand opening and NEX&#8217;s 60th anniversary. Patrons will be eligible for $40,000 in prizes, including the chance to win a 2006 Fat Boy Harley-Davidson motorcycle &#8212; in Navy blue, said Tom Wetrich, the regional development officer at Bahrain.

MWR also will give away prizes, such as a DVD home theater surround sound system, a Sony digital camera, CDs, DVDs and Xbox games, he said. Patrons who have bought anything through MWR, including items from food vendors, between June 8 and 14 can use the receipts to enter the MWR giveaway by writing their names on the backs of the receipts.

The need for a new facility in Bahrain was strong in spite of the 2004 decision to make tours to Bahrain unaccompanied &#8212; meaning dependents don&#8217;t tag along &#8212; because of terror threats, Rear Adm. Robert Cowley, commander of Navy Exchange Service Command, said in a phone interview.

There still are roughly 5,000 servicemembers stationed at the base in the small Middle Eastern country, and troops and ships transit through the area all the time, Wetrich said.

The NEX, food court and gym complex are 188,000 square feet. They will replace existing facilities scattered across the base, said Lt. Cmdr. John Bennett, the base&#8217;s public works officer.

The NEX&#8217;s selling space of 30,000 square feet more than doubles what currently is available, and the first floor will provide shoppers with a primary source of food and groceries, including fresh fruits and vegetables and a full-service deli, said Dan Cougevan, the NEX general manger.

Because threat risks still remain, the building was construction with force protection in mind, Bennett said. For example, there are few windows, so natural lighting is limited.