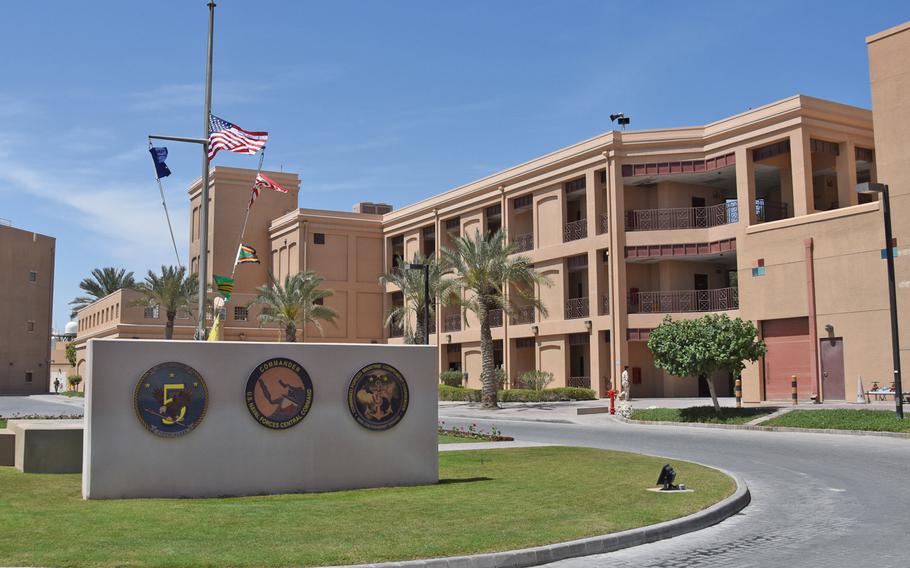 U.S. Naval Forces Central Command roundabout at Naval Support Activity Bahrain in Manama, Bahrain. Servicemembers heading to Bahrain who plan to live off base will now have the opportunity to move into fully furnished flats on month-to-month leases while waiting for their household goods to arrive. (John Benson/U.S. Navy)

MANAMA, Bahrain — Servicemembers heading to Bahrain who plan to live off base will have the opportunity to move into fully furnished flats on month-to-month leases while waiting for their household goods to arrive, the Navy has announced.

About 500 U.S. Defense Department members and their families live in unfurnished apartments or villas in Bahrain that they outfit with their own household goods.

The new option, announced last week, is intended to eliminate the inconvenience some of them experience when their 45 days of temporary lodging allowance, or TLA, has run out before their household goods have arrived.

The situation has meant that some servicemembers and their families might be living in unfurnished apartments sleeping on air mattresses and eating with plastic knives and forks while waiting for their household goods to arrive, said Howes. They could be waiting a couple of weeks, a month or even longer.

Now, servicemembers who ship household goods and plan to live in unfurnished apartments are being advised to contact the personal property office and get an estimated delivery date. If their estimated delivery date is after their temporary housing allowance expiration, the housing office will work to get them moved into furnished apartments on a month-to-month lease.

Once their household goods arrive in Bahrain, they can be stored for 90 days, giving members and their families time to find an unfurnished house for their permanent residence and to align delivery of the households goods with a move-in date.

The Navy says the new arrangement could save money because once servicemembers are moved into the furnished apartments with monthly leases, they can stop their TLA — which covers costly hotel expenses and provides a per diem — and begin their overseas housing allowance, which would likely be about half the cost.

Servicemembers may also be able to take advantage of this new option before they leave Bahrain, the Navy said. If they want to ship their household goods early to avoid a lengthy wait at their new duty station, the housing office can secure a month-to-month lease for the last month or two of a servicemember’s tour.