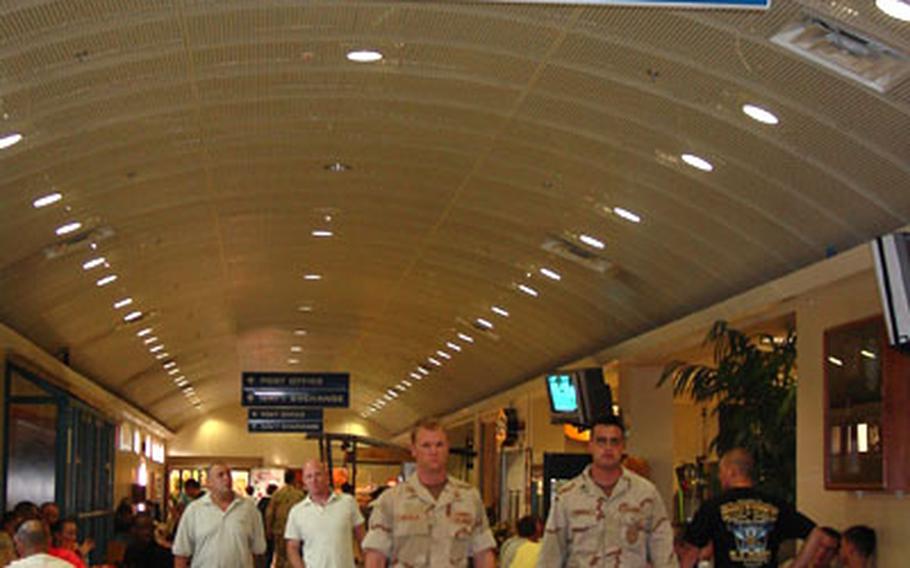 Sailors and those who work at Naval Support Activity Bahrain walk in the Freedom Souq. The U.S. Navy base in Bahrain has doubled the number of sailors over the years and millions have been spent to improve the base. (Scott Schonauer / S&S)

Sailors and those who work at Naval Support Activity Bahrain walk in the Freedom Souq. The U.S. Navy base in Bahrain has doubled the number of sailors over the years and millions have been spent to improve the base. (Scott Schonauer / S&S) 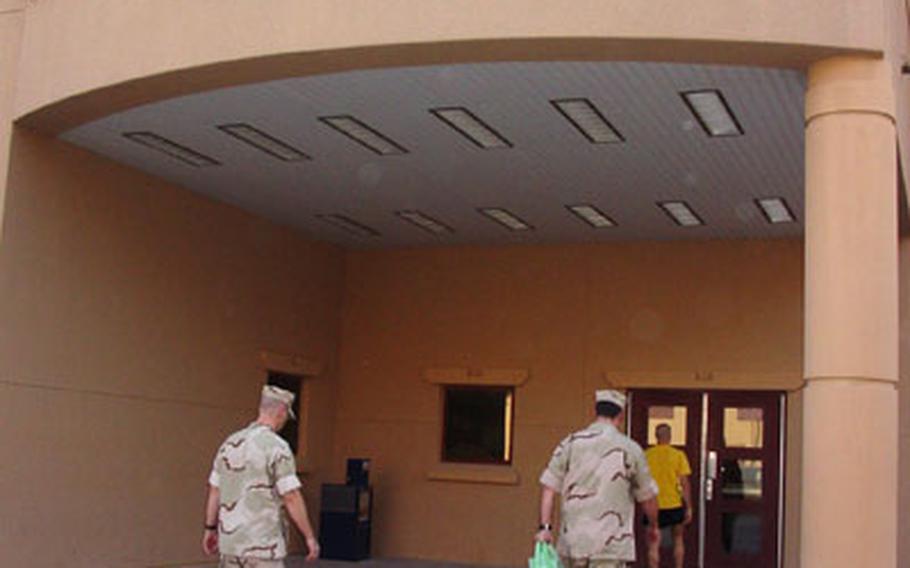 A pair of sailors walk into the U.S. Naval Forces Central Command and U.S. 5th Fleet headquarters at Naval Support Activity Bahrain. The U.S. Navy base in Millions of dollars have been spent to improve the base. (Scott Schonauer / S&S)

This tiny island nation in the Persian Gulf is an oasis in a troubled region.

New high-rise corporate buildings, hotels and luxury apartments shoot up into the sky and overlook emerald waters. Construction cranes are everywhere, and opulent shopping centers are going up at a rapid pace, offering everything from Starbucks to Saks Fifth Avenue.

Property is in such high demand that the country has found a way to reclaim land from the gulf to expand the coast for developers.

While investment companies and bankers jockey for office space in the capital, the Navy operates a base expected to remain among the military&#8217;s most important overseas locations for years to come.

The Pentagon has used the base since assuming control in 1973 from the United Kingdom. But in the past five years, the U.S. quietly has doubled the number of military personnel to 3,600 and poured millions of dollars into improving its buildings and boosting the quality of life for those who work at Naval Support Activity Bahrain. The installation now is home to 80 different commands.

More changes are in the works.

The Navy plans to build a new pier so that its ships don&#8217;t have to share with commercial vessels traveling in and out. American and Bahraini officials also are trying to find a way to connect the pier facilities with the main operating base.

Old buildings are being torn down and new facilities built. The Navy has spent $240 million to spruce up the base from its previous hodgepodge layout of semi-permanent trailers.

What is emerging is a network of tan-colored buildings within walking distance of each other.

Security is extremely tight, with heavily fortified, razor-wire-topped walls surrounding the perimeter. But inside the base&#8217;s fortresslike exterior, it is rather tranquil. Tropical plants and palm trees line brick walkways.

The heart is a recreation and shopping center that opened last year called the Freedom Souq. The building is within walking distance of 5th Fleet&#8217;s offices and includes a food court, fitness center, movie theater, laundry facilities, TV and gaming lounges, Internet Wi-Fi hotspots, a bank and a tour agency.

The new Navy Exchange is twice as large as the old store. It has outsold any Navy Exchange in Europe and is the 11th most profitable in the world, with jewelry being one of its hottest items. It is the only Navy store that includes a small supermarket. There is no separate commissary on base.

&#8220;We have a much greater, much-expanded assortment than the old ship store had,&#8221; said Dan Cougevan, the Navy Exchange&#8217;s general manager in Bahrain.

The demographics on base have also changed. In 2004, the Navy evacuated the families of sailors due to security concerns. Families have since been prohibited from accompanying sailors on their tour in Bahrain.

Much of the growth can be attributed to the need for additional anti-terrorism and security personnel.

Sailors come to Bahrain on yearlong tours. Many work long hours, partly because there is a lot of work to be done, but also because they don&#8217;t have a family or loved one to go home to while on the island.

The departure of families has transformed the base and required base services to alter their approaches, expand some programs and extend hours. The Navy tore down the well-known Oasis club and will build a new outdoor amphitheater nearly four times bigger than the cozy Desert Dome, a canopied concert area near the pool.

Recreation programs became more necessary than ever &#8220;because everybody [is] on unaccompanied tours,&#8221; said Doug Arnett, the Morale, Welfare and Recreation director. &#8220;So a lot of our focus changed from communities and families to supporting the individual sailor.&#8221;

Sailors at E-3 pay grade and below live in modern barracks on base, while the rest of the Americans live in posh homes in town. Unlike the rentals found near bases in Europe, most in Bahrain are fully furnished. Some come with silverware, sheets and big-screen plasma televisions.

&#8220;A lot of people say they&#8217;ve never had this high quality of an apartment or living conditions before,&#8221; Cougevan said. &#8220;You can leave all of your furniture back at home and show up with your suitcase and your toothbrush and you&#8217;re ready to go in really nice surroundings.&#8221;

MANAMA, Bahrain &#8212; The Navy is considering a proposal to allow sailors to resume bringing their families on assignments to Bahrain.

Since 2004, Naval Support Activity Bahrain has been an &#8220;unaccompanied&#8221; tour, which means sailors are prohibited from having families and dependents live with them.

Families are allowed to visit sailors on renewable two-week visas, but the Navy is exploring whether it would make sense to let families join sailors on the assignments, said Lt. Denise Garcia, a spokeswoman for the 5th Fleet and U.S. Naval Forces Central Command.

She confirmed that the proposal had been sent to Washington, but she would not answer additional questions about the request and its specifics because officials have not yet made a decision.

There is no timetable for a decision to be made, she said.

The return of families would mean some changes at the base, but much of the infrastructure is in place. There is a Defense Department school and a Child Development Center, for example.

One question is whether there is enough room for the families.

Since the families were evacuated, the number of sailors and Defense Department employees gradually has grown to more than 3,600, about twice as many as four years ago. On the average military base, family members usually make up about half of the American population. So that would mean the base population might double in size.

Many of the base services are not set up for families or children. Morale, Welfare and Recreation programs are designed mostly for single sailors. The Navy Exchange, for example, doesn&#8217;t sell diapers or baby items.

Before the location became an unaccompanied tour, many sailors liked Bahrain so much that they extended their initial tour.

While many sailors might welcome having their families with them, the move could have its drawbacks. Sailors would lose their family separation pay.

If the base is safe enough for families, the military also might review whether servicemembers should continue to receive danger pay benefits and tax-free status.