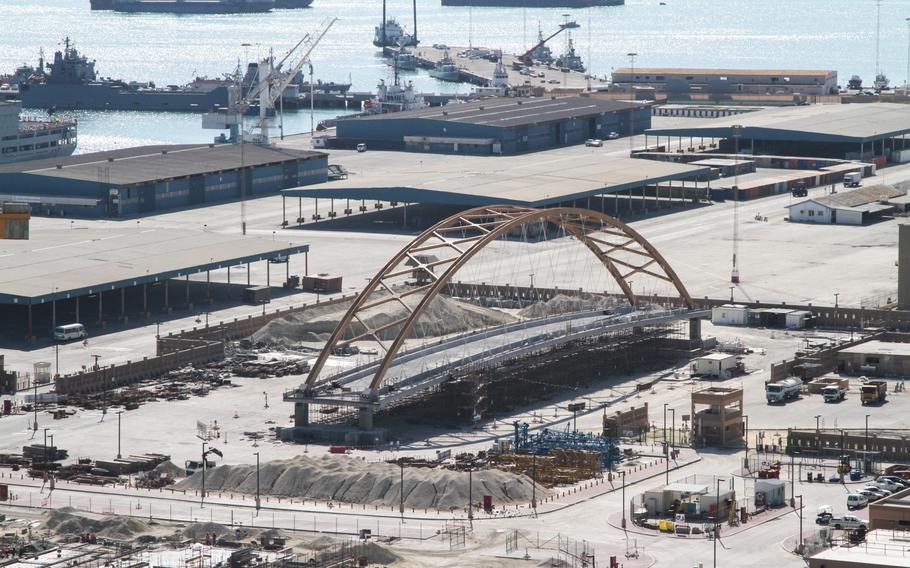 Buy Photo
A tied-arch suspension bridge is being assembled across from Naval Support Activity Bahrain, Dec. 5, 2013. Next month the 2,500-ton bridge is scheduled to be lifted and moved into position over the roadway connecting the base to 77 acres of land the Navy leases along the waterfront. (Hendrick Simoes/Stars and Stripes)

Buy Photo
A tied-arch suspension bridge is being assembled across from Naval Support Activity Bahrain, Dec. 5, 2013. Next month the 2,500-ton bridge is scheduled to be lifted and moved into position over the roadway connecting the base to 77 acres of land the Navy leases along the waterfront. (Hendrick Simoes/Stars and Stripes) 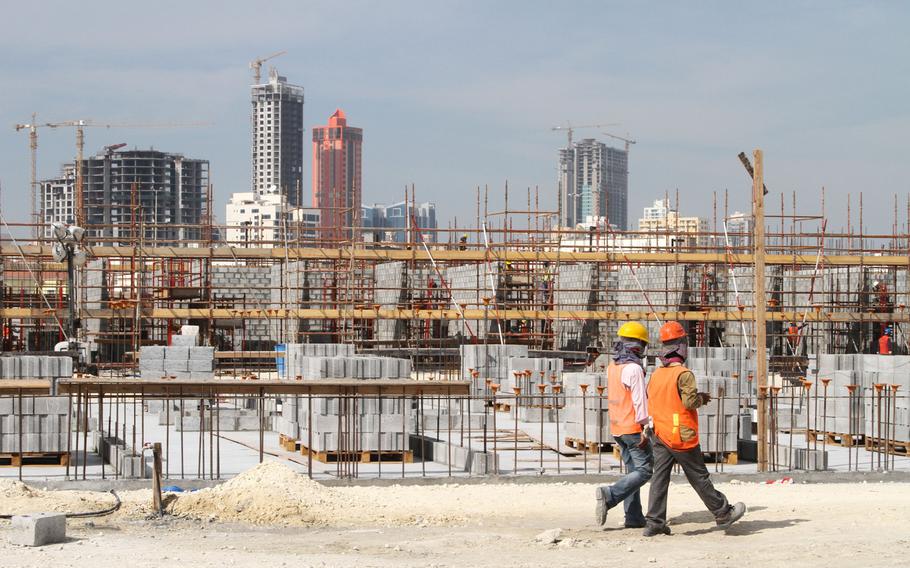 Buy Photo
New Navy barracks are being built on 77 acres of land along Bahrain's waterfront, Dec. 5, 2013. The construction is part of the expansion of Naval Support Activity Bahrain. (Hendrick Simoes/Stars and Stripes)

MANAMA, Bahrain — The $580 million expansion now underway at the U.S. Navy base here, which will nearly double its size, is a clear signal of the Pentagon’s commitment to maintaining a strong presence in the Middle East.

Naval Support Activity Bahrain, home to the U.S. 5th Fleet, has outgrown the capacity of the existing facilities and is expanding to an adjacent 77-acre piece of land along the waterfront. An important milestone in the expansion will be reached next month, when a 400-foot-long tied-arch suspension bridge is lifted into place to join the main base and the new base grounds. The latter area, which is being leased, will provide space for a vehicle maintenance facility, a warehouse, a dining facility and two barracks to house about 1,000 sailors.

There are now nine active projects on the base, including a much-needed four-story administration building on the existing base set to be completed by the spring of 2015.

All of this construction activity is likely to send a strong message to Bahrain and other Gulf Cooperation Council nations that the United States won’t retreat from the Middle East as it pivots toward Asia. Recent news of a possible U.S. agreement with Iran to freeze aspects of its nuclear program has raised concerns among some American allies that the U.S. commitment to the region is waning.

“Although the Department of Defense is facing serious budget constraints, we will continue to prioritize our commitments in the Gulf, while making sure that our military capabilities evolve to meet new threats,” he told a security conference in Bahrain.

Since 2008, the base population has more than doubled, from about 3,000 to 7,000 U.S. personnel. With roughly 80 acres of land on the main base, planners have been stretched to find real estate to meet the expanded unit requirements.

“For every 100 square feet that you need, we can probably offer 60,” said Cmdr. Joel Sensenig, the base public works officer.

Mark Wittrock, an area engineer for the U.S. Army Corps of Engineers in charge of the construction programs in Bahrain, said the new facilities will “combine a lot of the people that have been in the temporary buildings.”

Formerly a container port, the new base area — commonly known as Naval Support Activity 2 — has been under development since 2010. Its piers are already home to the 5th Fleet’s minesweepers, coastal patrol ships and the USS Ponce, the Navy’s first afloat forward staging base.

“NSA-2 is going to be much more of a planned complex,” Sensenig said.

In a visit to Bahrain last month, Chief of Naval Operations Adm. Jonathan Greenert told sailors that the U.S. Navy plans to bring two more Coastal Patrol ships to Bahrain next year. They will be joined in 2018 by the Navy’s new littoral combat ships, with rotational crews. That will require further upgrades to the base.

“Presence matters a great deal ... it’s a deterrent in its own right; it helps you build relationships.” Greenert told Stars and Stripes.

“We’re kind of the executioners of that,” says Wittrock. Some of the planned construction will support the littoral combat ships, particularly a maintenance facility for the ships. Wittrock expects the construction to continue through 2017.

Plans for a larger Navy medical facility on base are in the design phase.

The U.S. Navy initially took over the base from the British Royal Navy in 1971. At the time, Britain was withdrawing from its bases east of the Suez Canal, leaving it to the United States to keep the peace in the volatile region. The base covered just 10 acres then.