Bagram Wi-Fi overhaul will give airmen better ‘FaceTime’ with family 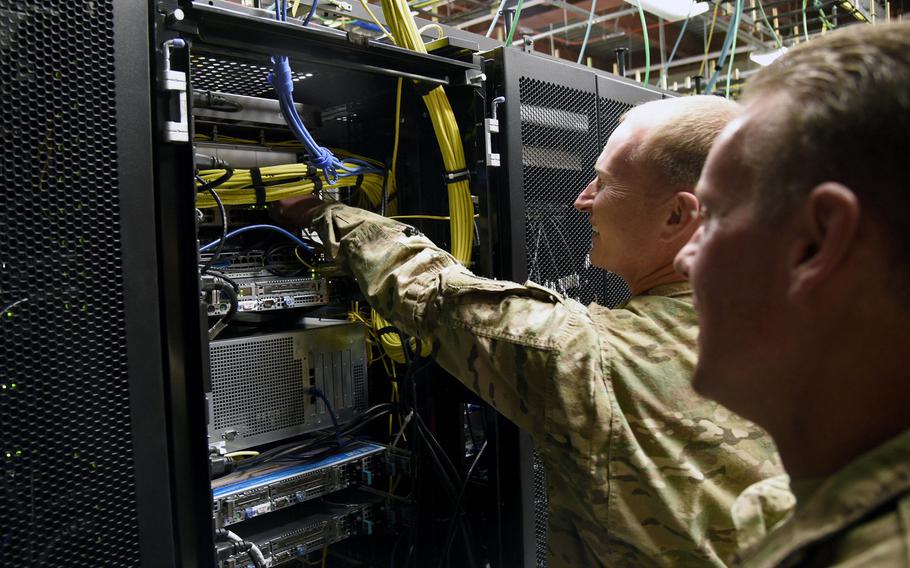 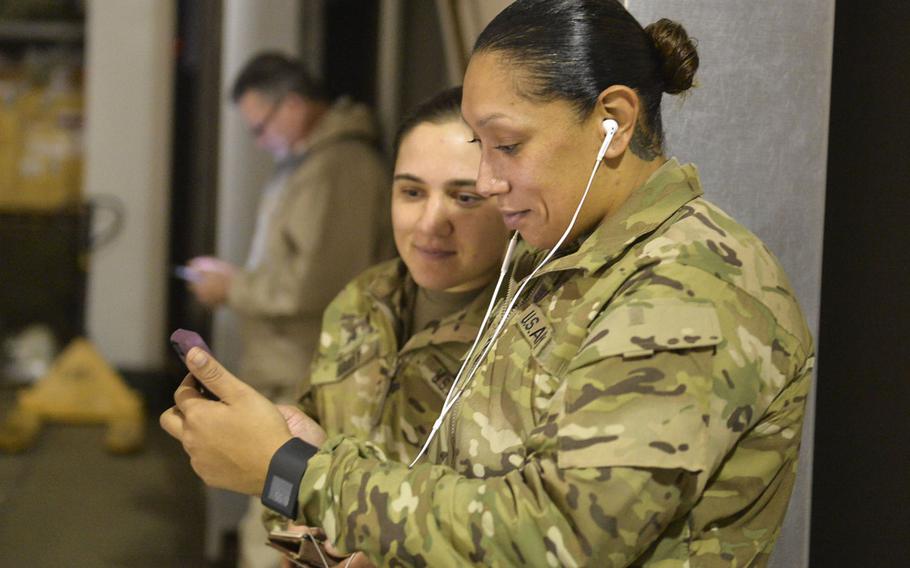 Buy Photo
Sgt. Vanessa Turner chats with her 4-year-old son via a smartphone video calling app at a coalition base at the international airport in Irbil, Iraq, on Sunday, Dec. 25, 2016. (Chad Garland/Stars and Stripes) 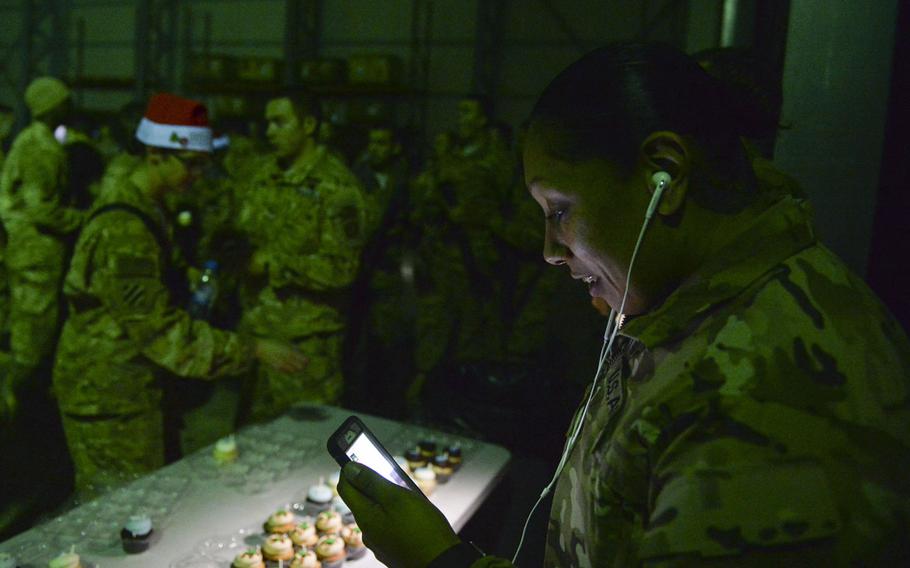 Buy Photo
Sgt. Vanessa Turner chats with her 4-year-old son via a smartphone video calling app at a coalition base at the internaitonal airport in Irbil on Sunday, Dec. 25, 2016. (Chad Garland/Stars and Stripes) 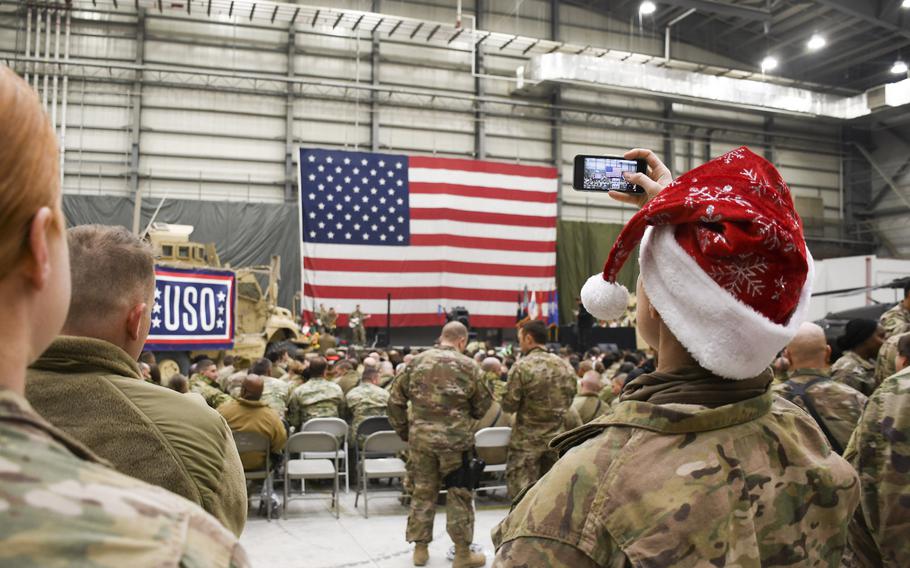 Buy Photo
Tech. Sgt. Tarah White takes a video on her smartphone during a Christmas Eve USO show at Bagram Air Force Base on Sunday, Dec. 24, 2017. (Chad Garland/Stars and Stripes)

BAGRAM AIR FIELD, Afghanistan — The Air Force hopes to boost morale and performance here by improving Wi-Fi access to make it easier for servicemembers to stay in touch with stateside family.

That should allay the concerns of some people back home.

Technological advances in the 17 years since the start of the Afghan War have enabled deployed troops to connect with loved ones like never before, but friends and family in the States occasionally take that for granted — sometimes panicking when they haven’t heard from their deployed loved ones in a day or two.

Afghanistan may be a war zone, but troops here say the reasons for a missed phone call are often the more mundane deployment challenges of long work days or limited internet access. It’s usually nothing to worry about.

“No word is good word,” said Sgt. Seth Killingsworth, one of the Marines responsible for security on the sprawling U.S. base north of Kabul. He had just finished a Christmas morning video chat from his office with his wife in Escondido, Calif., via Apple’s FaceTime app, but he said such connectivity’s not guaranteed. “Just because we have it here, don’t expect that. It might just be letters like back in the day.”

To help ensure airmen get their FaceTime with home, the Air Force increased bandwidth at Bagram by 800 percent in November, to 5-megabit-per-second connection speeds for each device. The speed was bumped up again to 10 megabits per second in December as part of a $1.4 million contract with a local service provider.

That’s a little over half the average connection speed in the United States, according to Akamai Technologies, a Cambridge, Mass.-based content-delivery and cloud-services provider, but it’s fast enough to watch HD quality video on Netflix or make a group call to up to several friends and family members on Skype.

The program is aimed at helping Air Force members and their families care for each other and weather the challenges of military life, such as deployments. It helps keep airmen resilient and ready so they can contribute to a “successful train, advise and assist Afghanistan campaign,” Childs said in a statement.

“These moments of normalcy provide a stress relief to our airmen,” Horn said. “When they return to duty later, they can focus solely on the mission.”

The Wi-Fi project is also set to replace outdated access points in the base’s common areas and 21 dormitories this month and upgrade core infrastructure by May, Horn said.

While the Comprehensive Airman Fitness Wi-Fi is available only to the nearly 1,800 airmen at Bagram assigned to the 455th Air Expeditionary Wing, around 16,000 other U.S. and coalition servicemembers, civilians and cotractors can access free wireless internet service at USO and Morale, Welfare and Recreation lounges, and paid connections elsewhere.

Personal mobile internet modems, along with SIM cards from local providers and prepaid voice and data plans can also be purchased at a shop in the base exchange. Troops regularly line up to check their balances or top-off their plans.

Compared to a deployment to Bagram in 2012 to 2013, staying in touch has gotten “a ton better,” said Tech. Sgt. Tarah White, a communications installer who’s pulled fiber and copper cable as part of the network overhaul on this deployment. On her previous deployment she had to constantly load up on prepaid calling cards. “This time, I haven’t had to use them at all.”

The improved link to home was especially helpful when her mother was in and out of the hospital and she had to help make decisions about her care. She’s also been able to stay in touch with her boyfriend, who’s deployed in Iraq.

“I can text him in the morning, text him good night and he gets it,” White said.

Deployed troops in Iraq have noted better communications than just a few years ago, when costs or limited availability meant shorter and less frequent calls and internet access.

Despite spotty coverage, soldiers in a makeshift camp on the edge of the battle for Mosul last Christmas were able to text their families. At established bases, more bandwidth-intensive activities were possible, such as video calls.

Servicemembers at Bagram who can’t access the speedier Air Force Wi-Fi get by on the hodge-podge of other networks, but connectivity challenges are still common enough that they were the subject of several jokes during a recent Christmas Eve USO show. Troops laughed and some hollered agreement when professional wrestler Michael “The Miz” Mizanin joked that he failed after trying for two hours to load a brief video clip for his fans on Instagram.

Comedian and actor Adam Devine said he was surprised by how slow connection speeds were.

“I kind of always thought the military had like some secret technology that, uh, we weren’t sharing with the general public,” Devine said. “But after being at several bases I know that that is a lie.”

Still, for White, who was standing in the audience and had taken a video to share online later, it doesn’t take much to reassure loved ones with a quick message: “I’m still good.”