U.S. Army engineers clear the remains of wooden B huts at Bagram Airfield, on Sept. 18, 2014. Thousands of such temporary structures are being dismantled as the base is prepared to house a smaller contingent of troops for at least two more years. (Josh Smith/Stars and Stripes)

U.S. Army engineers clear the remains of wooden B huts at Bagram Airfield, on Sept. 18, 2014. Thousands of such temporary structures are being dismantled as the base is prepared to house a smaller contingent of troops for at least two more years. (Josh Smith/Stars and Stripes) 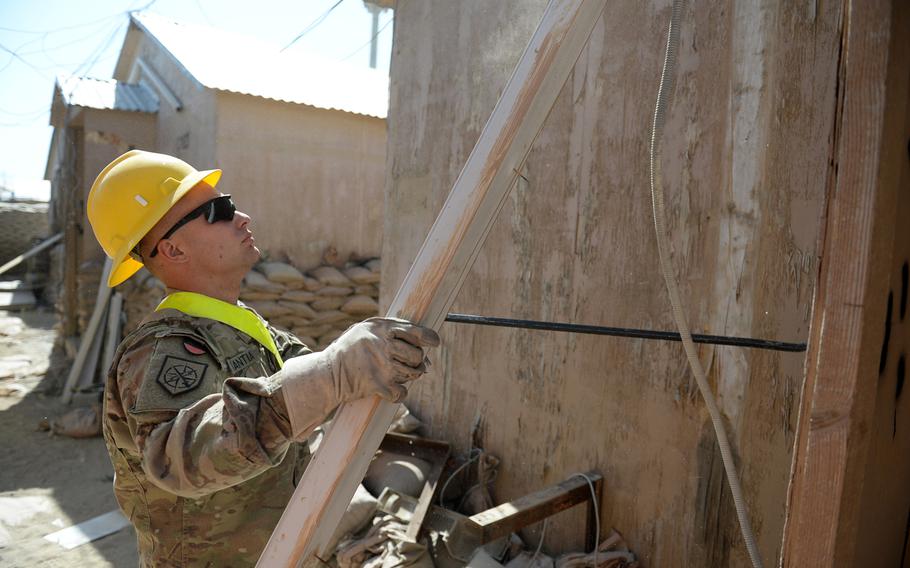 Spc. Jon Mantia uses a crowbar to break down portions of a wooden B hut at Bagram Airfield on Sept. 18, 2014. The structures are stripped of nonwood materials before being crushed by heavy machinery. (Josh Smith/Stars and Stripes) 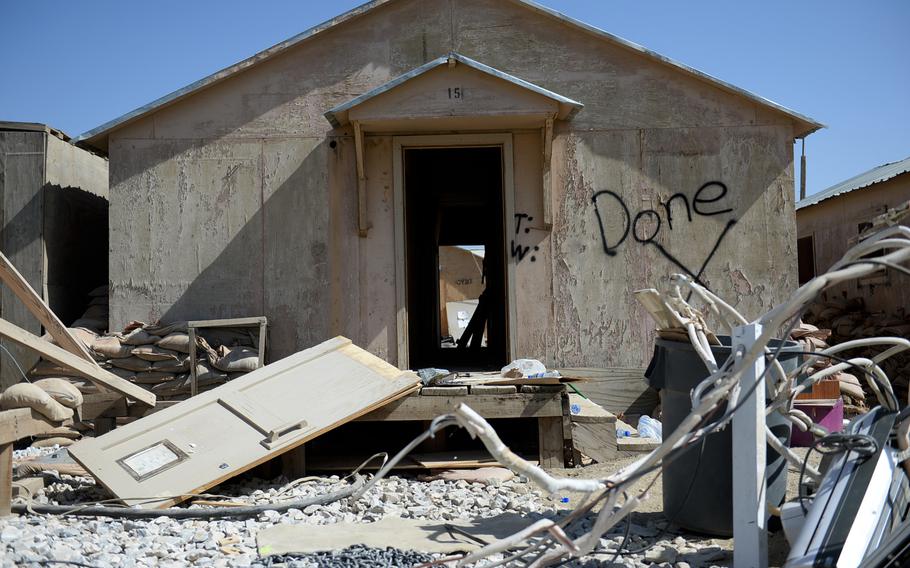 Wooden B huts sit abandoned at Bagram Airfield as engineers strip the buildings before crushing and removing them. While such structures are meant to be temporary, many were used for years at Bagram. (Josh Smith/Stars and Stripes) Wooden B huts sit ready to be dismantled while newer, more permanent buildings can be seen in the background at Bagram Air Field, Afghanistan, on Sept. 18, 2014. Engineers are putting up new buildings to host troops for at least the next 2 years. (Josh Smith/Stars and Stripes) An American flag adorns the wall of a wooden B hut that awaits destruction at Bagram Airfield on Sept. 18, 2014. (Josh Smith/Stars and Stripes) 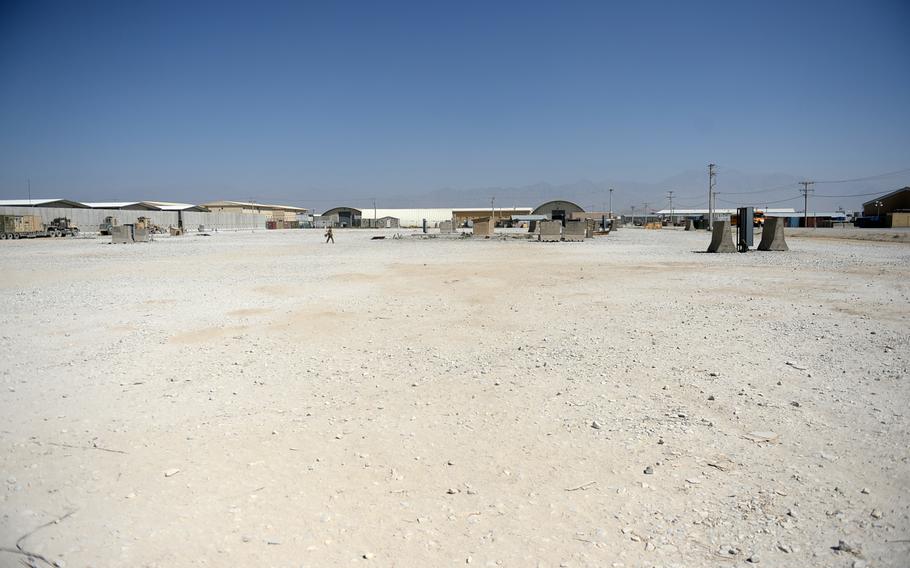 More than 100 temporary wooden buildings stood on this now empty lot on Bagram Airfield in Afghanistan. Engineers say they are destroying 50 to 70 such buildings to prepare the base for a smaller footprint. (Josh Smith/Stars and Stripes) 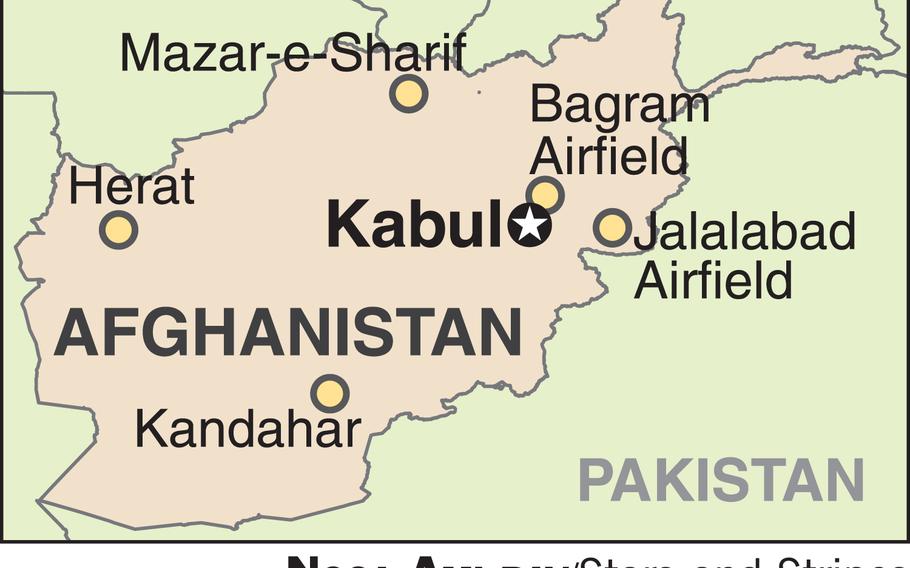 BAGRAM AIR FIELD, Afghanistan — For dust it was, and unto dust it shall return. Acres of land at the NATO coalition’s largest air base are returning to empty dirt lots as troops pack up and tear down.

With all that going on, one might think Bagram Air Field will soon join the hundreds of smaller bases that have been closed or handed over to Afghan forces.

But that won’t be happening any time soon.

The massive smashing spree that has been happening here for the past year merely paves the way for a smaller residual force of trainers, advisers and other troops who will be stationed here until at least the end of 2016.

“Bagram will be among the last places our troops leave,” said U.S. Army Maj. Gen. Stephen Townsend, commander of the International Security Assistance Force’s Regional Command-East, based at Bagram.

The Bilateral Security Agreement with the Afghan government, which was signed Sept. 30, paves the way for about 9,800 American and 2,000-3,000 other international troops to remain in the country after ISAF’s combat mission ends this year.

“This non-combat mission would be centered in the Kabul-Bagram area, with a regional presence in the north, west, south and east,” the White House said in an outline of the plan. That’s a much more condensed presence than the hundreds of bases and combat outposts scattered across the country during the war.

At Bagram, planners have not been shrinking the base’s overall footprint. Instead, engineers have been tearing down and, in some cases, rebuilding structures all over the huge base.

Joint Task Force Trailblazer, a combination of units tasked with much of the retrograde and repositioning work at Bagram, says it has dismantled more than 15,000 square feet of wooden structures, most of which were supposed to be temporary but ended up being used for years as the war dragged on.

New facilities include hardened barracks, dining halls, a bazaar with local shops and recreation facilities with two movie theaters. In many cases the previous facilities were in more temporary structures.

While officials acknowledge it may seem odd that the more permanent buildings have been built as troops depart, they say many of them were planned and contracted for before President Barack Obama announced he was pulling American combat troops from Afghanistan by the end of this year.

All around those new buildings, the old ones are coming down.

In the past year, engineers have torn down and dismantled close to 2,000 wooden B-huts used by tens of thousands of international troops over the past decade. About 1,000 more are also on the chopping block at Bagram.

Soldiers go through the old structures and strip out air-conditioning units and electrical systems. Then the buildings are cut up and smashed. The wood is offered to Afghans, while electronic waste like wiring is disposed of to prevent it from being used to make improvised bombs.

The task force has removed more than three miles of fencing and relocated more than 1,000 concrete barriers, many of which are up to 15 feet tall. Engineers say most of the barriers are being moved around within the perimeter to make more efficient and appropriate use of them as the base’s facilities are reconfigured. That’s on top of deconstructing nearly 800 earth-filled wire-and-fabric blast barriers.

“The pace is picking up now that people have moved out,” said 1st Lt. Joshua Koors of the 961st Engineer Company.

The new NATO-led mission, named Resolute Support, will be to advise and train the Afghan security forces and to conduct counterterrorism operations against al-Qaida.

The headquarters of the NATO-led mission will remain in Kabul, with regional centers at Bagram Air Field, Kandahar, Mazar-e-Sharif and Herat, with some other smaller bases, such as the airfield in Jalalabad, used for advising and assisting the Afghan forces, ISAF officials said.

After Nov. 15, there will be 25 bases around the country that will continue to be used under Resolute Support, said U.S. Army Lt. Col. David Olson, an ISAF spokesman. At the height of ISAF’s operations in 2011 there were as many as 800 bases of all sizes. Additionally, after Nov. 4, ISAF’s regional command system will morph into much smaller command structures.

By the end of next year, the number of troops will be reduced by about half, with most of the remaining forces based in Kabul and at Bagram.

Townsend said most of his forces are already operating in a way that will make the transition to Resolute Support relatively easy.

“We’re the Army, so we plan for everything, but I don’t anticipate that we’ll have to change our posture much,” he said. “In many ways we’re already there.”