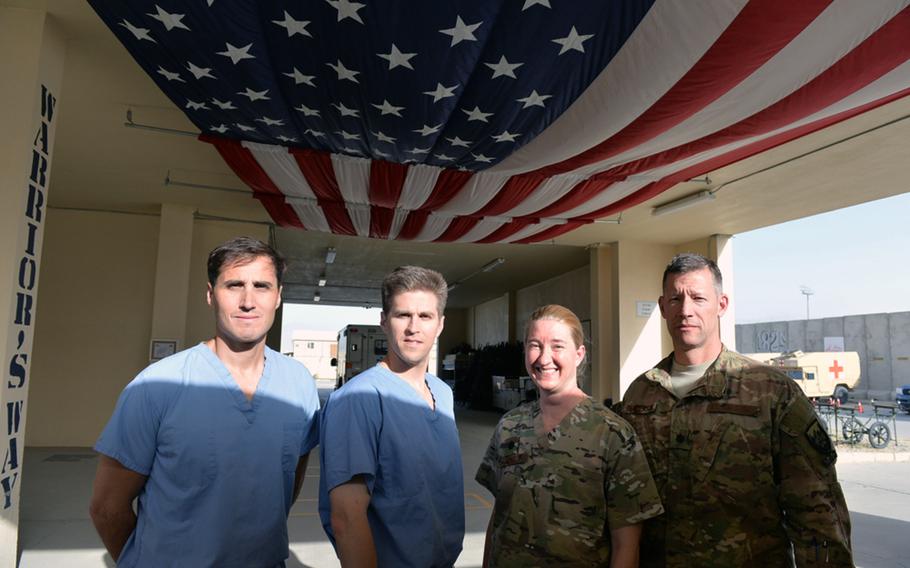 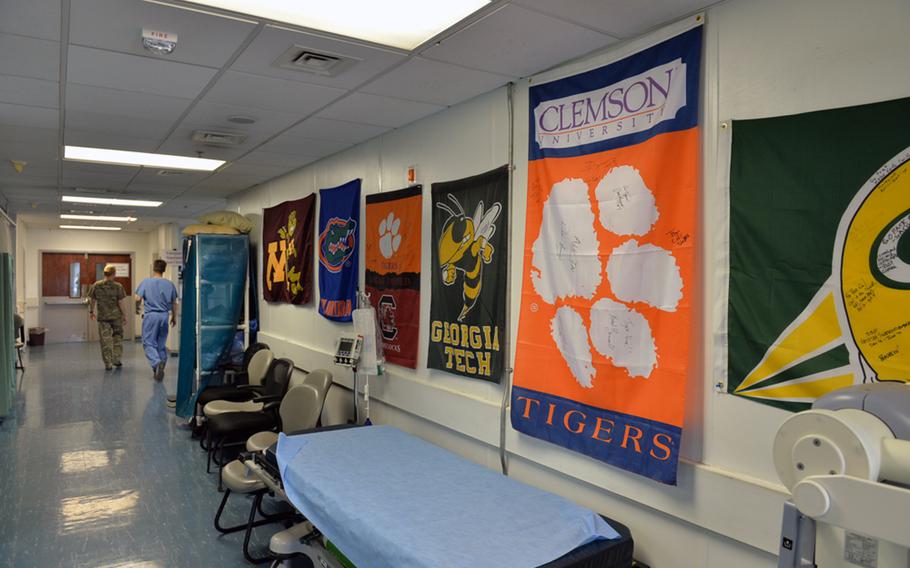 Buy Photo
Flags of U.S. sports teams send in care packages adorn the walls inside Craig Joint Theater Hospital at Bagram Air Field on Friday, June 10, 2016. The hospital was quiet, as demand for its services has decreased with the drawdown in international coalition combat forces since late 2014. (Chad Garland/Stars and Stripes) 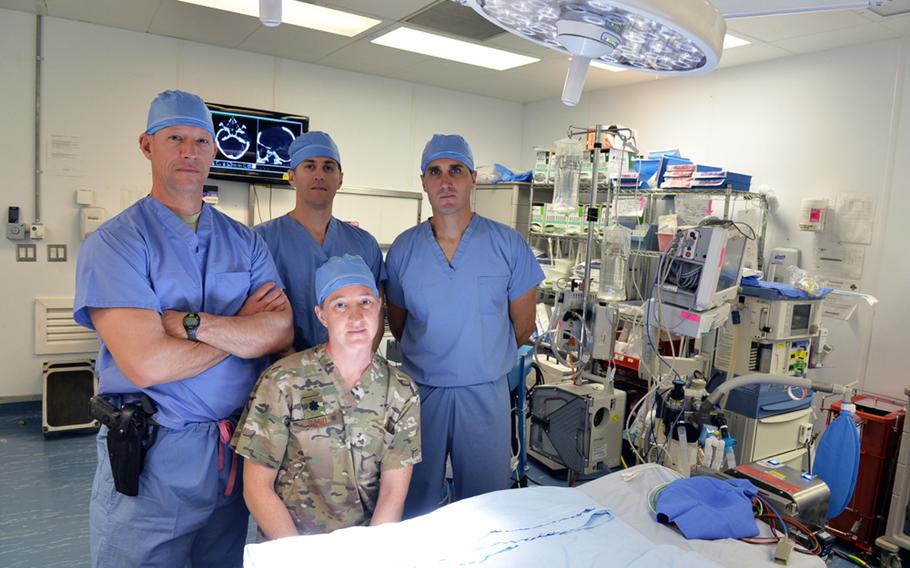 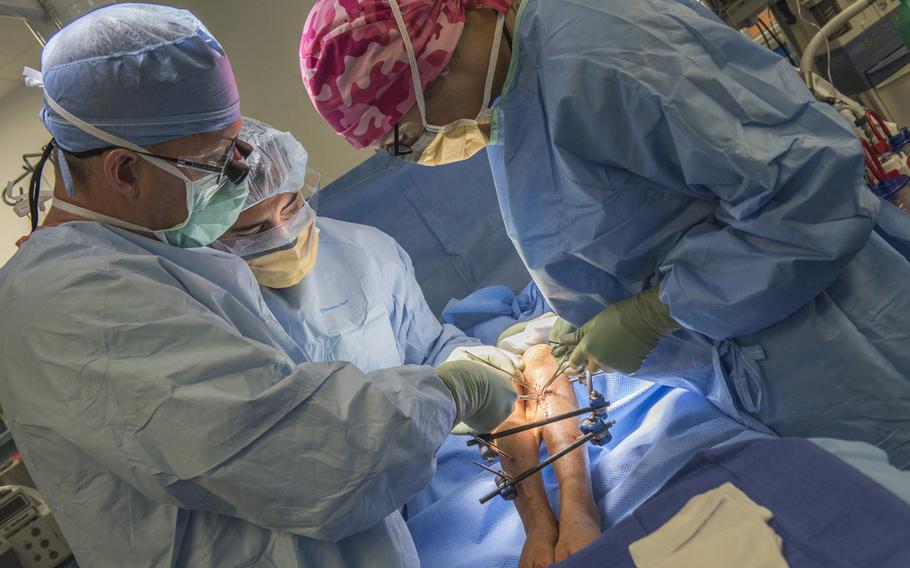 Surgeons work together to save the leg of an Afghan patient, June 10, 2016 at Craig-Joint Theater Hospital, Bagram Airfield, Afghanistan. Multiple surgeons from different specialties have come together in an effort to repair the patient?s leg after suffering a gun-shot wound that threatened to take her leg. (Tyrona Lawson/U.S. Air Force) 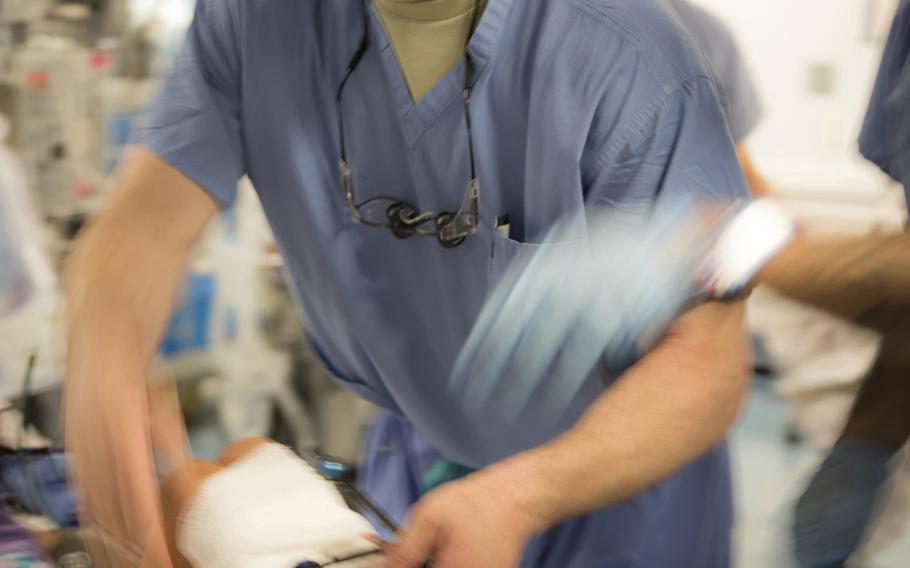 Lt. Col Chance Henderson, 455th Expeditionary Medical Group orthopedic surgeon, wraps gauze around the patients legs after surgery, June 10, 2016, at Craig-Joint Theater Hospital, Bagram Airfield, Afghanistan. Lt. Col. Henderson has performed multiple surgeries on the patient in an effort to save her leg from amputation. The patient was brought to the hospital after suffering from a gun-shot wound. (Tyrona Lawson/U.S. Air Force)

As a consequence, surgeons are keeping their skills sharp by providing more extensive care than some of their patients would typically get at a war zone hospital or even some stateside facilities.

In one such case, involving every one of the surgeons at some point, they’ve performed at least 20 operations to save the leg of a young Afghan girl wounded and orphaned in a firefight between the Taliban and government forces. If the leg had been amputated, the usual course of treatment, the girl would have faced a difficult future as a single woman without a dowry.

“We have all given blood, sweat and tears to this girl in hopes that she will have a future, a bright, happy future,” said Lt. Col. Chance Henderson, the hospital’s orthopedic surgeon.

Because the girl’s family has ties to the Taliban, it is too dangerous to identify her.

Henderson says Craig Joint Theater Hospital is like an Asian version of the Mayo Clinic, with capabilities that are rare even in some U.S. communities. Afghanistan is “the best place in the world to get shot,” he said, because the medical professionals here are ready and waiting to go to work.

The hospital now has 100 fewer personnel on staff than it did in 2012, when the U.S. began drawing down troops, a decrease of about 40 percent, said Air Force Lt. Col. Jamie Rand, the trauma chief.

Its capabilities, however, are much the same, she said, though the hospital is far less busy than during her 2010 deployment, around the height of the U.S. presence in Afghanistan. At that time, there were 10 times as many troops as the current 9,800. Now, civilian contractors — who have taken on some of the duties formerly performed by U.S. servicemembers — outnumber troops nearly three to one. The hospital treats them, too, in certain cases. The facility, however, no longer provides humanitarian care for local civilians not wounded in combat, Rand said.

U.S. casualties in Afghanistan between June 1, 2015, and May 31 this year — 19 killed and 77 wounded, according to a recent Pentagon report — were less than one-half of 1 percent of the 15-year total.

Rand said that the slower pace at the hospital is not just due to the withdrawal of most coalition forces; it’s also a result of the better care the Afghans get from their own medical facilities.

“What is very impressive is how much the Afghan medical community has advanced,” she said. “Their ability to care for their people is better.”

Six years ago, they had few places to go besides Bagram’s hospital. Today, they spend little time under her care, if any.

She recently treated an Afghan soldier with a gunshot wound to the belly, then released him into the Afghan health care system.

Still, Rand said, Craig’s medical capabilities are invaluable here, and the surgeons need to be “where the fight is.”

What they struggle with now is the increase in boredom and anxiety.

They kill time by practicing their dart game or working out. Henderson, a former rodeo cowboy, even has a roping dummy. But there’s little they can do to maintain their surgical prowess without incoming patients, and they worry about losing their edge.

The workload depends largely on the tempo of operations against the Taliban. The fact that it’s not busy on a given day or for a long stretch of days doesn’t mean an influx of wounded won’t pour in at a moment’s notice, demanding every bit of their medical know-how.

Though the doctors here may find less call for their services on a regular basis, the kinds of injuries they do treat provide them with the challenges they need to keep their skills sharp. Elective brain surgery on a female military contractor, for example.

Parry had done an emergency operation to stop a bleed in the woman’s skull. That’s typically where his job would have ended, and he would have left follow-up operations to doctors elsewhere. Not wanting to let a rare chance to scrub-in slip by, however, he got clearance to perform a second, less urgent procedure to address the underlying issue.

Earlier this month, Parry also collaborated with Air Force Lt. Col. Stephen Maturo, a pediatric ear, nose and throat specialist, on the removal of a 7.62 mm AK-47 round from an Afghan soldier’s sinus cavity.

It wasn’t a fresh wound, and it wasn’t life-threatening — though by a razor-thin margin.

“That’s the downtown of neurovascular structure,” Parry said, pointing to a spot on a CT scan of the man’s head millimeters from the inch-long bullet’s tip. The man was complaining of headaches, but had the round gone any deeper, he’d have been dead.

Even a small number of cases like these reassure the doctors here that they’re needed.

“If we save one (patient’s) life, we’re all happy,” Maturo said.

Ironically, back home they would have many more opportunities to use their skills, the surgeons said, either in their day jobs or in off-duty rotations at busy local emergency rooms. Rand, who teaches in an Air Force trauma medicine refresher program at St. Louis University Hospital in Missouri, said she gets plenty of practice. America’s gateway to the West “is as violent as Afghanistan used to be.”

The doctors express optimism that the Afghan girl will keep her leg, though they’re reluctant to say she’s out of the woods yet.