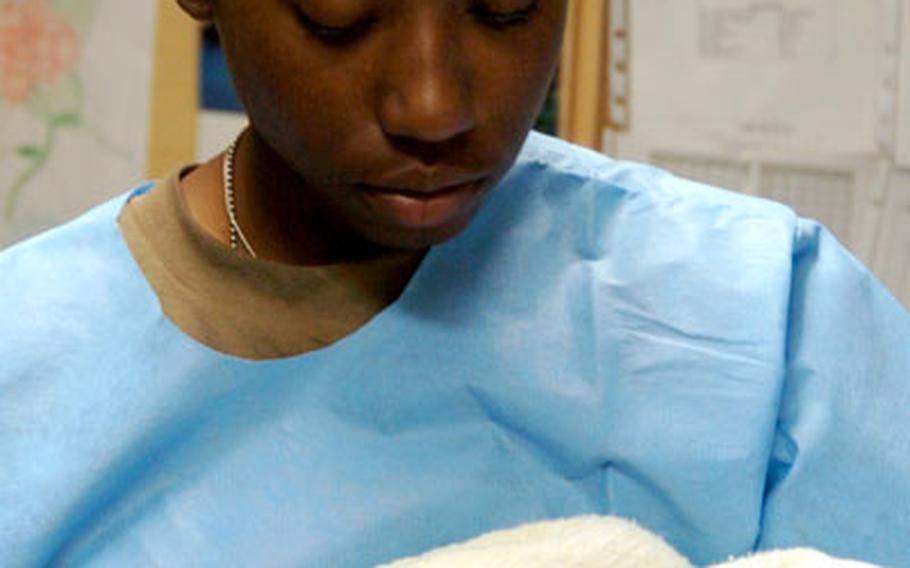 Pfc. Daniella Underwood holds 3-month-old Zarghona, who was brought to the U.S. military hospital on Bagram Air Base, Afghanistan, when she was 2 days old with third-degree burns on her head and face. (Derrick Witherspoon / 7th Army Reserve Command)

BAGRAM AIR BASE, Afghanistan &#8212; She had been born only the day before, but when her father brought her to the Americans, she was about to die.

She was called Zarghona, he said of the small bundle he handed over to the staff of the 249th General Hospital. He didn&#8217;t need to say what was wrong with her.

The newborn&#8217;s head and face had been burned horribly. It had happened when her mother, who also was burned, lit a lamp while holding Zarghona in her arms. The lamp exploded, as they often do in Afghanistan, where electricity is rare and lamps and stoves are fueled with kerosene and gasoline.

Despite her critical, disfiguring injuries, and through two virulent infections, Zarghona lived. The mother&#8217;s status is unknown.

Now nearly 3 months old and just under 11 pounds, Zarghona has spent all but the first two days of her short, bleak life at the hospital. And her future is even more uncertain than that of most girls born in Afghanistan.

&#8220;But the long-term effects of these injuries will require several, multiple procedures throughout the course of her life. A prosthetic nose, for example, is likely in her future.&#8221;

Zarghona&#8217;s face is scarred and incomplete, her tiny infant&#8217;s nose seared away, her eyelids unable to shut over her dark brown eyes. Under her little white hat, bandages and dressings cover her damaged scalp.

Zarghona has been treated, fed, burped, bathed and changed all these weeks by the hospital staff. &#8220;She does seem to know her providers by the sound of their voices, their touch, smell and sight,&#8221; Doyle said.

A half-dozen staffers usually provide most of her daily care. &#8220;But everyone who comes into contact with her wants to take care of her,&#8221; he said.

Her father visits when he can, usually weekends, the staff said.

When she arrived at the hospital &#8212; a plywood building in a gravel parking lot &#8212; Zarghona had second- and third-degree burns on 15 percent of her very small body, almost all of that to her face and head.

She didn&#8217;t die, Doyle said, as other burned babies brought to the hospital have, probably because her lungs had not been significantly injured.

&#8220;She did have a couple of severe infections, which were very life-threatening during the course of her treatment. She was on oxygen. But with supportive measures, she lived through that,&#8221; Doyle said.

Doctors have tried to minimize her pain. During painful cleaning or dressing changes, the baby was provided with small doses of morphine, but even those don&#8217;t seem to be necessary anymore, Doyle said.

The hospital&#8217;s first plastic surgeon &#8212; from Walter Reed Army Medical Center, who has been at Bagram for about two weeks &#8212; is planning to perform surgery soon on Zarghona so that she can close her eyes.

That surgery is considered essential, and in the United States is often done within a week of the burn injury to lessen the risk of corneal ulcers and other eye problems.

The surgery awaits the U.S. mail, Doyle said, and the delivery of a pair of loupes, the magnifying lenses surgeons wear. In the meantime, the staff tries to keep Zarghona&#8217;s eyes protected with ointment.

Hospital staffers have been working toward sending Zarghona to a U.S. burn center for more sophisticated care, including the many surgeries she is expected to need. They&#8217;ve contacted the Shriners Hospital in Boston, which has a pediatric burn unit that provides free acute and reconstructive and rehabilitative care to children.

Shriners Hospital officials said there was no one available to comment on the likelihood that they would accept Zarghona&#8217;s case.

Rowan has taken on the task of getting together the necessary paperwork for permission to transfer the baby to the U.S., needed from both the U.S. and Afghan governments.

Many patients are burn victims

They come from exploding lamps and stoves that are fueled by kerosene and gasoline, land mines and improvised explosive devices.

In just four days in March, for example, medics evacuated a 6-year-old girl, a 4-year-old boy and a 10-year-old girl who all had suffered burns over much of their bodies, according to a Defense Department news release. How they were burned was not known, the press release said.

An International Red Cross study in Afghanistan between 1996 and 2000 determined that 63 percent of 388 burn patients admitted to one Red Cross hospital there were children, with a median age of 8 years old. Fire caused 37 percent of the burns; scalding caused 44 percent. The mortality rate was 16 percent. Of those with burns covering more than 45 percent of their bodies, there were no survivors, the study said.

In the United States, where children also are among the most likely age group to suffer burns, the survival rate is much higher, due in large part to early use of skin grafts, which became standard in the 1980s and reduced infection rates. Now in the U.S., victims with burns covering 70 percent of their body have a 40 percent chance of survival, according to experts at Harborview Medical Center in Seattle.

The U.S. hospital is one of three on the base whose patients are primarily Afghans. El Salam Egyptian Military Hospital, which sees about 300 patients a day and conducts some 50 surgeries a week, has been operating there since 2002. South Korea operates a hospital as well, seeing about 5,000 patients each month, treating men and women on alternate days, seven days a week. Those hospitals also see a significant number of burn patients.