Bagram hospital staff's goal is 'to leave a legacy, not a vacuum' 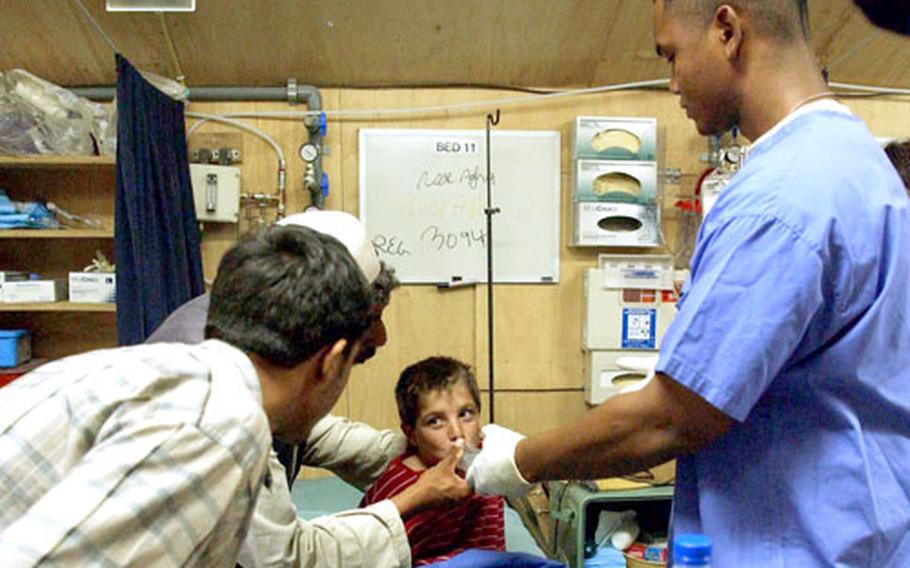 With the help of an interpreter, Sgt. Matthew Younger, right, a respiratory therapist with the 14th Combat Support Hospitalm, shows an Afghan boy and his father how to use an inhalator. (Michael Abrams / S&S) 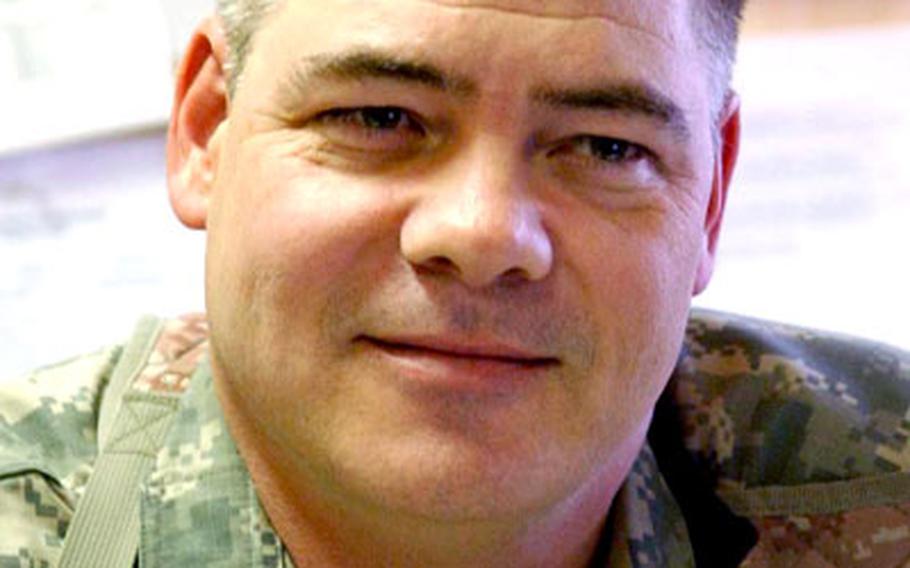 BAGRAM, Afghanistan &#8212; Four small Afghans fill four small beds in the intensive care unit. The smallest of all is Yasin, born two days ago, three weeks before he was due. His mother is across the base at the Egyptian hospital, his father is trying to scrape out a living as a day laborer. His grandmother watches Lt. Col. Mark Thompson watch over him.

She probably isn&#8217;t aware of it, but part of the reason her grandson is alive is because of surfectant, the substance that helps newborns&#8217; lungs expand but which preemies are born without. Thompson had it flown in from Germany.

Thompson is a neonatalogist, a specialist in newborn medicine and not the usual kind of doctor expected to be found at a hospital built to serve the needs of U.S. soldiers in a combat zone.

But the 14th Combat Support Hospital at Bagram air base, since its members arrived in January, has by design treated hundreds of Afghans. They and previous hospital staff that have rotated in and out since 2001 must have won thousands of Afghan hearts by tending to their bodies.

The hospital at Bagram has grown repeatedly since the U.S. military, in its first response to the Sept. 11, 2001-attacks in New York City, Pennsylvania and Arlington, Va., began its Afghanistan campaign to root out the Taliban and al-Qaida.

The hospital grew and moved into tents in 2002, then before the year was up into the rambling plywood building with 36 beds, which is called &#8220;the barn&#8221; by staffers. And by November, it&#8217;s hoped, they&#8217;ll move again into a larger brick and mortar building with 44 beds and state-of-the-art equipment. The new hospital cost $19 million; the equipment, another $9 million, said Col. Jeffrey Haun, hospital commander; which were paid for with U.S. Central Command contingency funds.

In a war on terror that costs more than $6 billion a month, and in a country with enormous needs, the new hospital funding may seem infinitesimal. But doctors there say it represents a part of the continuing commitment the U.S. has to Afghanistan. &#8220;Our goal is to leave a legacy, not a vacuum,&#8221; said Frank.

The bulk of hospital inpatients are Afghans. Of nearly 700 inpatients since February, 60 to 70 percent have been Afghans, Franks said, with a variety of ailments: burns, broken bones, paralysis, malaria. Many are children. Recently the hospital sent out a team to bring back some children and staff of a school bombed by the Taliban.

&#8220;The shock of dealing with children who are missing limbs &#8212; it&#8217;s not standard fare for us or any doctors,&#8221; said Frank, whose last post was El Paso and whose last mission was to set up a clinic in the New Orleans Convention Center after Hurricane Katrina.

&#8220;I think all the medical staff is initially challenged. You never really get desensitized to the injuries of children,&#8221; he said.

Most of the hospital&#8217;s out-patients, more than 16,000 since February, have been U.S. and other coalition soldiers.

Frank said U.S. soldier casualties in the past few months have increased, though most of the fighting has been in the south, where soldiers go first to a Kandahar military hospital before being sent to Germany or the U.S.

Frank said seeing the maimed children is the hardest part for doctors who&#8217;ve not chosen pediatrics. But seeing badly wounded or killed soldiers is terrible, too.