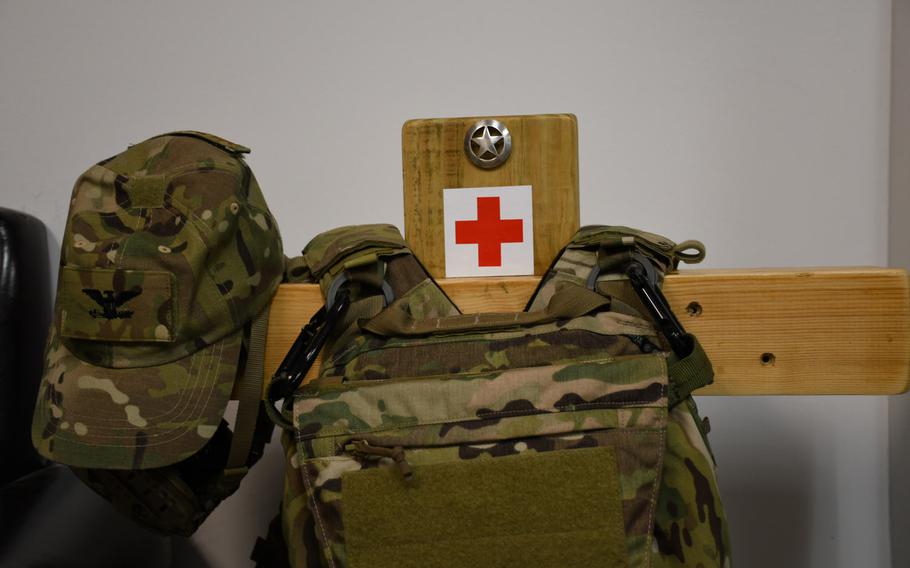 Pictured here on Monday, Jan. 29, 2018, equipment belonging to Col. Walter "Sparky" Matthews hangs on a post decorated with one of the small Texas Ranger badges he hands out to staff at the hospital at Bagram Air Field, Afghanistan. (Chad Garland/Stars and Stripes)

Pictured here on Monday, Jan. 29, 2018, equipment belonging to Col. Walter "Sparky" Matthews hangs on a post decorated with one of the small Texas Ranger badges he hands out to staff at the hospital at Bagram Air Field, Afghanistan. (Chad Garland/Stars and Stripes) 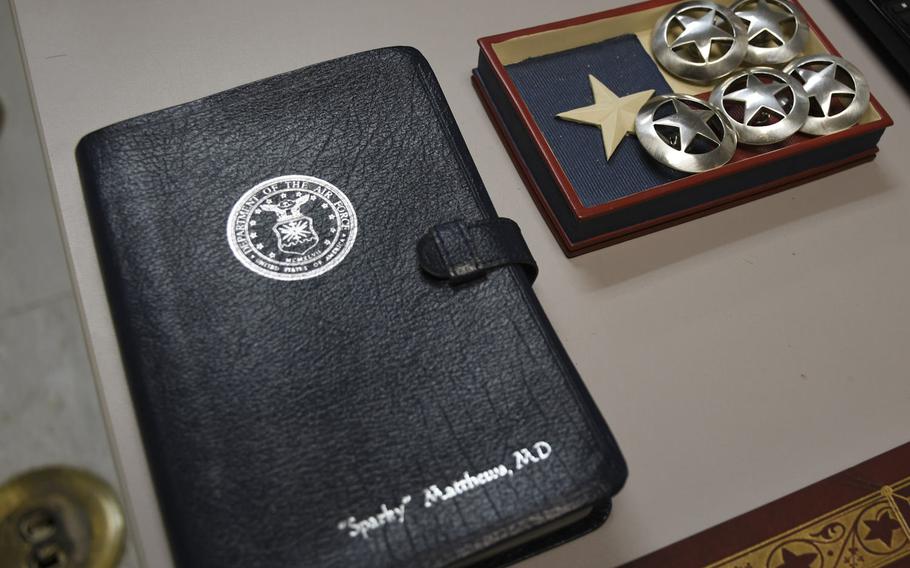 Pictured here on Monday, Jan. 29, 2018, on Col. Walter "Sparky" Matthews' desk, is his notebook and a tray of small Texas Ranger-like badges the head of the Craig Joint Theater Hospital at Bagram Air Field hands out to staff for their good work. (Chad Garland/Stars and Stripes) Pictured here on Monday, Jan. 29, 2018, is the Craig Joint Theater Hospital ambulance bay, known as "Warrior's Way," where wounded U.S., coalition and Afghan forces pass under the flag to enter the hospital's trauma ward after being medically evacuated from the battlefield. (Chad Garland/Stars and Stripes)

BAGRAM AIR FIELD, Afghanistan — Medical officials in Afghanistan are preparing for more casualties as the U.S. military sends more troops close to the front lines to advise government forces in their fight against militants and terrorists.

The Craig Joint Theater Hospital here has had what officials believe to be a record success rate at keeping casualties alive — many of them Afghans wounded in operations with U.S. forces — which officials said helps boost battlefield confidence. Those lifesaving capabilities will likely see even greater demand as the U.S. steps up operations against the Taliban and the Islamic State here.

The number of Americans wounded in action in Afghanistan rose by more than 25 percent last year, compared with each of the previous two years, according to an analysis of Pentagon data. Officials have said U.S. forces will be at greater risk under the Trump administration’s more aggressive strategy in the region, which has already increased troop levels, loosened rules of engagement and sharply increased airstrikes.

At Bagram, officials said they were consulting the U.S. Central Command about adding staff to prepare for an increase in operations tempo and casualties.

“The more combat you have, the more casualties you’re likely to have,” said Col. Walter M. “Sparky” Matthews, head of the 455th Expeditionary Medical Group. He oversees the military’s medical task force responsible for non-special-operations medical teams here. “It would be unwise for us not to plan for an increase in casualty numbers.”

The medical system is ready and able to treat more wounded than it has been, even without added staff, Matthews said, because the number of casualties is normally pretty low. The Bagram hospital was quiet on a recent afternoon, and its emergency and operating rooms were empty. A few Afghans in civilian attire and bandages sat in a waiting area.

“It would also be unwise for us to assume that the low numbers of U.S. casualties that we’ve had in the recent past would remain that way,” he said. “We’re certain that increase is going to come. We just don’t know to what degree.”

It’s likely that as casualties rise, the Afghans will continue to bear the brunt of the losses, and officials here said they’re working both to shore up Afghan medical capabilities and to treat those they can in the coalition’s system.

A flight surgeon descended from a Texas Ranger who rode out of Abilene in the 1860s, Matthews exudes a kind of cowboy charm to go with the hat, lariat and spurs that hang on his office wall. He wears a sidearm strapped to his hip.

Instead of challenge coins, his staff earn what look like miniature Texas Ranger stars for good work, and they’re encouraged to wear the coveted symbols on their ID badge pulls. One of their achievements the Austin native likes to tout is a more than 99 percent survival rate. That’s up from an earlier 98 percent, officials said.

“We’re super proud of that,” Matthews said, comparing it with survival rates as low as 25 percent in conflicts over the past 150 years.

A 1 percent bump — 1.27 percent to be exact — may seem small, but for a hospital that saw more than 450 trauma cases in 2017, it’s the difference between life and death for about five patients. That’s equal to nearly half the 11 U.S. combat deaths here last year.

Officials would not say how many patients were Afghan troops, but there were just 113 U.S. casualties in fighting in the country last year.

The motto on rounds here is “no one dies today,” and as they’ve come close to achieving that goal, deaths have become so rare that Matthews said it’s unnerving when someone does not survive.

Lt. Col. Jared Clay, the hospital’s chief medical officer and the overseer of forward medical facilities in Afghanistan, is less enthusiastic about the survival rates. He said it doesn’t necessarily give a full picture of the situation.

Advancements in vehicle and body armor are preventing many grave injuries, he said. The wider use of tourniquets and better front-line first aid are keeping serious wounds from becoming fatal.

Still, some of the injured die before getting to the hospital. And some patients couldn’t be saved even if they were at a medical facility when the injury happened, Clay said. Brain injuries, such as a gunshot to the head, are the leading cause of such unpreventable deaths.

It’s rare that those who can be saved aren’t, he said.

“Once they roll under that flag, there’s a 99 percent chance they will survive,” Clay said, referring to a large U.S. flag draped over the ambulance bay near the flight line. Known as “Warrior’s Way,” it’s where the wounded enter the hospital.

A capable medical system standing by to give lifesaving aid reassures U.S., coalition and, especially, the Afghan forces who go on operations alongside them, the officials said.

Clay has treated government troops here who were wounded while exhibiting “extreme bravery,” such as going first to clear a room or leading the charge to take a well-defended objective.

Troops have more confidence when they know their chances of survival are strong, Matthews said.

“We don’t want them to have to think about risking their life on the battlefield. We want them to go out there and risk (the enemy’s life) and know that theirs is safe,” he said.

Besides 11 combat fatalities here last year, 102 more U.S. troops survived being wounded in action, according to Pentagon data. That makes for a fatality rate of about 10 percent — well below the rates in several earlier years and about half the rate during the Vietnam War.

Afghan forces, however, are at far greater risk of death than Americans have been in decades. The fatality rate in 2016 — the last full year for which data were available — was more than 36 percent. It was on track for a similar rate early last year.

The government has suppressed the full security forces casualty data from 2017.

Afghan military medical facilities are staffed with Western-educated surgeons and experienced doctors, officials at Bagram said, but they lack some of the pricey, high-tech equipment common in U.S. facilities, and they aren’t yet as capable of treating the seriously wounded.

The growing air force, which is increasingly taking on missions to evacuate casualties, still struggles to get them off the battlefield fast enough.

Coalition advisory teams are mentoring local medical teams, helping to improve the care at the scene and at hospitals. The U.S. military also transports and treats Afghans in limited cases, though doctors here said it’s enough to keep surgical teams busy and their skills sharp.

“The reason we take care of our Afghan colleagues ... is to help them survive, to increase recruiting (and) to increase boldness on the battlefield, until that Afghan military medical system can grow both in size and in capability,” Matthews said.

‘It’s the Super Bowl for us’

Roaming hospital halls last week, the shaved-headed colonel stopped to greet an Afghan double amputee in a wheel chair. He was the last of about a half-dozen Afghans with bandaged limbs, heads or eyes who’d been sitting in a waiting area earlier.

The man had first arrived in bad shape months ago, Matthews said. He seemed in good spirits on this follow-up visit, smiling and shaking hands with the Texan.

Medical professionals here have trained their entire careers to save troops broken and battered in battle, Matthews said, and Bagram is where they put those skills to use.